Google Assistant has picked up a bunch of features in the recent past. And as per a new report, Google is bringing its own take on in-app shortcuts for Google Assistant.

Noticeably, Apple’s Siri lets its users do more than just opening and closing the app using voice commands. It also lets you do some in-app specific tasks like, send a message, send a new tweet, etc.

Well, this feature, in a more Google-way, is now live for the Google Assistant. If you are unaware, we reported yesterday, that Google has already updated its Food Preference section.

It replaces the Food & Drink section and now recommends you with recipes based on your diet restrictions. Moreover, users have the freedom to select cuisine and ingredients as well.

In fact, the new section asks you some dietary questions like whether you are Gluten-free, Vegan, or Vegetarian. And based on this info, gives you recipe recommendations in a nicer looking grid-style interface.

Now, the addition of in-app shortcuts to Google Assistant can come handier as Google is trying to make it more intelligent. These shortcuts are similar to routines, which we had previously.

However, they are now restricted to specific actions related to an app you have installed on your Android phone.

Shortcuts lets you perform specific action related to an app

To set up new shortcuts, users have to go over to Assistant Settings. Here you will see a new alphabetically arranged list to get shortcuts.

Under the Shortcuts, there is a new tab called Explore. It is the place you will find all the recommended shortcuts for the apps installed on your phone.

Additionally, it also shows you all the list of shortcuts that are available for you. As noted by Android Police, for example, Twitter has three shortcut options, i.e. new tweet, new message, and see twitter messages.

Similarly, for Google Maps, you can use Google Assistant shortcut to open saved places or your timeline. You simply have to press the “+” icon to add the shortcut for any particular app.

Notably, all your enabled Google Assistant shortcuts will be shown in the next tab besides Explore, called Your shortcuts. You can add or change the default voice command from this section.

Furthermore, the shortcuts will also appear inside the Google Assistant routines option. But it will show you the shortcut in an entirely new UI.

Once you have enabled your convenient shortcut, you have to say Hey Google! followed by the shortcut command that you have set to trigger it.

Limitations of this feature over the routines are that users cannot create a Google Assistant shortcut to anything in any app. Developers have to implement this new functionally on their apps in order for it to work more freely.

Besides, these shortcuts can perform the only tasks at a time. Meaning that it cannot handle multiple actions within the app or several apps.

All in all, this is a good step towards the implementation of shortcuts to Google Assistant. It is rolling out to the user via a server-side update.

So, not everyone will be able to enjoy this feature as of now. If this has not arrived on your phone, then you should probably wait for the update to go live. 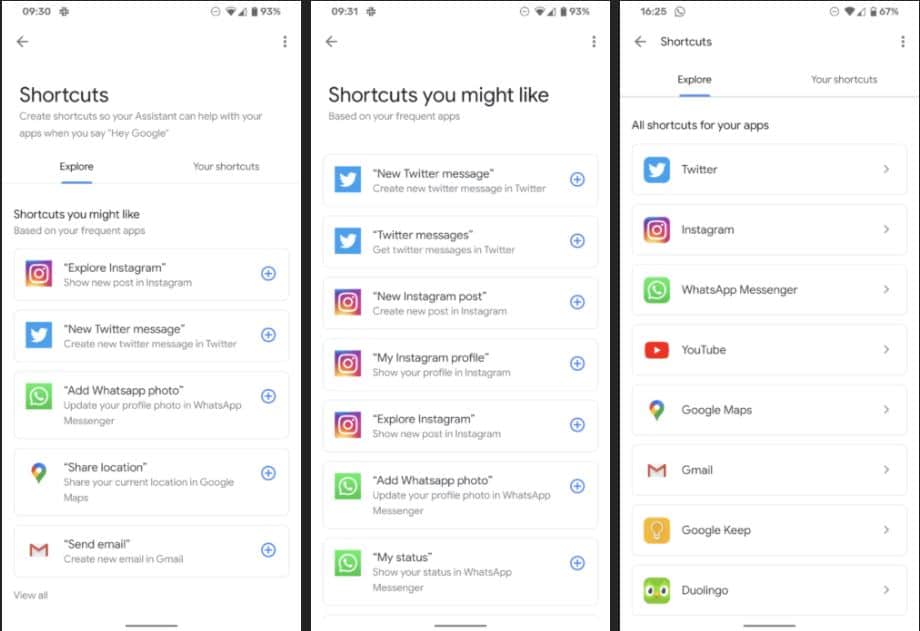