A couple of months back, HTC made its comeback to the high-end smartphone market by launching its first-ever 5G smartphone. The latest patent spotted by LetsGoDigital confirms that HTC is, after all, interested in the foldable smartphone segment.

The company filed the patent for the foldable display device on December 31, 2019. It was published by the USPTO (United States Patent and Trademark Office) on August 20, 2020. The company seems to have chosen the clamshell design for its debut foldable smartphone.

A new patent confirms HTC is working on a foldable smartphone

There are already foldable smartphones like Galaxy Z Flip and Moto Razr with the in-folding clamshell design. Interestingly, the HTC smartphone comes with an out-folding design. The currently used CPI (Colorless Polyimide) or UTG (Ultra-Thin Glass) protection for the foldables still doesn't offer the same strength as the regular Corning Gorilla Glass.

Even Huawei reportedly opting for the in-folding design after launching two foldable smartphones with an out-folding system. Prior to the smartphone days, HTC has launched quite a few clamshell feature phones with an additional display on the outside.

Comes with an out-folding clamshell design

From the images included in the patent, the hinge on this device slightly protrudes out of the body. As per the source, the patent is more about the hinge than the entire design. Hence, there is no mention of the cameras or any other hardware parts like buttons and ports.

According to the patent description, the hinge on the HTC's device will allow the foldable display to open at just two angles. It can be half-opened to use in the same way as the Flex Mode on Samsung foldables or completely unfolded to make it a regular candybar-shaped smartphone.

However, you should also note that not all the patents turn into actual products. Apart from launching its first-ever 5G smartphone, HTC also launched a bunch of affordable smartphones in the last one year. As of now, the HTC U20 5G is currently limited only to its home country.

Unlike the earlier launched U-series smartphones, the new U20 5G comes powered by the mid-range Qualcomm Snapdragon 765G 5G mobile platform. On the other hand, the company is launching the budget smartphones under the Wildfire in markets across Asia and Europe.

A recent leak revealed the design of the upcoming Wildfire E Lite smartphone. It sports an 18:9 display on the front with thick bezels on the top and bottom edges. 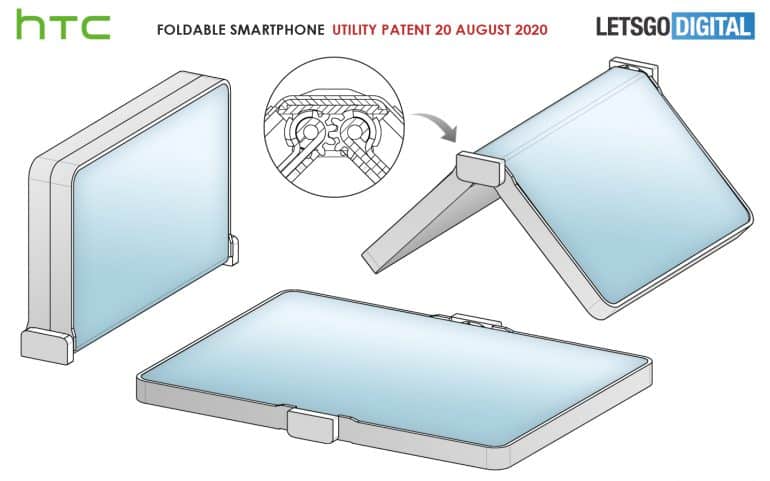