If you have been following us, then you would know that Google has decided to scrap the Google Play Music. But a new report highlights that the Play Music for Windows has already started shutting down.

For those who do not know, back in August it was reported that Google will end Play Music support by the end of this year. Especially, the US will lose access in October while both New Zealand and South Africa in September.

The good news is that the Google Play Music data will be available until December 2020. In the course of time, Google has done its best in transitioning its users from Play Music to YouTube Music.

The company is projecting YouTube Music as the replacement for the Play Music. Notably, Play Music users who have a subscription that goes beyond September will get them converted to Play Store credits.

In fact, Google also helped the Play Music users to transition over to YouTube Music by providing them a tool. However, the new post from AndroidPolice reports that for Windows, Play Music is already shut down.

Well, October is the month when the US users of Play Music will finally bid adieu to the service. But ahead of the eventual death, Google has already started shutting down the service.

The Google Play Music Manager desktop app which lets the users manage their Play Music uploads. Notably, a notification appears for users stating that “Music Manager is no longer available”.

Basically, as per Android Police, the pop up appears when you try to open the Google Play Music Manager app. It forces them to log back into the app.

Moreover, the Play Music download page also reads, “Music can no longer be uploaded to Google Play Music” and it redirects you to the YouTube Music transfer website.

So, it is high time for the Google Play Music users, especially in the US, to transfer their Play Music data to YouTube Music. Because it appears that the shutdown will be a gradual process.

And slowly the service will completely shut off before the arrival of the expiration date. You can probably still download your Google Play Music uploads via Google Takeout and transfer them to YouTube Music.

YouTube Music is also a featureful alternative. In fact, Google, in the recent past, has rolled over some key features and enhancements for the app to make it at par with Play Music. 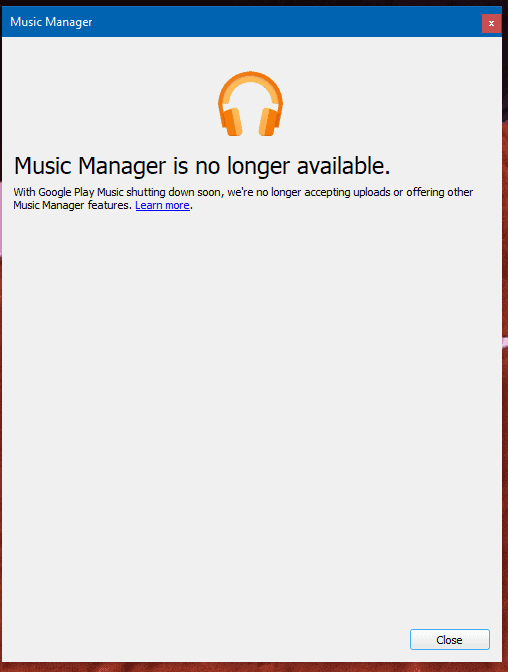