The update has been rolling out for the users for the past weeks or so. And with each passing day, more users are getting the taste of the new Google Photos Share menu.

The new Share menu replaces this long list with two apps, i.e. “Create link” and a “More” button. Once you tap on it, it will show you the native version of the Android share menu.

For the unaware, previously, it was like an app drawer, where you literally had to scroll through apps to find the apt one to use. This new Google Photos share menu gives you quick access to two of the most recent apps.

Moreover, this feature will definitely be a nice addition for the users who frequently use the Google Photos application.

The new Google Photos Share app is really a good move by the company to streamline with all the other apps. You now have a quick and easier way of sending files.

The new menu does not expand and stuck at a third of your screen. The More button holds all the other apps that you can make use to share files via Google photos.

The More option will show all the apps under vertical scrolling along with pinned apps and others. This is similar to the previous share menu, but it is now clubbed together under the More button.

Besides, this new features were first rolled out in limited capacity. However, now the new feature is live for almost all the users. Moreover, Redditors suggest that the feature has been rolling out quietly.

So, if you have been ignoring the app for quite a while or not using the in-app share menu, then it is time to check it out. And see if the new feature is available for you or not.

If the new version is not live for the users, then you might well head over to the Google Play Store and update the app from there. Or else you can grab the Google Photos app from the button below. 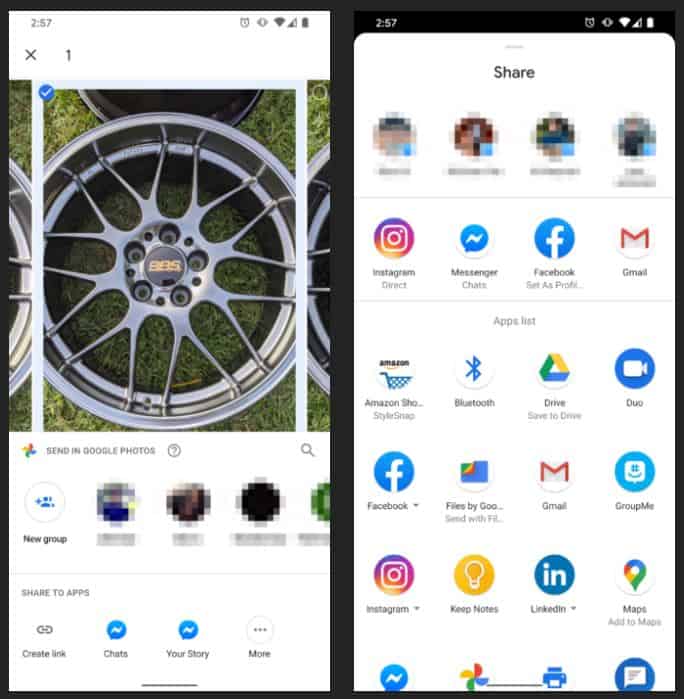