Over the last few updates, the Google Home app has received a lot of new features. However, the latest server-side update rolled out to some users has removed one of the basic features. Google Home users can no longer trigger Google Assistant routines within the app.

The routines allowed the user to trigger various actions with a single phrase. For example, the user can say “leaving home” to turn off all the lights and lock their doors. These work with all the Google Assistant-enabled devices and smartphones. In addition, users can do the same by installing the Google Home or Google Assistant app on unsupported devices.

The “Routines” shortcut in the quick actions tab is still present on the home screen of the Google Home app. Prior to the update, tapping on it would open up a panel consisting of preset routines. The user can manually trigger any of the routines with a single tap.

This used to be the most effective way of running the routines without any voice commands. With this new server-side update, the “Routines” shortcut will now open a whole new screen showing six preset routines. There is also a circular floating action button in the bottom right corner to create new routines.

There are still alternatives outside the app for manual triggering

Instead of running the routines, tapping on them will now let you customize how you want to run them. The new UI shows up on both Android and iOS versions of the Google Home app. This doesn’t affect users who prefer voice commands over manual triggering.

There are a couple of alternatives for still running the routines manually. However, this needs to be done outside the Google Home app. First off, the user can type the commands associated with the routines in the Google Assistant.

For Android users, there is a Google app called Action Blocks for adding widgets as shortcuts on the home screen. With the most recent version 2.27 update, the Google Home app has finally received the Dark Mode along with improved smart controls. Earlier this month, Google also added the controls for Nest x Yale locks to the Google Home app.

Interestingly, this is also enabled through a server-side update. Later this month, Google will be launching a new Nest Audio smart speaker as the successor to the Google Home speaker. 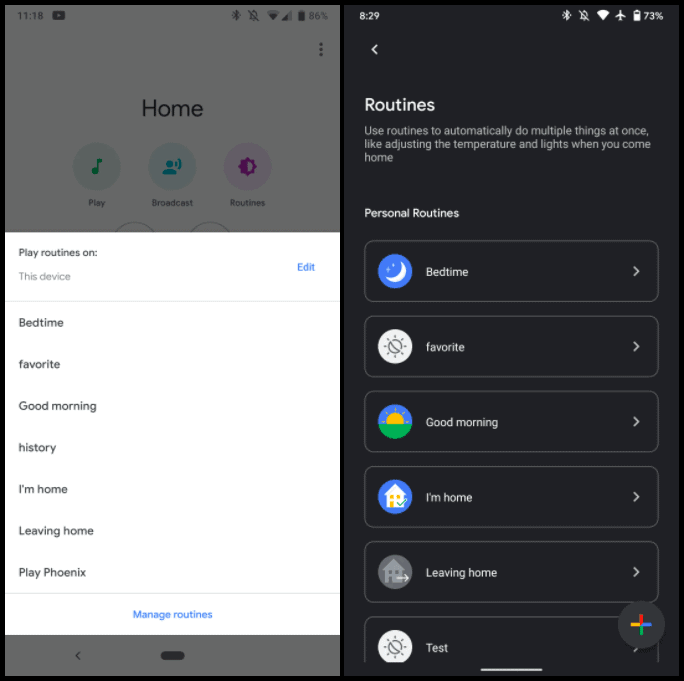