While the users can grab the app's latest APK file, this still doesn't guarantee that the feature will be available at the moment. As of now, it is available for a few Google Duo users with version 105.0.331. Moreover, there is no official confirmation from Google over the availability of the screen sharing feature.

A few Google Duo users getting the screen sharing feature

The users can expect the wider roll-out of the screen sharing feature in the coming days. The option to enable screen sharing can be found while on the video call. It is placed in the overflow menu that pops up when tapped on the three dots.

Before sharing the screen, the user also needs to acknowledge the prompt asking to confirm sharing the sensitive information displayed on the screen. Tapping on the "Start Now" button will now mirror the screen to the call recipient. When screen sharing is turned on, the user can no longer see the recipient in the PIP mode.

To indicate that screen sharing is enabled, there will be a Chromecast icon in red color. There will also be a notification for ending the call or just disabling the screen share. As per the source, the feature is working seamlessly even on a slow connection.

Compared to the screen grabs from 2018, the UI of the current version looks completely different because of the redesigned layout of the Google Duo app. Though Google Duo is available for both Android and iOS, the screenshare is currently limited to Android users.

The screen sharing feature is an integral part of any video calling service. With the people staying at home, Google Duo can be a good alternative to smartphone users for receiving or offering support remotely.

Earlier this month, Google also started rolling out the Google Duo for Android TV. With no app icon and unable to receive calls, it is still a half baked feature. Notably, the user also needs to connect a third-party camera for making video calls. Or else, there should be a smart TV with a pop-up camera as seen in the Chinese market. 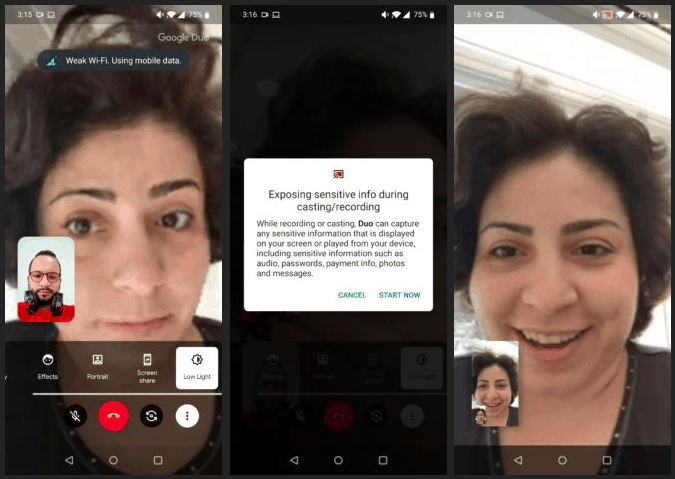