Google Chat will soon be adding read receipts for direct messages. Read receipts will appear as an avatar of the recipient, much like classic Hangouts. However, in Chat, the avatar will appear to the right of the last message they've seen, instead of appearing underneath the message. Something similar to Facebook Messenger's implementation.

Unfortunately, Read receipts aren't coming in group messages or rooms. While adding read receipts to rooms may not be feasible, it'd be nice to have these indicators in groups. Google will hopefully add them in the near future, as the transition from Classic Hangouts to Chat continues.

Classic Hangouts is shutting down for G Suite customers later this year, with Chat replacing it as Google's default chat application. The transition started in earnest in June, with free consumer accounts also steadily appearing to move to the new default platform.

Some Gmail users reportedly started receiving classic Hangouts messages in Google Chat last month. While that move was apparently unintentional, as Google isn't expected to make the free version of Chat available until Hangouts dies, it is certain that the transition is picking up the pace.

Some users reportedly received the same message in both Hangouts and Chat, adding to the confusion. However, as much as this has been a very confusing migration, Chat has also picked up several features from Hangouts over the past few months.

In July, Gmail got Chat integration, enabling G Suite customers to access Chat conversations right from Gmail. It was followed by an update for Chat which introduced a dark theme. Dark theme on Chat follows the system setting, with no in-app toggle to turn it on or off. That update also brought in some subtle UI changes to the mobile app.

Read receipts are yet another Hangouts feature that's now coming over to Chat. Google says read receipts for direct messages in Chat will be rolling out "no sooner than" October 5, 2020. The company will announce the exact time later. It expects the rollout to take more than 15 days. The feature will be available to all G Suite customers on Android, iOS, and the web version of Google Chat. 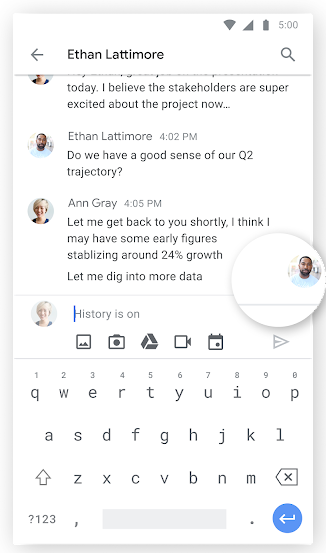