Skip to content
Advertisement
Trusted By Millions
Independent, Expert Android News You Can Trust, Since 2010
Publishing More Android Than Anyone Else
3
Today
85
This Week
634
This Month
3878
This Year
113918
All Time
Advertisement

The Samsung Galaxy S21 series was expected to arrive with the Exynos 1000, but that won’t be the case. According to a new benchmark, that appeared on Geekbench, a different Exynos SoC will be included.

The Exynos 2100 was mentioned on Geekbench, as the Galaxy S21+ got benchmarked. This is the first time we’re seeing this chip, so some of you are probably confused. Well, this is the Exynos 1000, in a way. Let me explain.

The next flagship SoC from the company won’t be called the Exynos 1000, it seems. Everyone assumed it will, as that’s the logical step after the Exynos 990. Well, Samsung apparently doesn’t think so.

For some reason, this chip will be called the Exynos 2100, at least if this benchmark is to be believed. A tipster, Digital Chat Station, has also confirmed some of the details of this processor.

He mentioned that the chip is based on a 5nm manufacturing process, and that it comes with eight cores. One large core clocked at 2.91GHz will be included, and accompanied with three large cores clocked at 2.81GHz.

Four additional ‘mid-cores’ will be clocked at 2.21GHz. The Mali-G78 GPU will be included in this package as well. That is everything the tipster mentioned.

The Samsung Galaxy S21+ surfaced on Geekbench under the ‘SM-G996B’ codename. Only the ‘Plus’ variant appeared, but the other two expected Galaxy S21 flagships will pack in the same processor.

The base Samsung Galaxy S21+ to ship with 8GB of RAM

That listing also mentions that the device will ship with Android 11. 6.77GB of RAM is also mentioned, and that’s not going to happen, of course. These benchmarks can be a bit off about such information, the base model will probably include 8GB of RAM.

The Snapdragon 875 is expected to fuel those devices in other regions, though that chip hasn’t been made official yet either. Qualcomm is expected to announce it later this year.

The Samsung Galaxy S21 series is expected to become official in the first quarter of next year. Samsung will probably announce those devices in either February or March next year.

Those three devices will likely resemble the Galaxy S20 series in terms of the design. Samsung almost certainly will not utilize under-display camera technology this time around. Such tech will have to wait for either the Galaxy Note 21, or the Galaxy S22.

As you can see, the launch of the Galaxy S21 series is still far away, so things could change. We’re basing this on the information that is rumored at the moment, of course. 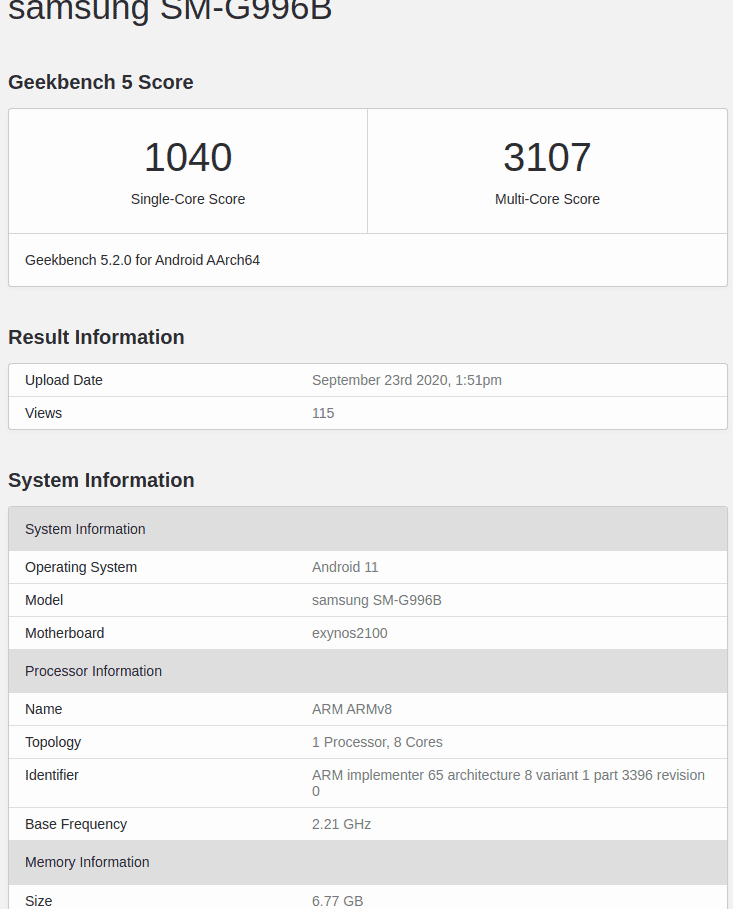