Facebook has taken another step to encourage voters to register by launching a national advertising campaign. As announced by the company in a blog post this will take the form of a weeklong registration drive on Facebook and Instagram.

Facebook has been strong advocates for encouraging registering to vote for some time now. It created a voting information hub earlier this year to help provide information and encourage people to register. However, the company has had issues with how it deals with political advertising and misinformation on the platform.

Ultimately, this Facebook national voters campaign will drive users back to is voting information hubs as reported by Engadget. The advertising will be focused in-app to try and encourage more of its users to register to vote in the run up to the U.S. election. 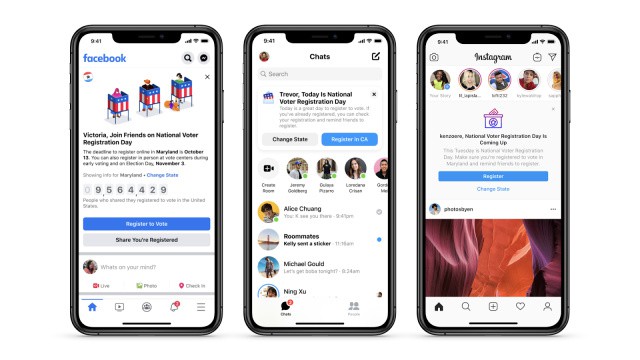 Facebook claims that its drive to encourage users to register to vote has helped 2.5 million people so far. However, the company has aims to get 4 million to sign up by election day on November 3.

Facebook says the campaign will run across “national broadcast, cable, radio, and digital homepage takeovers within lifestyle and news outlets". It also currently features front and center on its Instagram and Facebook apps for all to see.

This week of campaigning to get users to register will then culminate in a 'vote-a-thon' on Tuesday at 11 AM ET. The 'vote-a-thon' event will feature human interest stories and featured celebrities to celebrate the democratic process. This all began on Saturday when Facebook started to show users how to register to vote at the top of its apps.

This took users to the relevant page with their state’s official website where they could register. Facebook has committed to showing these links until September 25. Although registration deadlines vary from state to state.

Facebook has come in for criticism for allowing political organizations to post ads that contain lies. Whilst the likes of Twitter has banned political ads all together.

Mark Zuckerberg has publicly stated his worries about misinformation and the potential for civil unrest. As a result, he has vowed to take steps to slow the spread of fake news. However, many feel despite Facebook's efforts it still continues to flow all too easily.

Undoubtedly, this drive to get people to vote is a positive move from Facebook. The more people encouraged to vote the better and hopefully, this campaign will be as successful as possible.