Facebook is expanding its photo and video transfer tool to add support for two more third-party services: Dropbox and Koofr. Starting this week, Facebook users can transfer photos and videos they have uploaded on the social media platform to any of the two new cloud storage services. The platform already allows users to transfer files to Google Photos since June this year.

Facebook first launched its data portability tool back in December 2019, allowing users to transfer their photos to Google’s photo storage service. It was a limited rollout for users in Ireland, where the tech giant’s international HQ is based. Following several months of testing, the company rolled out the feature globally this June.

Now, it is expanding the feature to support two more services. Facebook users around the world now have three options to choose from if they want to move their photos and videos out of the popular social media platform. The company plans to expand this list soon, though it doesn’t specify which service it may seek to add.

“We’ve long believed that if you share data with one service, you should be able to move it safely and securely to another. That’s the principle of data portability, which gives people control and choice while also encouraging innovation,” said Steve Satterfield, Director of Privacy and Public Policy at Facebook.

You can access Facebook’s data portability tool through both the mobile app and the web version. It is available under the “Your Facebook Information” tab in Settings. You’ll need to re-enter your Facebook password before you can transfer your photos and videos. The files are encrypted during the transfer process. You will receive a notification on Facebook as well as on email when the transfer has been completed.

Facebook’s move comes ahead of a Federal Trade Commission (FTC) hearing later this month. The September 22 hearing seeks to determine the potential benefits and challenges of data portability.

Tech giants including Facebook have had to respond to numerous antitrust concerns surrounding their handling of user data in recent years, more so in the US and the European Union (EU). Europe’s new privacy law, called the General Data Protection Regulation (GDPR), explicitly requires data portability.

This could be one of the reasons why Facebook chose Koofr as a supported service. This Slovenia-based startup claims to have all its servers within the European boundaries. Facebook sees it as an EU cloud storage solution.

Facebook calls on policymakers to come up with clearer rules about what kinds of data should be portable. The rules should also define “who is responsible for protecting that data as it moves to different services.” 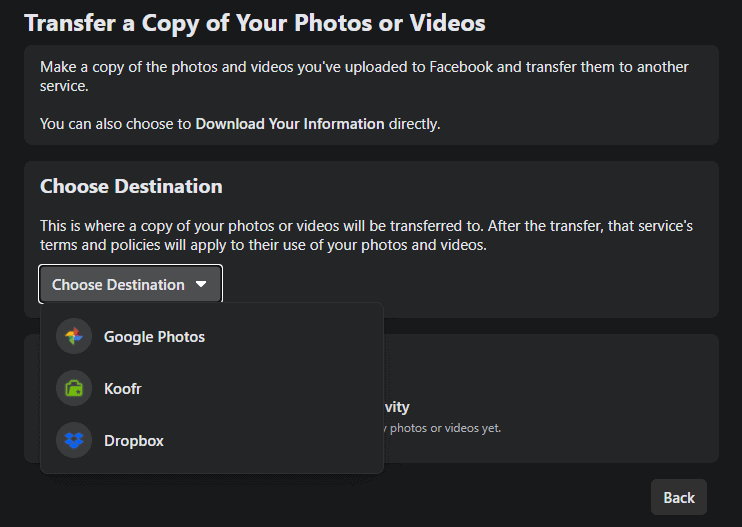