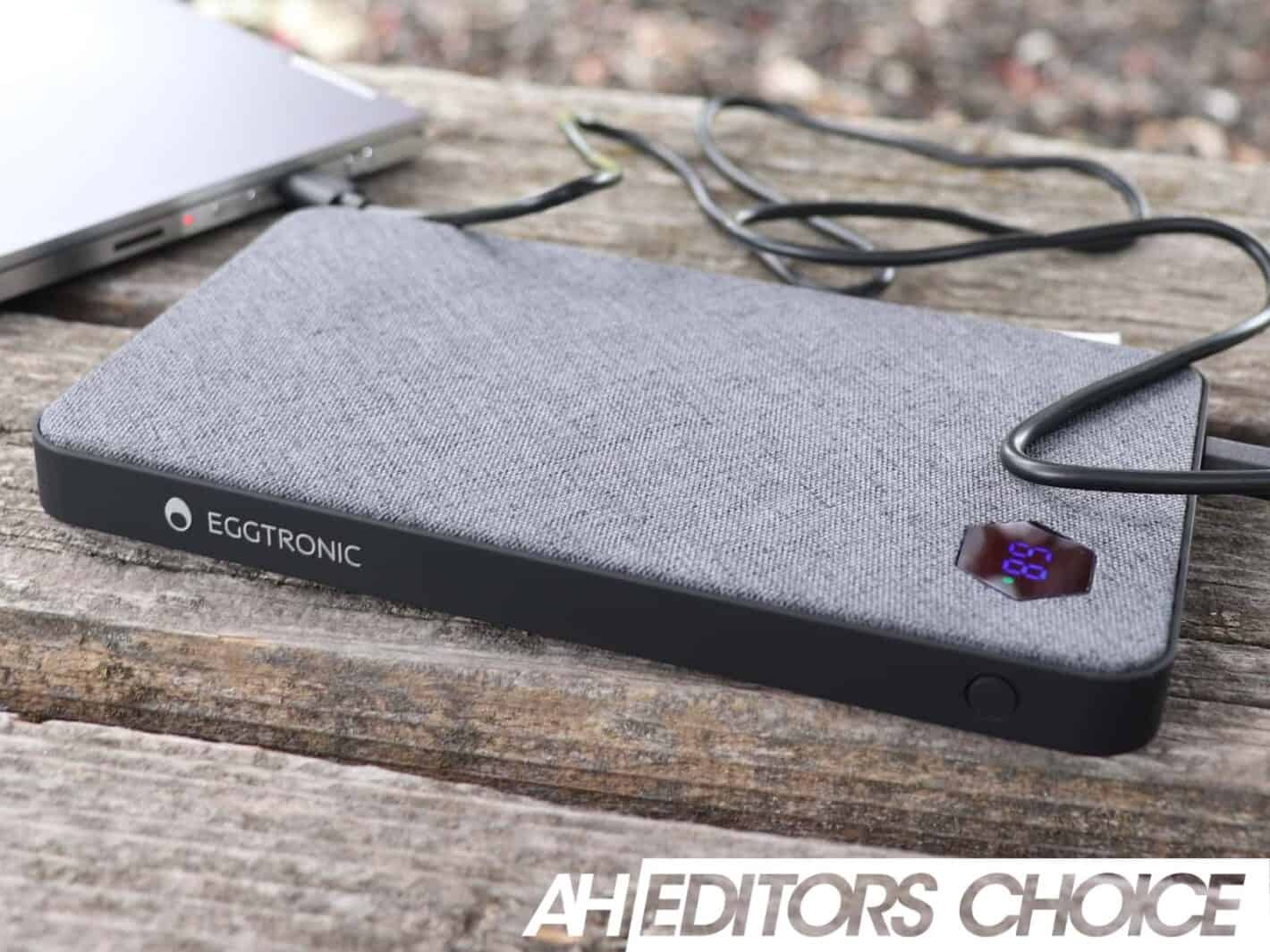 A decent power bank can be purchased for as little as $20 so it would make sense for anybody to balk at a price tag of almost $90. But, as with everything in life, you often get what you pay for. And the Eggtronic 63W Laptop Power Bank, sold as model PB1X20F and recently sent out for review, is no exception to that.

Not only is the company offering up this device with better build materials and a comfy sleek package. This Eggtronic power bank stands as one of the few devices meant to charge something as power-hungry as a laptop. It’ll accomplish that at a blistering 45W, in fact. So it’ll charge just about any laptop. That’s PD power too, so it’ll charge less needy devices at their max rate as well. Including smartphones and more.

The secondary ports, conversely, ensure that charging more than one device at a time, up to 63W total, is entirely feasible. And that same high-rate of charge applies to refill the bank. So there’s no need to wait a very long time in between charges. But the company didn’t stop there so that’s not all there is to be said about this gadget. Or any device priced at $89.90, really.

Additionally, the company didn’t and likely couldn’t build this battery pack to be the best suited for every scenario. So, let’s take a closer look at how this 20,000mAh capacity charging device works under real-world conditions.

Unboxing this hardware, it was immediately clear why the price is what it is

The first and most notable aspect of this Eggtronic 63W Laptop Power Bank, upon opening my review unit, was just how well-made it seemed to be. And that feeling that this was a high-end power bank didn’t change throughout the review either.

The sentiment most likely derives directly from the design language used here. The company wrapped its battery charging accessory in a firm, soft-touch TPU material and topped front and back by fibrous cloth. It’s larger than other power banks in terms of width and length. But it’s thin and fits nicely in-hand thanks both to its rounded corners and its low profile.

On one side of the gadget, there’s a display embedded in a similar fashion to a smartphone camera. That shows a green light to indicate when a device is being charged at the max rate. And it also lights up green when the power bank is charged. 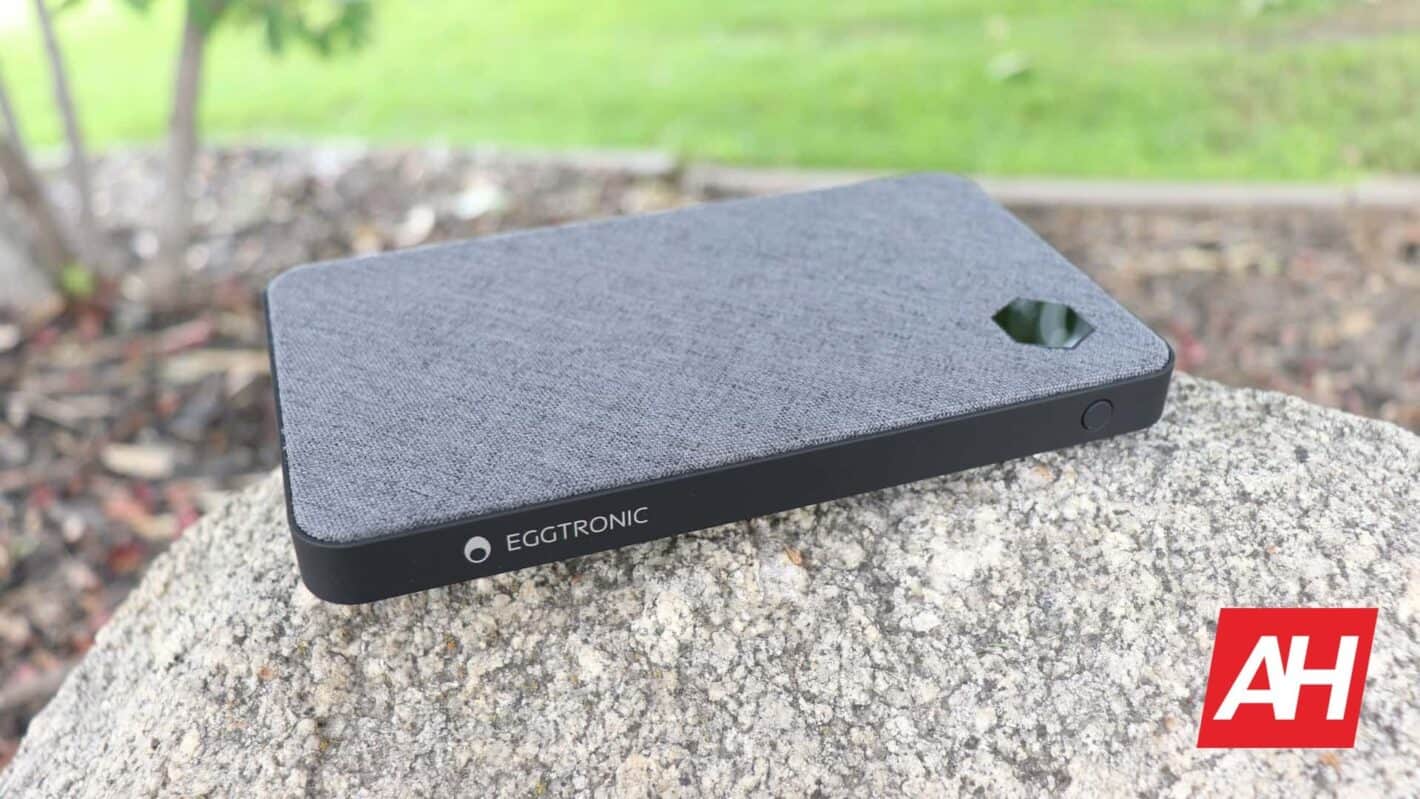 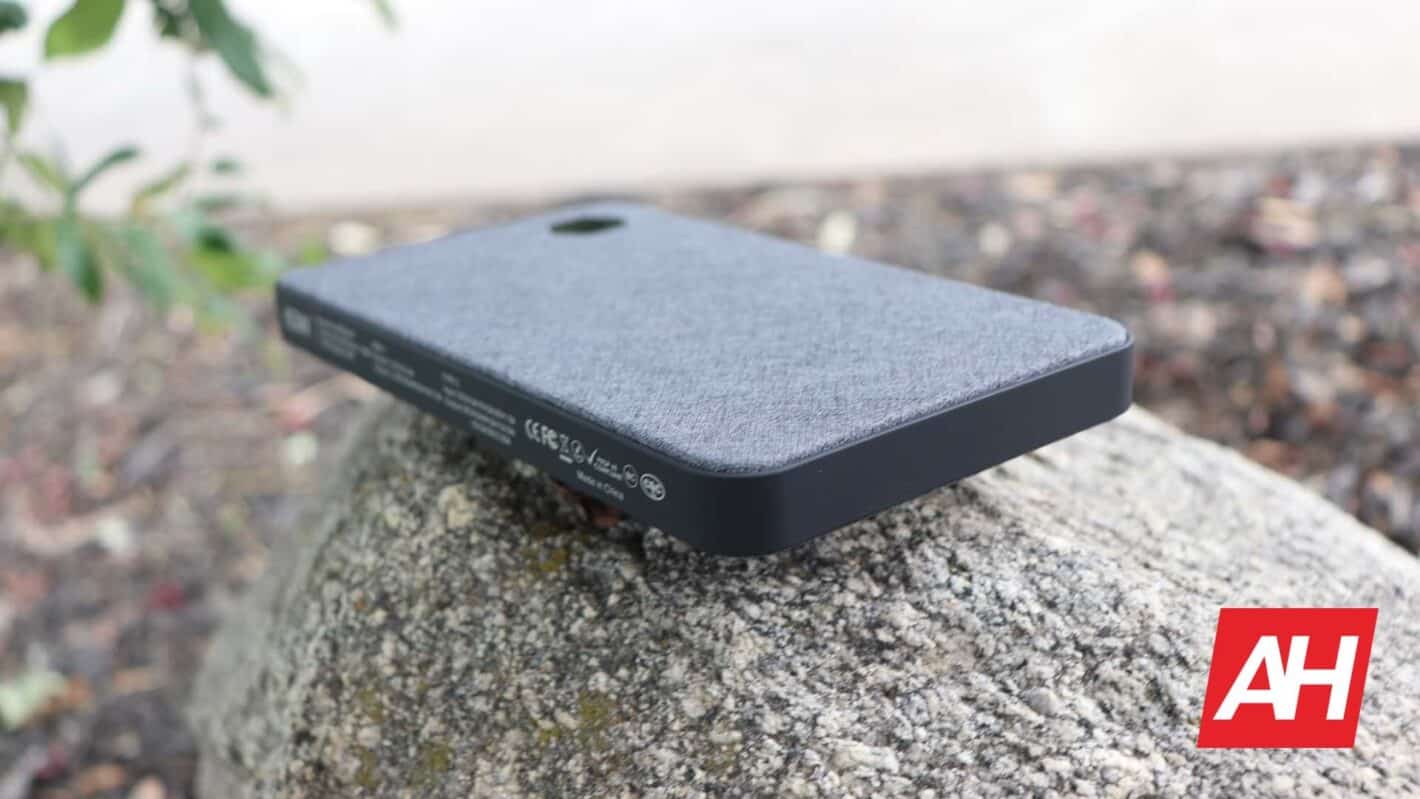 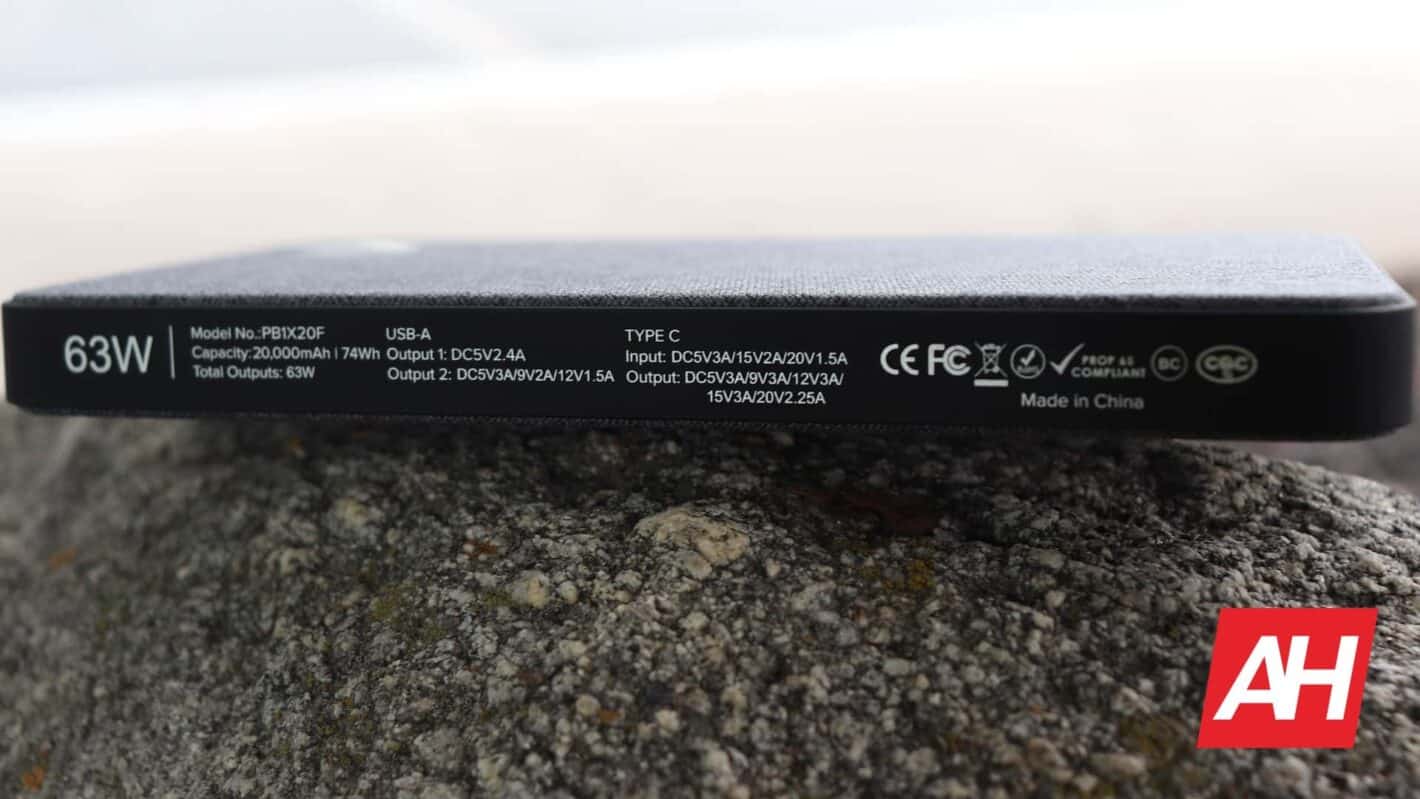 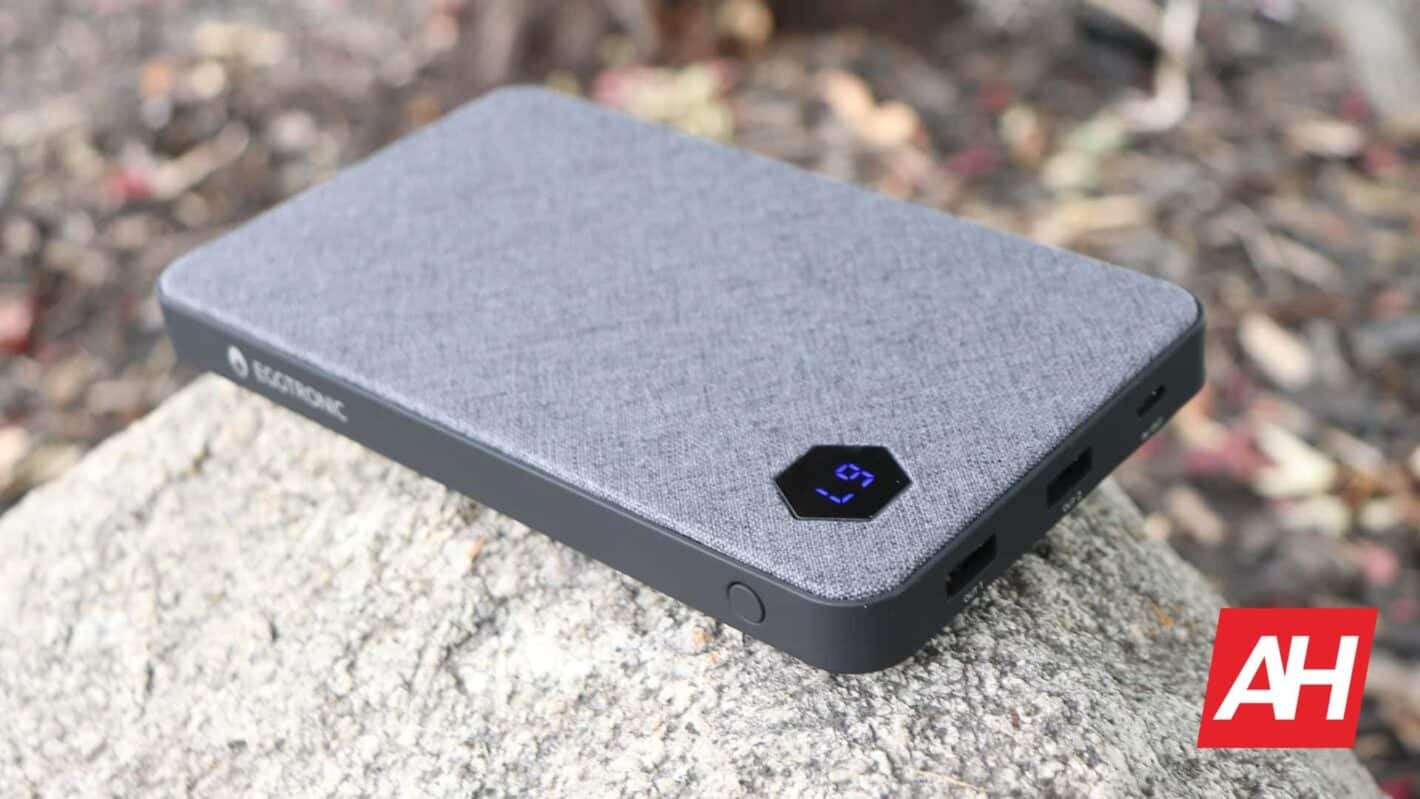 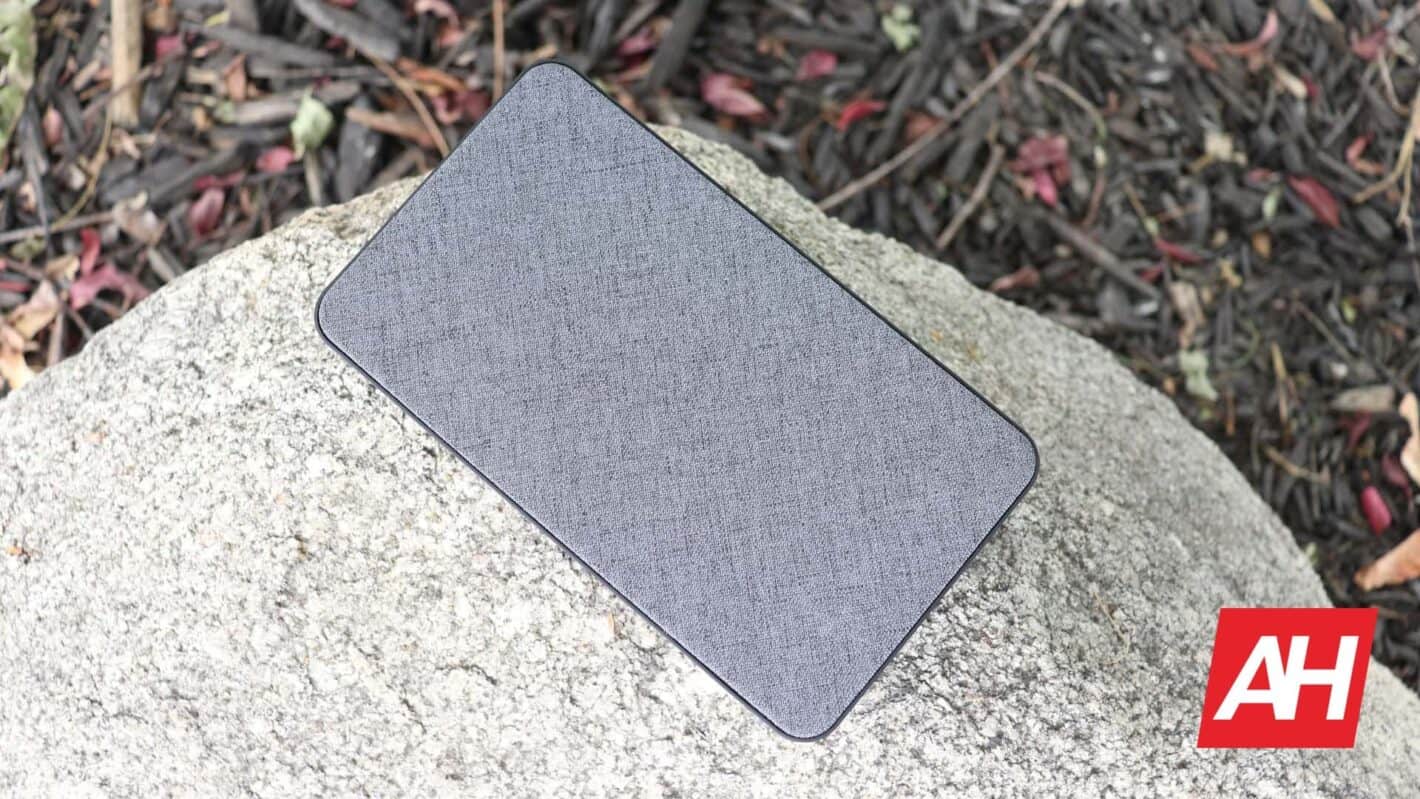 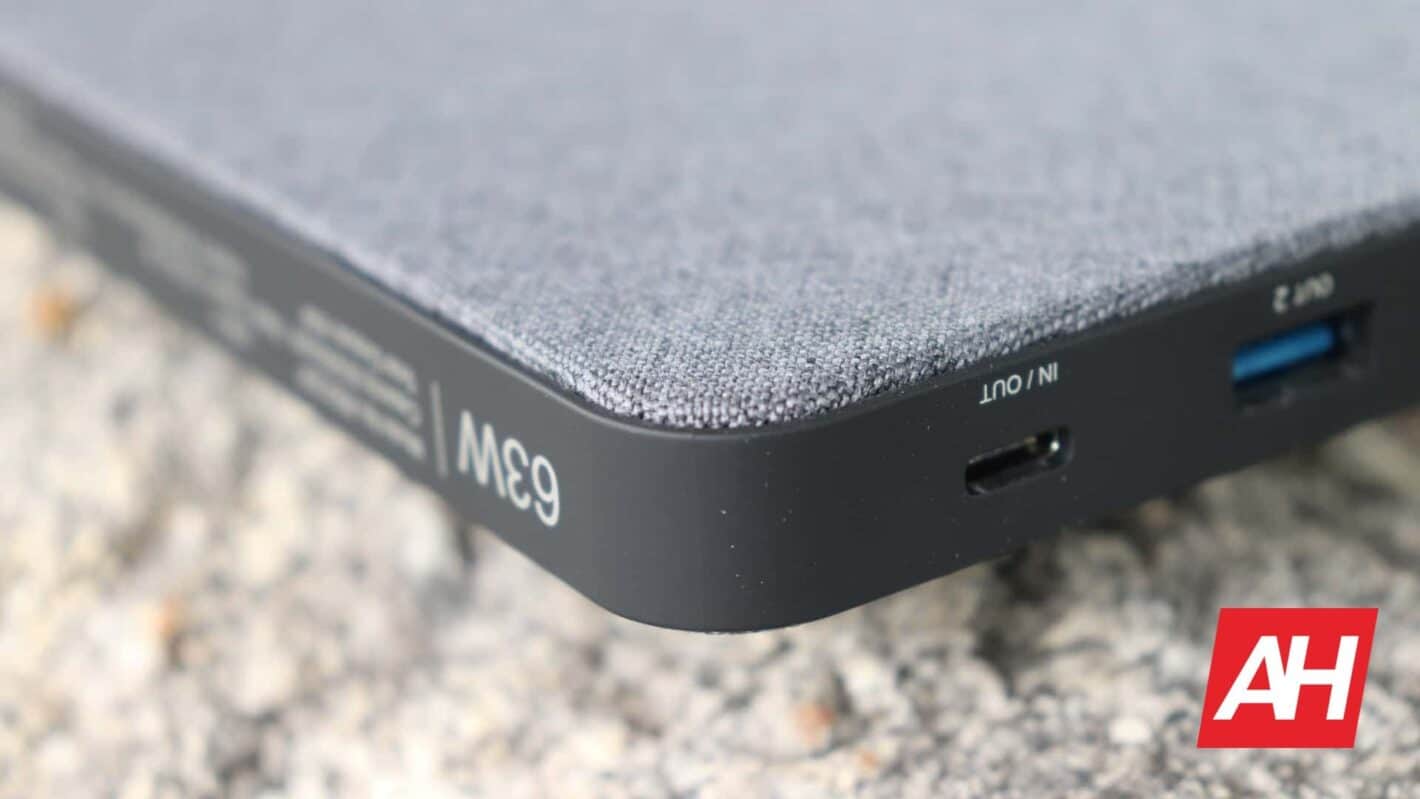 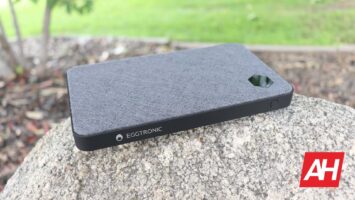 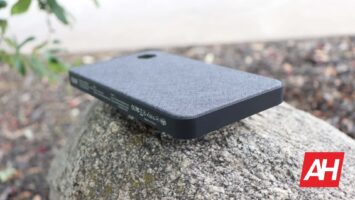 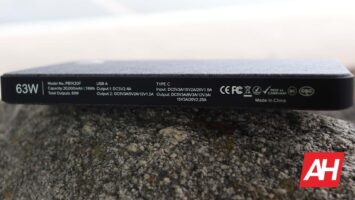 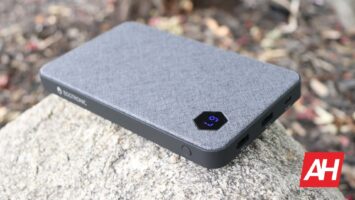 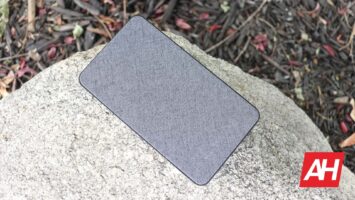 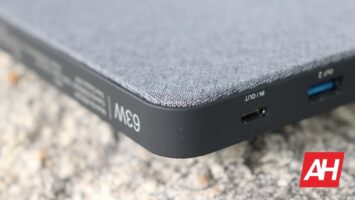 On the same side as the display, in the leading edge of the power bank, the company embedded a push-button. That clicks through satisfactorily, resulting in the display lighting up with a number. The number is the exact percentage remaining for the power cell. And that display is easily read under any lighting too, which is a bonus since that’s not always the case with power banks.

The only other marking on that side of the device is the branding. That stands out as a stark white against a color that’s closer to black than gray.

Along the opposing edge, the company embedded details about the power bank, charging rates, and certification, colored in white against the same gray hue. And taking up most of that edge.

That gives this power bank a functional, minimal aesthetic. As do the markings above the three power ports — embedded on one of the short edges. Those ports are snug and well-separated, making it easier to use more than one port. The company marked the ports for their usage. It marked the USB-C port “IN/OUT” and the USB-A ports “OUT 1” and “OUT 2.” Appropriately enough.

Simultaneously, it colored the ports for easy identification. It packed in the USB-A OUT 2 port in blue coloration. So that port stands as a USB-A 3.0 SuperSpeed port. The OUT 1 port is a standard USB-A port.

The Eggtronic 63W Laptop Power Bank is all about charging and discharging so how does it do?

In terms of charging and discharging, this Eggtronic-branded Laptop Power Bank worked a lot like any power bank under review. There is one caveat to that, which we’ll cover momentarily. But use is very straight forward. Users simply choose the port they need and charge their devices like normal.

One differentiator is that this power bank is meant to charge laptops. As such, it’s a 20,000mAh, 63W maximum — for all ports at once — charger. The main USB-C port can charge at up to 45W. With that power output and capacity, this should charge most laptops at least once. The Samsung Chromebook Plus, for instance, has a 5070 mAh cell. That means this laptop charger should charge that battery at least three times.

It should also mean it charges such a laptop, or any laptop with a 45W charging rate or less, at its maximum rate. But it won’t. At least not for Chromebooks. And that marked the biggest caveat noted during this review. Any attempt to charge any of my Chromebooks during this review required the device to be on standby or turned off. And that wasn’t the case for other laptops. Otherwise, my Chromebook tried to charge the power bank instead.

That’s a fairly big caveat for a laptop charger but since most users won’t be on a Chromebook or charging their Chromebook while using it, it’s not at all a dealbreaker. Or, at the very least, that won’t be a dealbreaker for most users.

On the recharging front, the Eggtronic 63W Laptop Power Bank charges at its maximum rate too. That means I was able to hook it up to a compatible wall adapter and fill the battery up much more quickly than is usual for power banks.

A full charge took 3-hours and 45-minutes. That’s not bad for a device that will charge almost any phone at least 4 times and most laptops at least once. And it didn’t heat up at all during charging, although using an under-rated power adapter or cable will cause those to heat up quite a lot.

This power bank from Eggtronic is worth every penny

As noted at the beginning of this Eggtronic 63W Laptop Power Bank review, battery banks are plentiful when it comes to options. And, as a result, as often as not, there’s reason to hold any kind of loyalty to brands or to a particular form factor. But it isn’t every day that a new battery bank comes along that’s tailor-made for larger devices. And that sets this gadget apart.

Or, at a minimum, that’s what sets it apart as much as anything else does. The design, materials used, and overall construction, however, just add more. Specifically, more ways this power bank from Eggtronic shows that it’s not just another battery charger.

Unfortunately, this gadget won’t charge up a Chromebook. Or, at the very least, it won’t while that gadget is powered on at all. It absolutely will charge just about anything else that can be via USB-A or USB-C cable. And it will do so quickly, without heating up.

As an accessory, the Eggtronic PB1X20F 63W Laptop Power Bank isn’t a feat of engineering. But it is among the best looking, most capable 20,000mAh battery banks around. And, at just under $90, it’s a great value. Well worth every penny of its asking price and then some.