Samsung notes that the market for premium Android tablets is actually on the rise. Sales for devices priced at $350 and more have grown by 230-percent in 2020. The company is taking advantage of that to deliver a comparatively stunning number of new features. That’s setting aside hardware improvements. The Samsung Galaxy Tab S7 and Tab S7+ aren’t just iterations by any stretch of the imagination.

Instead, the company appears to be aiming the tablets at picking up where Android’s maker has failed. Namely, to take its Android tablets to the next level, compete directly with Apple, and potentially lift the entire market. 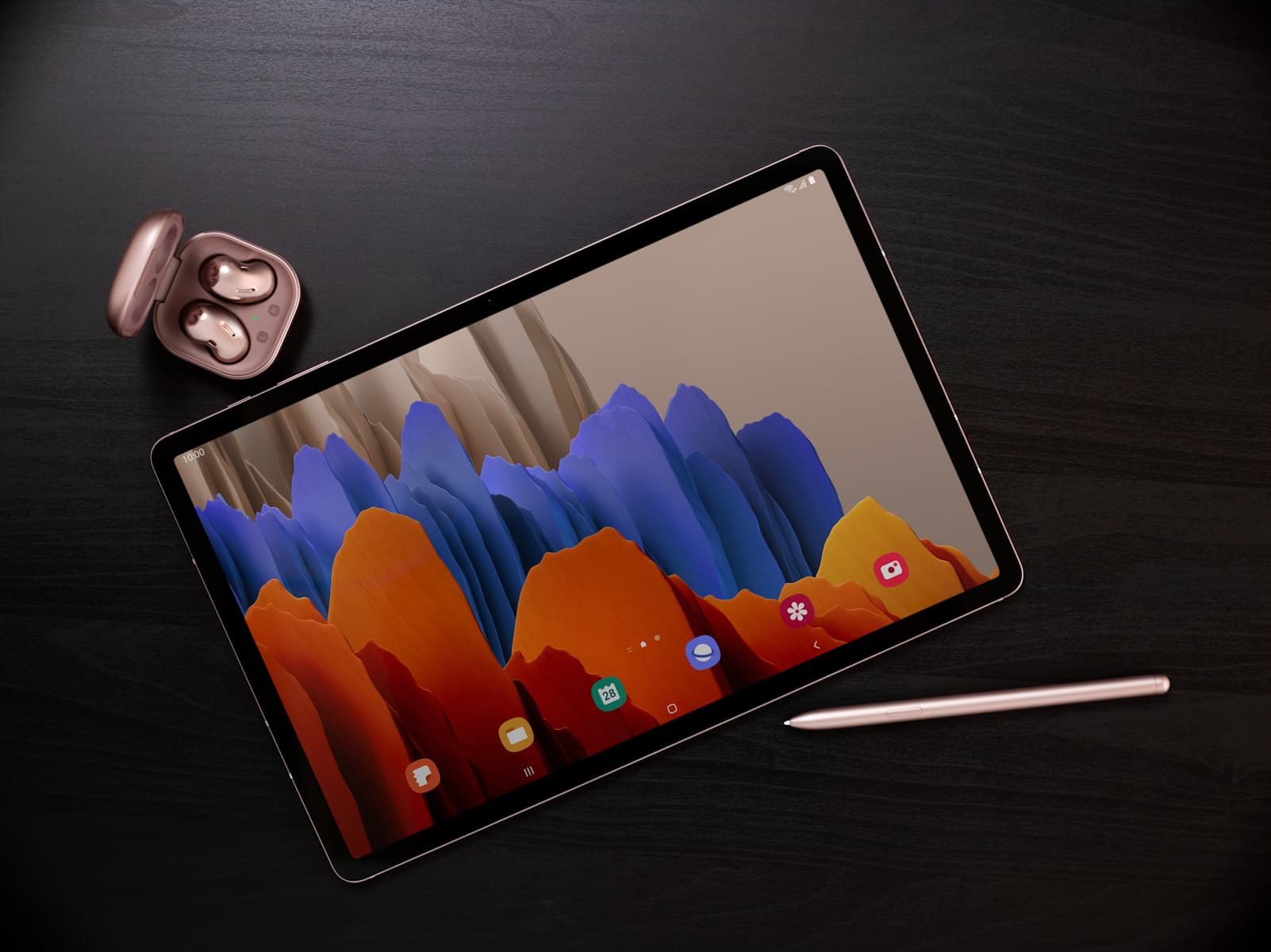 On the design front, aside from some new colors and size changes, these gadgets won’t be too different from the Samsung Galaxy Tab S6. Samsung has launched the Galaxy Tab S7 and Tab S7+ in an 11-inch and 12.4-inch design, respectively. The former of those is, of course, smaller. But it’s also somewhat thicker at just a hair under a quarter-inch thin. That’ll measure just over 6.5-inches by 9.99-inches.

Aside from the size, the devices will both be available in similar colors to the Galaxy Note 20 series. Namely, that’s Mystic Black and Mystic Bronze. But it will eschew the white coloration in favor of Mystic Silver as a third option for buyers. The front-facing camera will sit in the top-bezel when held in landscape mode horizontally.

The pen, of course, has also been redesigned. It now much more closely resembles a rounder, more pricey traditional ink pen. The sleeker design is larger than that found in the Galaxy Note 20 series, allowing for more natural writing and drawing experiences.

Like last year’s Galaxy Tab S6, Samsung is continuing its tradition of including four speakers. Those are tuned via Sound by AKG and pack Dolby Atmos support. And they’re arranged symmetrically around the left- and right-hand edge when held in landscape orientation.

Displays serve as the biggest differentiator 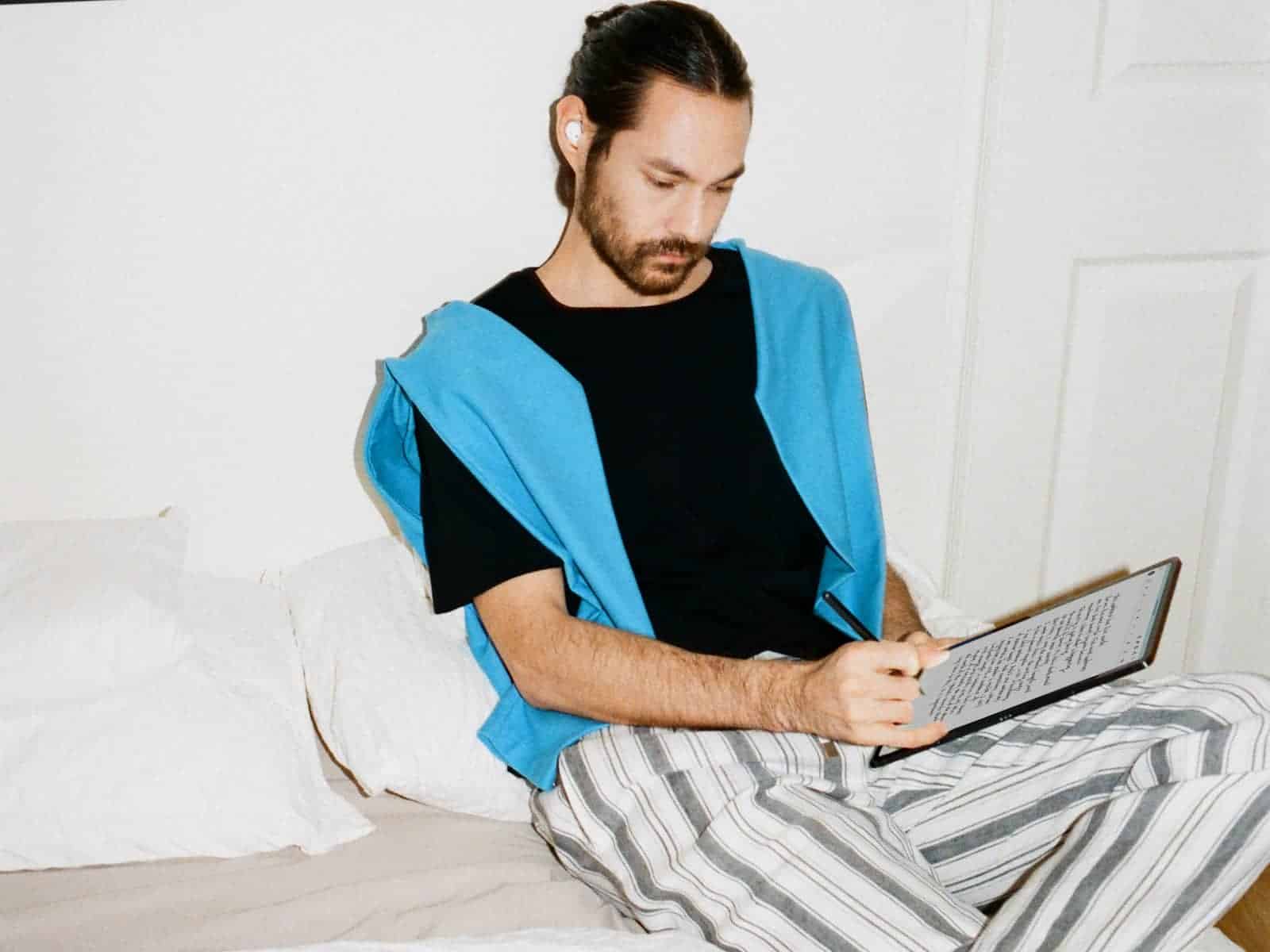 The specs on these two tablets are going to be almost identical. That extends to just about every facet for the Galaxy Tab S7 and Tab S7+ as laid out at Samsung Unpacked 2020. But, as denoted by the branding, they aren’t completely identical. And one of the biggest differentiators is going to be the displays, just like the company’s new flagship mobile devices.

This tablet series is delivering on a number of ‘firsts’ for the industry. That’s because as mentioned above, they’re intended to set a new trend for others to follow. That all starts with the displays. Or at least the display on the larger of the two tablets. At launch, the Samsung Galaxy Tab S7+ will be the only tablet available with an over-12-inch Super AMOLED screen.

The 2,560 x 1,600 resolution WQXGA LTPS TFT panel in the standard Samsung Galaxy Tab S7 is nothing to scoff at either. And that measures in at a dead-even 11-inches. So either of these tablets is going to offer plenty of screen real-estate.

But that’s not the only boundary Samsung hopes to push the envelope on here. The larger of the two tablets sees the return of an in-display fingerprint reader. For the smaller gadget, as noted earlier, that’s placed in a side-key.

Because this is also intended to be a gaming and entertainment tablet, the company isn’t holding back on the refresh rate either. In fact, it’s ensured that both of these tablets feature a refresh rate of 120Hz. That’s double the refresh rate seen in the devices’ predecessor, the Samsung Galaxy Tab S6.

100% color gamut and HDR support are a part of this package as well. 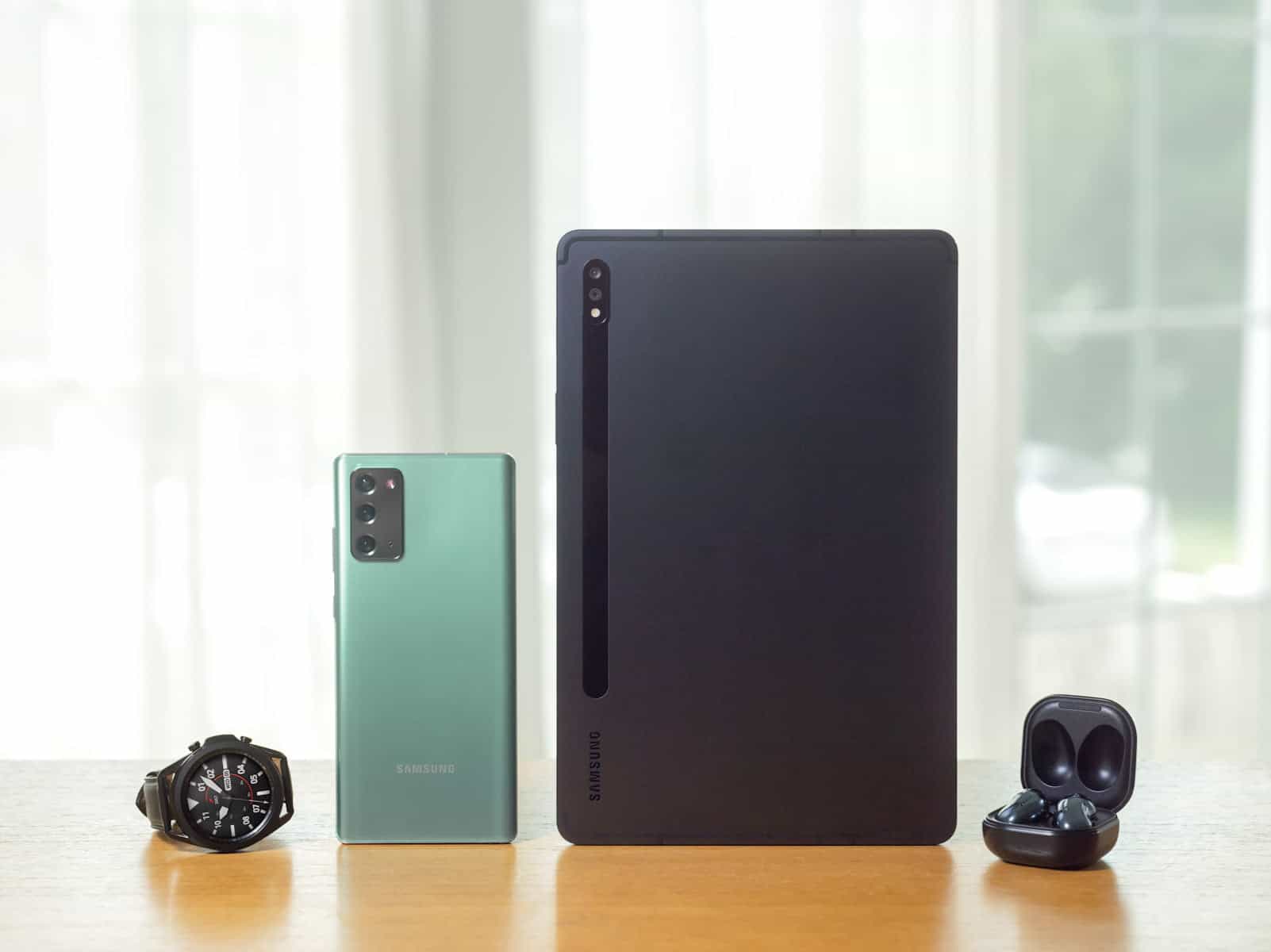 Samsung Galaxy Tab S7 series is delivering a new wave of next-gen technologies on the connectivity front too. Or, at the very least, it’s delivering the latest bleeding-edge variants of those. That includes not just support for LTE Cat.20 6CA — widely reported to support up to 1.2Gbps speeds. And it doesn’t just include support for Wi-Fi 6 and older protocols or Bluetooth 5.0 either.

Samsung’s Unpacked event also revealed that both the Galaxy Tab S7 and Tab S7+ will be the first US tablets with 5G support.

Both devices, continuing in the vein of connectivity, will also support storage expansion via microSD cards. Both will also have a USB-C port for charging and OTG functionality. And there will be a Samsung Galaxy Tab S7 and Tab S7+ book cover with a full-size keyboard for users to gain even more productivity in addition to the S Pen. Presumably, that will link up via pogo-pin, similar to the Galaxy Tab S6.

The new cover will pack a larger touchpad than its predecessor, dedicated function keys, and keys specific to the OS. In this case, there are also going to be gestures via the accessory for accessing recent apps, the home screen, app switching, and a “back” gesture.

The final noteworthy connectivity point, driving the technology forward, is DeX Wireless. Also unveiled for the Samsung Galaxy Note 20 series, the feature will turn on automatically when linked to the keyboard. But it will also be used wirelessly with any Miracast-enabled smart TV or display. That includes every Samsung smart TV from 2019 or later.

For the uninitiated, DeX allows Samsung devices to access a full desktop experience that’s not wholly dissimilar to Windows. And that includes support for external accessories such as a mouse and keyboard. So users will be able to link up to an external display for a plethora of features, including a full PC-like experience.

The S Pen is back and better than ever 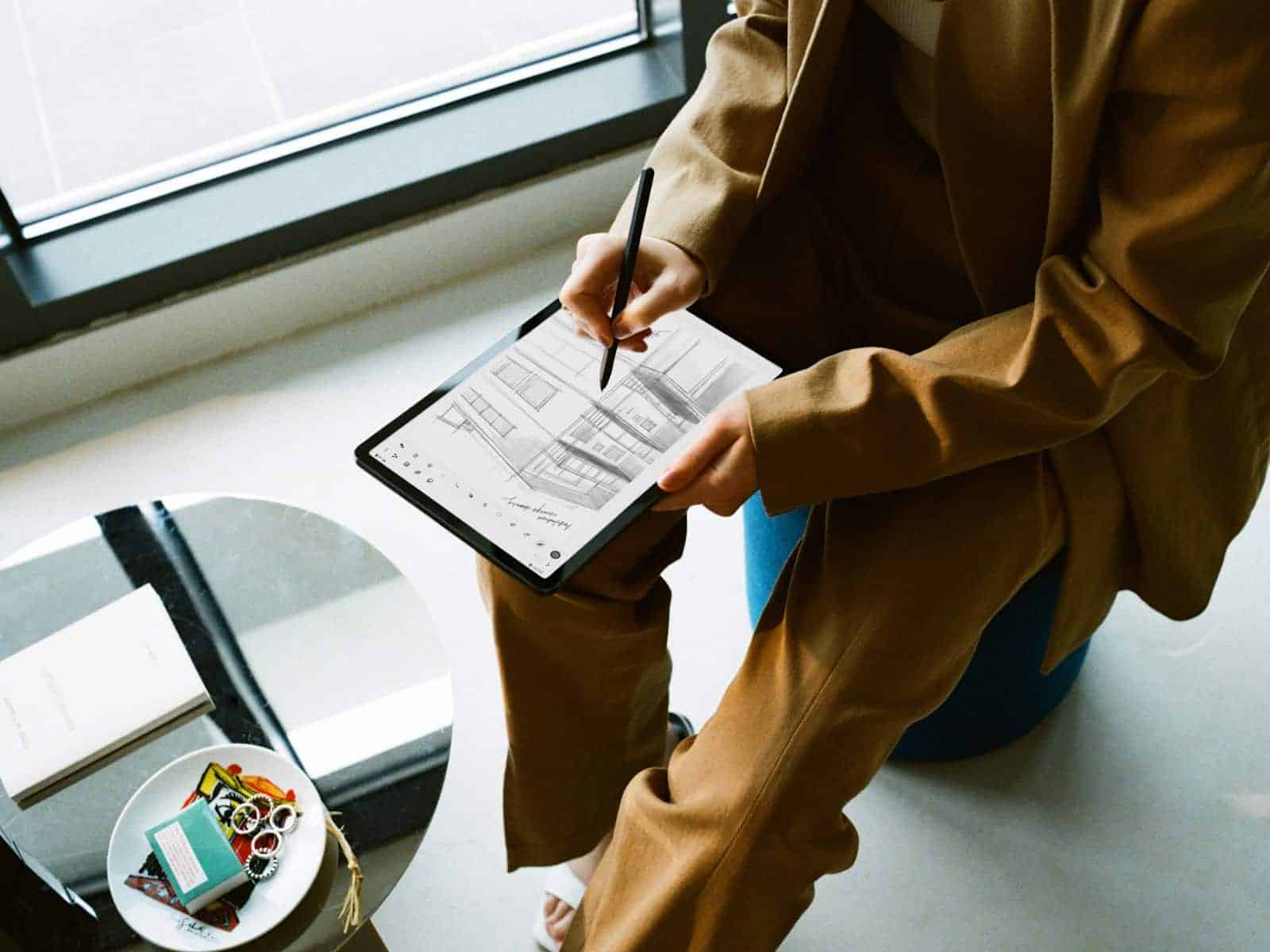 Speaking of accessories, Samsung says its universally recognized S Pen will make a return with the new Galaxy Tab S series. Here, that pen-like stylus has been redesigned and steals functionality from its flagship smartphone counterparts. The design should be more comfortable to use as well.

But the biggest updates to the S Pen appear to be split across two categories. First, Samsung indicates it has reduced the latency of the S Pen significantly. Now, the difference between on-screen motion and response is only around 9ms. That approaches the response speed of the best available gaming monitors and, according to Samsung equates to a much better experience overall.

In particular, Samsung says the pen is now much more capable of replicating a true pen-to-paper writing and drawing experience.

There is also a much wider assortment of gestures and features, as noted above, taken directly from the new Galaxy Note 20 series. That includes new software-specific features that’ll be covered momentarily. But new gestures couple with those introduced in the Galaxy Note 10 series. So users can start by controlling camera functions such as zoom and switching between primary and selfie cameras.

The new additions, conversely, are all tied in with navigation. That allows better control of the overall OS with the S Pen. But also better granular control in some apps, such as slideshow apps. 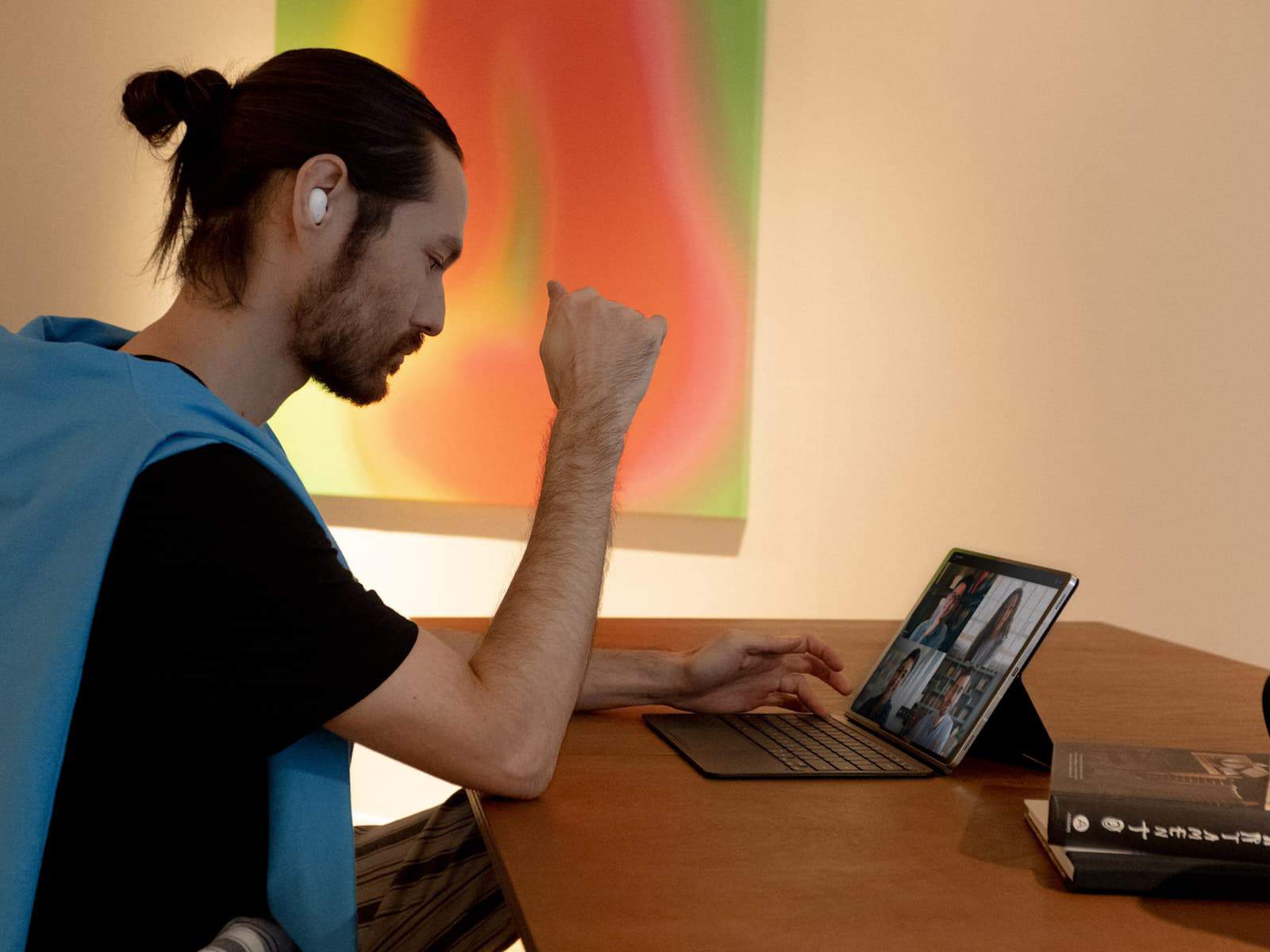 The cameras on the Samsung Unpacked-announced Galaxy Tab S7 and Tab S7+, meanwhile, are much closer to a smartphone configuration. That, again, starts to bridge the gap in pursuit of a more flagship-like experience. Samsung kicks that off by bumping up from a single camera sensor to two, with the new tablets. And those are accompanied by a flash this time around.

The Primary cameras here are a 13-megapixel primary shooter and a 5-megapixel ultra-wide lens. More details about the capabilities and features found in the software for those will undoubtedly be forthcoming as Samsung begins laying out a more detailed look in the lead-up to launch.

On the front, Samsung includes an 8-megapixel camera for selfies and web conferencing. 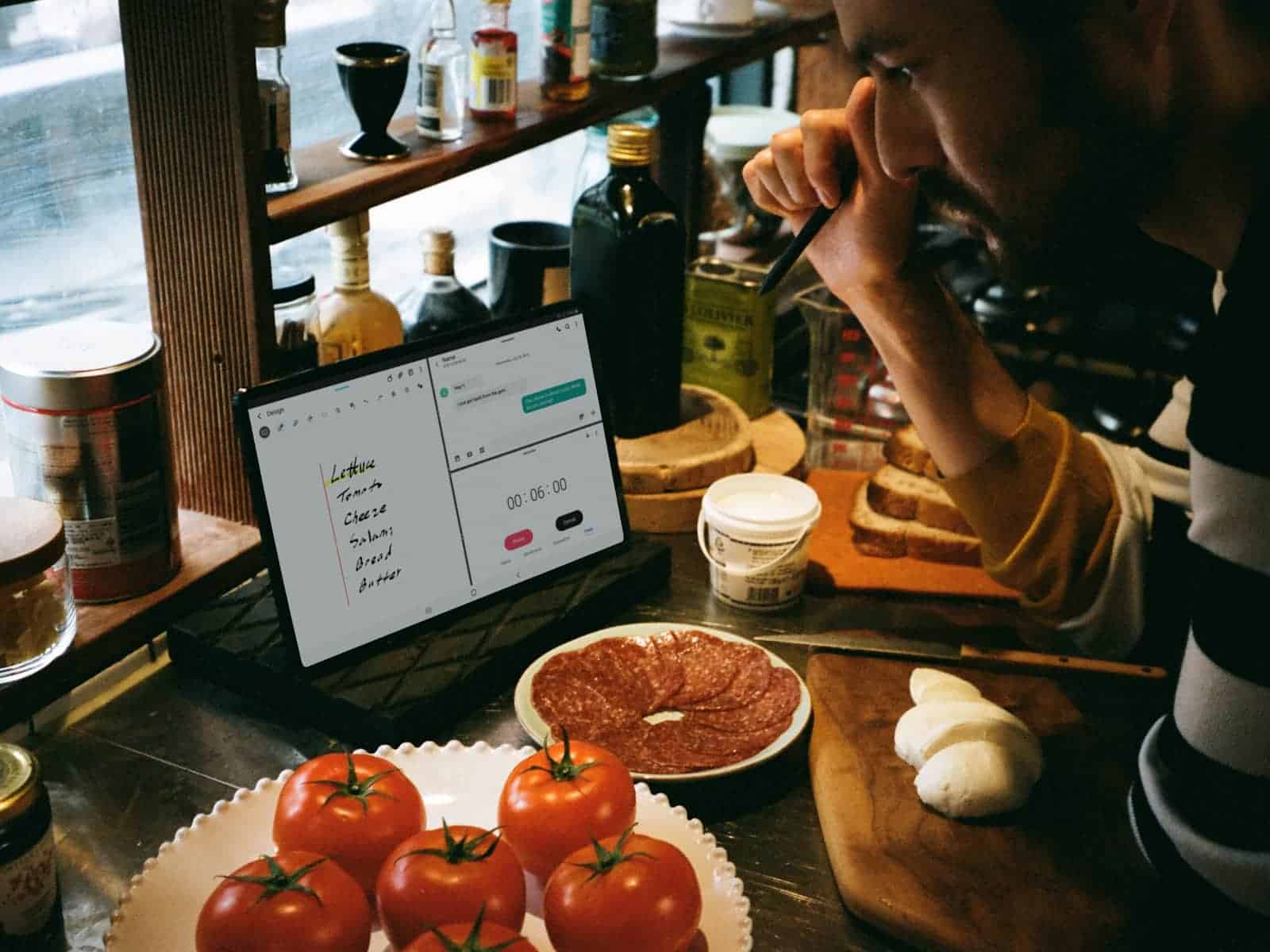 Now, Samsung unveiled a plethora of new features on the software side that are mostly to do with its Samsung Notes app and a new Microsoft partnership. And it’s the latter of those that are going to be most prevalent here. Not only is Samsung making Microsoft’s leading key software available via DeX and on the devices. That includes Word, Excel, Powerpoint, and more.

Samsung is also ensuring that these gadgets can link to Microsoft Windows for a multi-window experience that works with up to six displays. Additionally, reminders will be syncable with outlook and To-Do. And Samsung Notes, which we’ll get to momentarily, can be synced in real-time with Outlook and OneNote.

More interesting though, is Samsung’s partnership with Microsoft on Xbox Game Pass. Through integration with Xbox Game Pass Ultimate, Samsung Galaxy Tab S7 series users will have access to optimized cloud gaming. That’s access to games and the gaming community, directly from the tablets on Wi-Fi, 4G, or 5G.

Samsung also revealed this feature for its new Galaxy Note 20 series. And here, that’s going to work the same.

From launch, users will have access to more than 100 games, streamed from the cloud, for gaming from anywhere. As revealed at Samsung Unpacked 2020, the Galaxy Tab S7 series has been optimized for Bluetooth and Wi-Fi connections. That’s in addition to mobile data optimizations. The former allows Bluetooth controllers to be used with no hassle. And that should be a latency-free experience.

Cloud gaming here allows instant game loading and switching, effectively equating to pro-grade PC gaming. But without the need to download or spend a lot of time installing and booting games up.

New Samsung Notes features are coming over from the Galaxy Note 20 series too. That includes the real-time syncing mentioned above, across PC, tablets, and phones. But it also includes new additions such as the ability to attach and time-sync voice recordings with the notes that are taken. That should make the tool much more useful in lectures and similar circumstances. PDF features are coming too, from PDF animation to auto straightening when saving as a PDF.

And all of that is easier to organize than ever. Samsung has reworked the app to function with a customizable file directory structure. That means Notes notes are saved in a hierarchy of customizable folders and individual files. Similar to how file management works on desktop systems and directly accessible from within the app’s overflow menu.

Now, parsing out the differences between these tablets is going to be a bit of a challenge. So here are the full specifications of the Samsung Galaxy Tab S7 and Galaxy Tab S7+, as provided at launch.

As of this writing, Samsung hasn’t provided many details about exactly where its new Galaxy Tab S7 or Tab S7+ will be made available, although that news will probably begin to become available shortly after Unpacked ends. Samsung says they’ll be available ‘this fall’. So it isn’t immediately clear whether any specific carrier or region will have the gadgets. The company also didn’t discuss battery size or life right away. But Samsung has already talked pricing.

The Galaxy Tab S6 started out at $649 for the Wi-Fi variant and so will Samsung’s Galaxy Tab S7. That price is for the 11-inch model of the newly announced tablet. Details about 4G and 5G carrier variants have not been revealed.