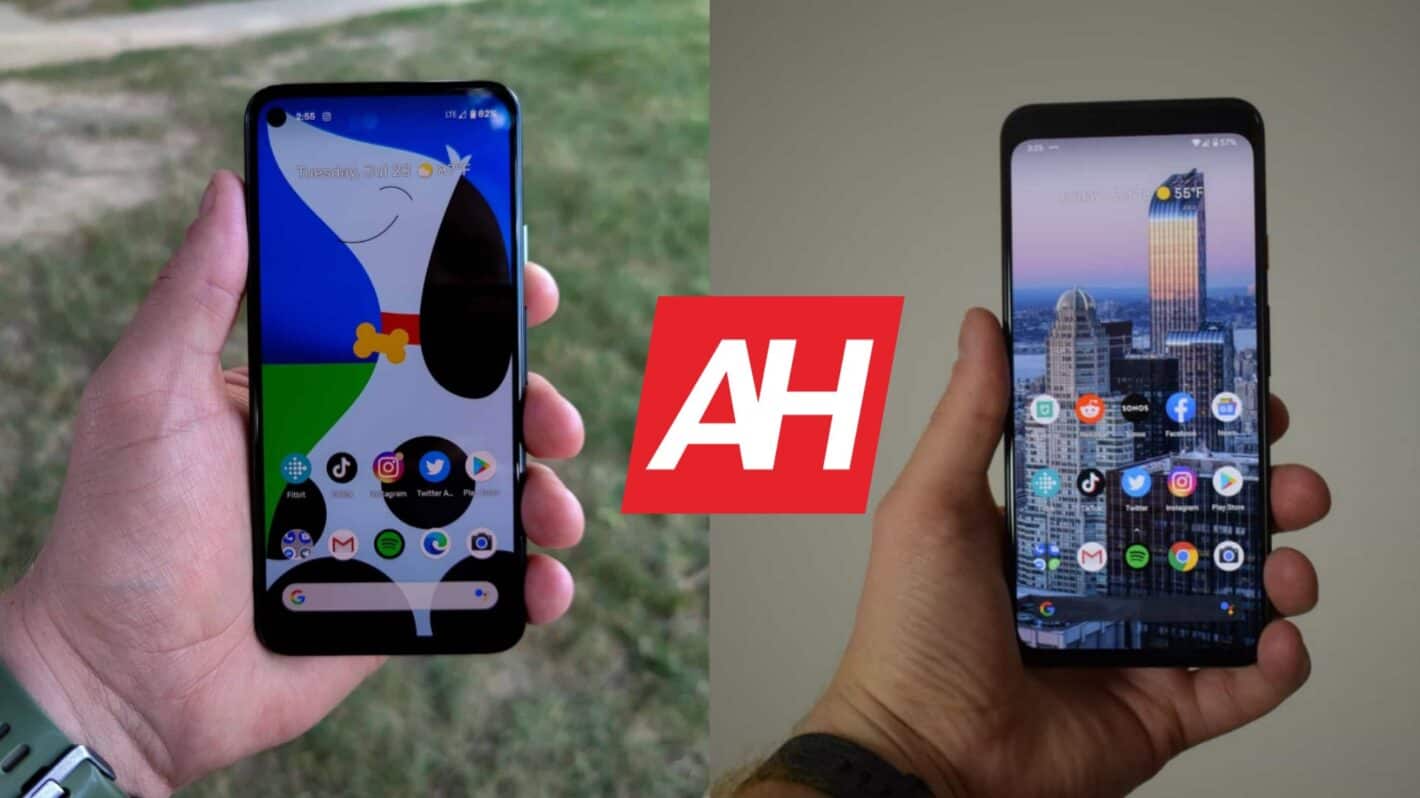 We’ve recently compared the Pixel 4a and the Pixel 4, and that comparison may surprise some of you. Well, let’s see if the Google Pixel 4a can hold its own against the Pixel 4 XL. As per usual, we’ll kick things off by listing the specs of the two phones, and go from there. We’ll compare them across a number of categories, including the design, display, performance, and so on.

These two phones do look somewhat similar from the back, but they’re quite different otherwise. Not only do they look different overall, but the build materials are also different. The Google Pixel 4a is made out of polycarbonate aka plastic. Its body is made out of a single piece of plastic, and the phone’s display. The Pixel 4 XL, on the other hand, combines metal and glass in its build.

The camera modules on the back are placed in the same spot, top-left corner. The Pixel 4 XL does include one more camera than the Pixel 4a, though. It has two, compared to a single camera on the Pixel 4a. The main sensor is the same on both phones, though, we’ll talk more about that in the camera section.

The Pixel 4a also includes an audio jack, which is something you won’t find on its sibling. Both phones are really well made, even though the Pixel 4 XL does seem more premium. The Pixel 4a is lighter, though, and it still feels like a really well-built phone, not to mention it’s smaller, easier to use with one hand, and it’s also less slippery.

Both of these phones feature OLED displays, but they’re considerably different. The Google Pixel 4a comes with a 5.81-inch fullHD+ OLED panel. The Pixel 4 XL, on the other hand, sports a 6.3-inch QHD+ P-OLED display. The aspect ratio is a bit higher on the Pixel 4a. Both panels are flat, and both support HDR output. The Pixel 4a’s display is protected by Gorilla Glass 3, while the Pixel 4 XL’s by the Gorilla Glass 5.

That being said, the Google Pixel 4a’s display does not support a high refresh rate. It is limited to 60Hz, while the Pixel 4 XL’s goes up to 90Hz. The screen-to-body ratio is a bit higher on the Pixel 4a, but the difference is not that big, to be quite honest. Both of these displays are quite good, there’s no doubt. However, the Pixel 4 XL’s does have an edge due to its resolution and refresh rate.

Truth be said, you won’t notice the lack of additional resolution on the Pixel 4a, at all. That panel is extremely sharp, and the vast majority of users can’t even tell the difference. The refresh rate is something you’ll notice if you’ve tried high refresh rate displays in the past, if not, that will not bother you either. Both panels show vibrant colors, deep blacks, great viewing angles, and everything else you’d expect out of a good smartphone display.

Ah… the performance. It’s not exactly a secret that the Google Pixel 4 and 4 XL had performance issues when they launched. The two phones were plagued with rather odd issues, at least for some users. Well, Google managed to fix the vast majority of such issues in the updates following the launch, so both phones perform great now. The Pixel 4a is a great performer as well, though.

The Google Pixel 4a is likely to start stuttering sooner than the Pixel 4 XL, though. Simply because its SoC is not the latest, nor the most powerful. Still, if you’re not planning to keep the phone for a lot of years, it should be good for a couple of them. The less powerful SoC should not deter you from getting the Pixel 4a, that’s for sure.

The Google Pixel 4 XL has a larger battery than the Pixel 4a, but it also has a more power-hungry SoC, higher display resolution, and higher refresh rate. What I’m trying to say is… don’t let the battery capacity fool you. Both phones offer decent battery life, but not something that will awe you.

Do note that your usage differs from ours, and you may get completely different results. You should be able to get around 5-6 hours of screen on time with both devices, though. With 90Hz refresh enabled on the Pixel 4 XL, by the way. If you’re gaming a lot, or run any other sort of power-intensive tasks often, the battery will deplete quicker, of course.

Both smartphones do support fast charging, luckily. Both include 30W fast wired charging. The Pixel 4 XL also supports wireless charging, which is not available on the Pixel 4a. All in all, most people will be happy with the battery life here, that’s for sure. If you’re a power user, though, think twice.

The Google Pixel 4 XL has two cameras on the back, while the Pixel 4a is equipped with one. Realistically, you’ll be using the main one in the vast majority of use cases. The main camera is the same on these two phones, and even though the Pixel 4a doesn’t have the Pixel Visual Core, the photos this camera takes are almost the same as the ones on the Pixel 4 XL. Pretty much every shot we take was difficult to differentiate from the one on the Pixel 4 XL.

The secondary camera on the Pixel 4 XL is a telephoto unit, not an ultrawide camera. Therefore, chances are you’ll use it far less than you think. So, in general, the Pixel 4 XL does give you more options thanks to that telephoto camera, but if you’re not planning to use it often, the Pixel 4a is more than good enough. Even the phone’s digital zoom is really good thanks to Google’s processing. Both phones excel in low light. Video recording is really good on both, with excellent stabilization.

In terms of audio, well, both phones are equipped with stereo speakers. What differentiates them, is the fact that the Pixel 4a offers a 3.5mm headphone jack, while the Pixel 4 XL does not. Let’s talk about the speakers first, though. These speakers are really good on both phones, but the Pixel 4a’s secondary one is a bit quieter than we’d prefer. The Pixel 4 XL seems to be doing a bit better in that regard. Both sets can get quite loud in general, though.

In terms of wired and wireless audio headphones and sound quality. Well, the output will be more or less the same from the two devices. Don’t expect something extraordinary, and you’ll be just fine. The audio output is well-balanced across the spectrum, and even though it may not suit audiophiles, everyone else will be happy with it, pretty much.