It seems like OnePlus is working on more mid-range phones. In addition to the Billie 1 and Billie 2 that got mentioned recently, the OnePlus ‘Clover’ smartphone just surfaced online as well.

The device got spotted on Geekbench, a benchmarking service. This listing clearly highlights that the OnePlus ‘Clover’ is a mid-range smartphone. 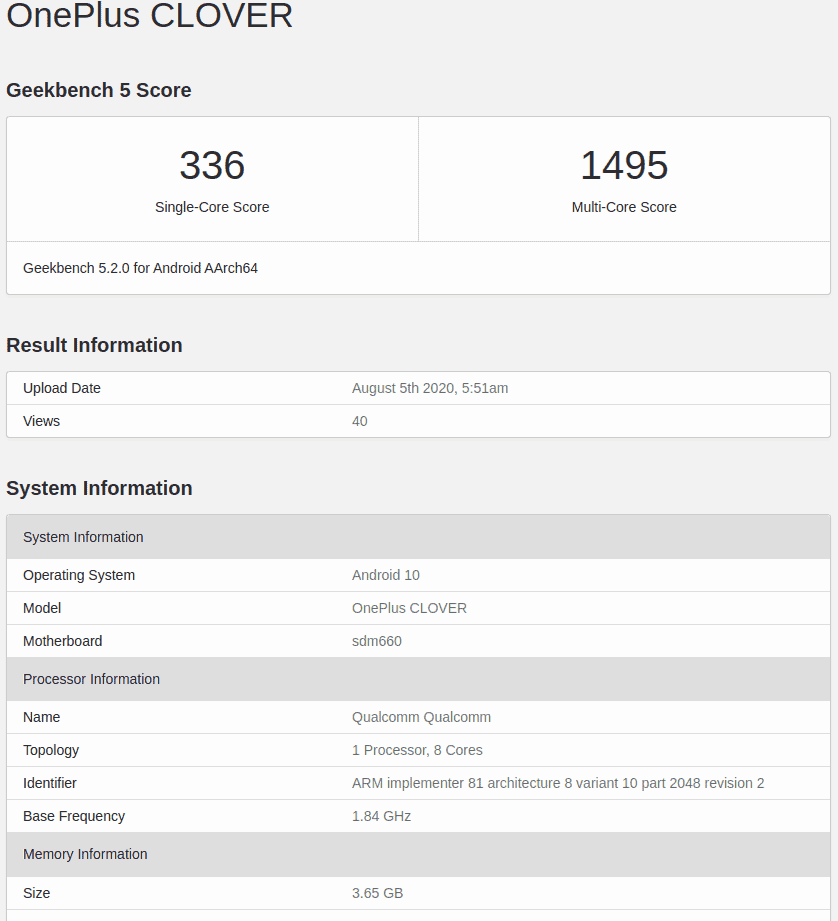 The OnePlus ‘Clover’ smartphone surprised everyone with its specs

The device is fueled by the Snapdragon 660 64-bit octa-core processor, it seems. That chip is inferior to the Snapdragon 765G which fuels the OnePlus Nord. It’s far from being the latest mid-range chip from the company.

What is even more surprising in this listing is the fact that this phone has only 4GB of RAM. Even mid-range phones these days have at least 6 or 8GB of RAM, usually 8GB.

This processor and RAM count are more suitable for a device a couple of years back, to be quite honest. That makes this listing quite confusing. OnePlus has a tendency to use really good specs even in its non-flagship offerings, and the ‘Nord’ is sheer proof of that.

Based on this phone’s specs, I’d say that it will cost under $300 even, maybe even under $250. That would be a killer price point for some regions out there, that’s for sure.

We’re not sure when will this phone launch, or if it will launch at all

We have no idea when this phone will launch, or if it will launch at all. This is the first mention of the device that we’ve seen, so it’s all a mystery at this point.

As mentioned at the beginning of the article, the Billie 1 and Billie 2 devices did surface recently. Those two are also mid-range offerings from OnePlus, and they’re rumored to arrive to the US.

Those two devices are also rumored to cost less than the OnePlus Nord. A well-known concept creator even created those two smartphones under the ‘OnePlus Aurora‘ name, while being provided some input from a well-known tipster. Those concepts do not represent the final design, though.

It seems like OnePlus is going to manufacture quite a few mid-range phones moving forward. That is a bit surprising as we’ve expected one, or two mid-range OnePlus handsets a year, max.

Based on these benchmarks, OnePlus may surprise us. The OnePlus Nord was supposed to be the only mid-range OnePlus phone this year, but things may change in the coming months.