Vivo sub-brand iQOO has announced its newest flagship smartphones, the iQOO 5 and iQOO 5 Pro in China. The two devices, which are identical in terms of looks, offer a plethora of premium features at an affordable price.

Both the handsets come with 6.56-inch AMOLED punch-hole displays with a 120Hz refresh rate and Full HD+ (2376×1080 pixels) resolution. The devices offer a 240Hz touch response rate and a 92.6-percent screen-to-body ratio. The iQOO 5 Pro further comes with a 3D curved screen with extremely narrow side bezel measuring at 1.48mm. iQOO also promises 1,300nits of peak brightness and support for HDR10+ standard on both models.

The new smartphones are powered by the Qualcomm Snapdragon 865 processor paired with Snapdragon X55 5G modem for 5G wireless connectivity. The company has equipped the phones with up to 12GB of LPDDR5 RAM and up to 256GB of UFS 3.1 internal storage capacity.

The iQOO 5 Pro also gets the same primary camera but with OIS (Optical Image Stabilization). The 120-degree ultra-wide sensor carries over unchanged but iQOO has replaced portrait camera with an 8-megapixel periscope camera on the Pro model. It offers f/3.4 aperture, OIS, 5x optical zoom, and 60x digital zoom. The front-facing camera is a 16-megapixel sensor in both the models. 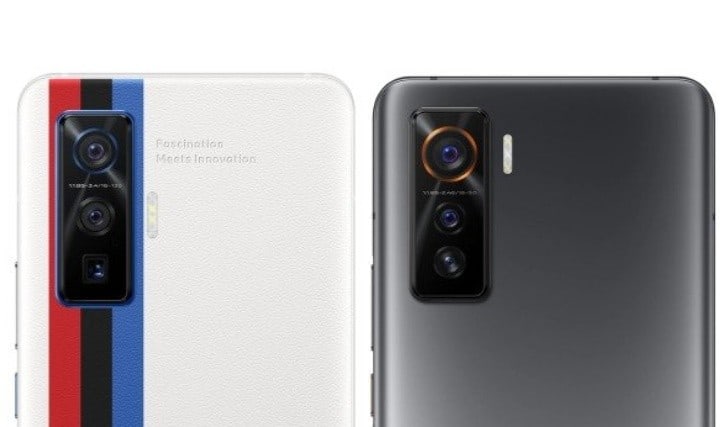 If it hadn't looked interesting yet, the battery department is where things get real. The iQOO 5 Pro supports the marquee 120W ultra-fast Flash Charge, which is only matched by the Xiaomi Mi 10 Ultra. The company promises the device to top up the 4,000 mAh battery from 0 to 100% in just 15 minutes. Five minutes of quick charging can replenish up to 50% of the battery juice.

This makes the vanilla iQOO 5's 55W charging speed look slow, although it's still much faster than the majority of current flagships have on offer. The device packs a 4,500 mAh battery which, according to iQOO, charges fully in about 50 minutes.

The company says an array of sensors and algorithms will monitor the battery temperature to prevent any damage. Additionally, iQOO is also offering VC liquid cooling system with thermal conductivity gel. This heat sink can cool down the CPU temperature by up to 12 degrees Celsius.

Here, the Track Version is the standard Pro model with a carbon fiber pattern with blue accents on the back. The Legendary Edition, on the other hand, features BMW M Motorsport flavors. It incorporates three stripes in white leather finish, commemorating the partnership between iQOO and BMW M Motorsport.

The new iQOO flagships are fairly affordable for what they offer

The iQOO 5 and iQOO 5 Pro will go on sale in China on August 24. The Chinese company has yet to announce the international availability of the new handsets.