Google Photos has been a solid offering for uploading and saving photos since its 2015 launch. And its Memories feature only made that better when it launched last year. As might be expected, Memories in Google Photos is a feature, driven by AI, that crops up photos from the user’s past.

The artificial intelligence utilizes machine learning to recognize not only places — for example a vacation spot or your home town. That would be easy enough to accomplish. It also recognizes specific objects or “things.” It can pick out when you take pictures at a zoo. Or at a park, museum, during a holiday, or of the sky, a campfire, flowers, or a specific animal.

Perhaps best of all, it can recognize when you’ve taken photos of a person and who that person is — allowing users to self-identify the person if it doesn’t quite catch them for sorting.

Memories, cycling back around, takes advantage of that to surface images that the AI thinks users will want to see. It typically displays those at the top on the main page, based on dates. So it will surface photos from a given week from previous years, allowing users to relive those memories. But it should probably go without saying that’s not always a good thing.

Now, it’s also possible for the Google Photos Memories feature to surface content users wouldn’t want to see. Or, at the very least, wouldn’t want to be reminded of as frequently as the feature tends to update. And there are a wealth of reasons why that might be the case.

A user may hope to avoid seeing pictures of a pet, relative, or friend. For example, if they’re deceased and the death was recent and still too fresh or if they’ve simply fallen out. Or, conversely, they may want to avoid seeing pictures of their now-ex-significant other. For instance, if that person happens to be in a lot of photos of other individuals, pets, or memories that are worth holding onto.

A co-worker or former coworker might crop up in photos for similar reasons. Or the system might associate individuals with a capture that the user shot of their food. Which only just happened to catch a friend, family member, pet, or something else in the background.

The reasons a person might not want to see certain memories surfaced are going to vary quite a lot from person to person. And the reasons for not wanting to just delete the photos outright will stretch across just as many reasons.

Of course, a person might also just want to manage what’s surfacing for reasons entirely unrelated.

Fortunately, the process of adjusting how and what the Google Photos Memory feature surfaces are far less complicated. In fact, it’s going to be outright easy to accomplish with some exploration of the UI. Here, we’ll step through the different ways Google Photos Memories can be managed. Including notification management, in case anybody just wants to stop those but not everything else.

Here’s how to adjust what Google Photos Memories show

Google Photos only shows Memories on the mobile platform. So it goes without saying this is a feature that can only be adjusted in the Google-built app.

For those who use browser apps or desktop to access Google Photos, it doesn’t appear on those. And it also can’t be adjusted in those. So users will need to navigate to the mobile app to get started. And they’ll need to start by downloading the app if they don’t already have it.

Once the app is installed, each of the features we’ll be discussing here starts with the same basic process; 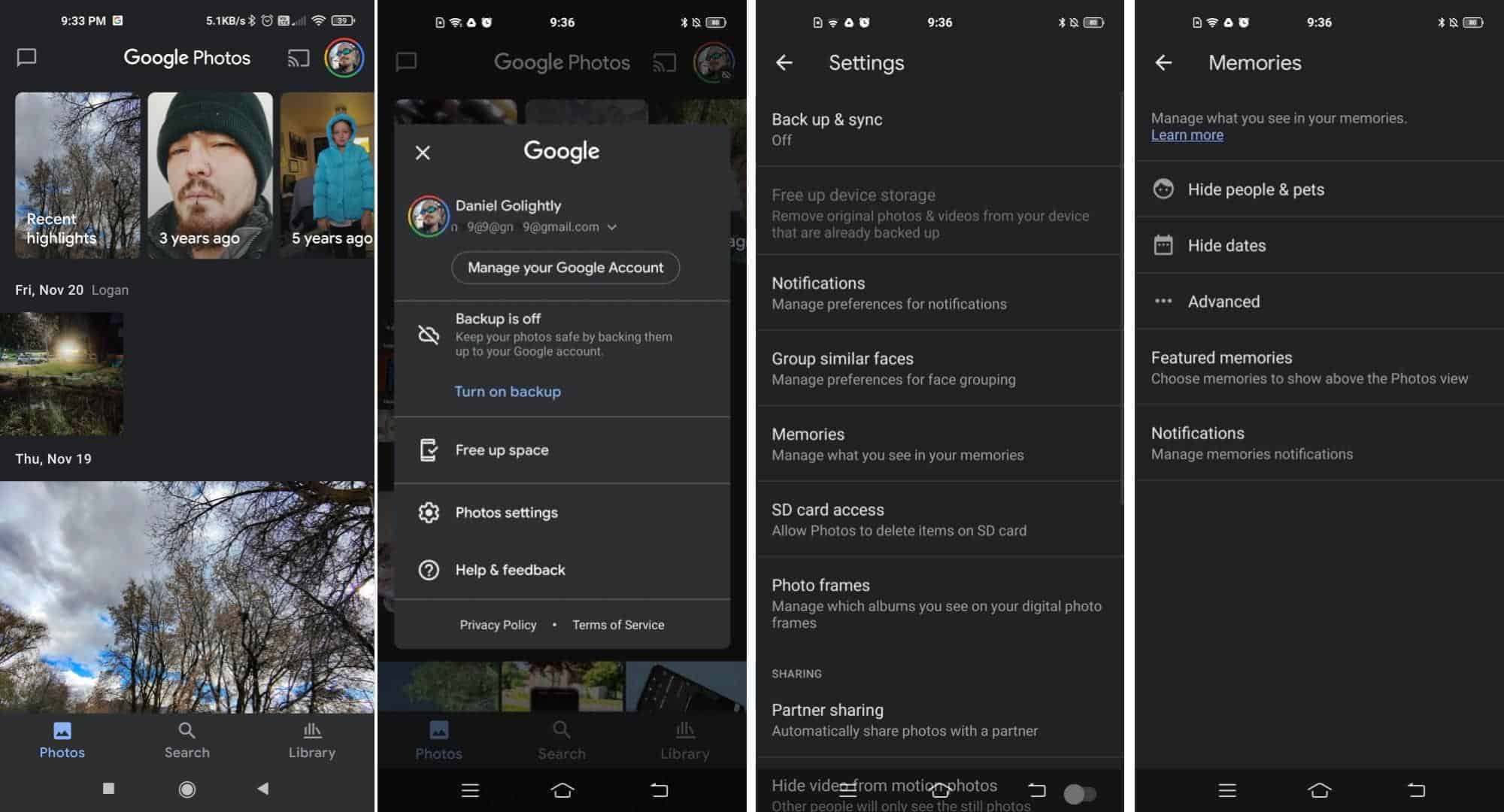 Which memories do you want to feature, if any, to begin with?

Now, the first option for those who don’t want to have Memories surface in Google Photos is going to be to simply turn that off. And users can do that individually or entirely by navigating to the “Featured Memories” segment of the above-mentioned Memories menu.

There are three options and each is self-explanatory, with its own toggles for turning the features on or off. All of the toggles are “on” by default.

First is “Previous years” and that shows photos from the current week, years ago.  That’s followed by “Recent highlights,” showcasing images saved over the past few weeks. Last, “Themed memories” are also toggleable. Those show photos about specific people, places, or things, as defined in the “Search” tab of the app. 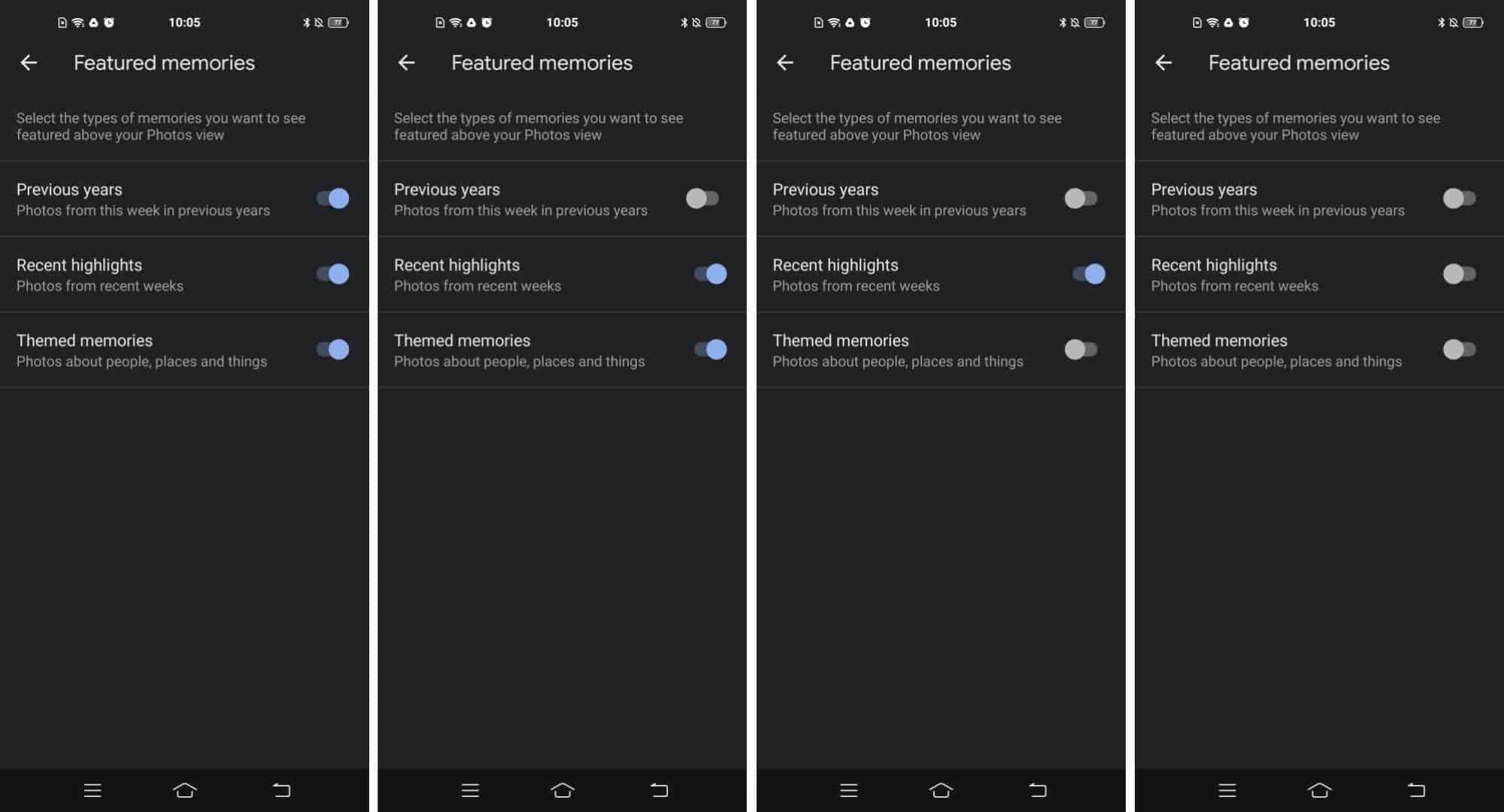 Of course, users can also engage in more granular control over how memories are presented. And that includes controlling whether specifically-identified people or pets show up in Memories. 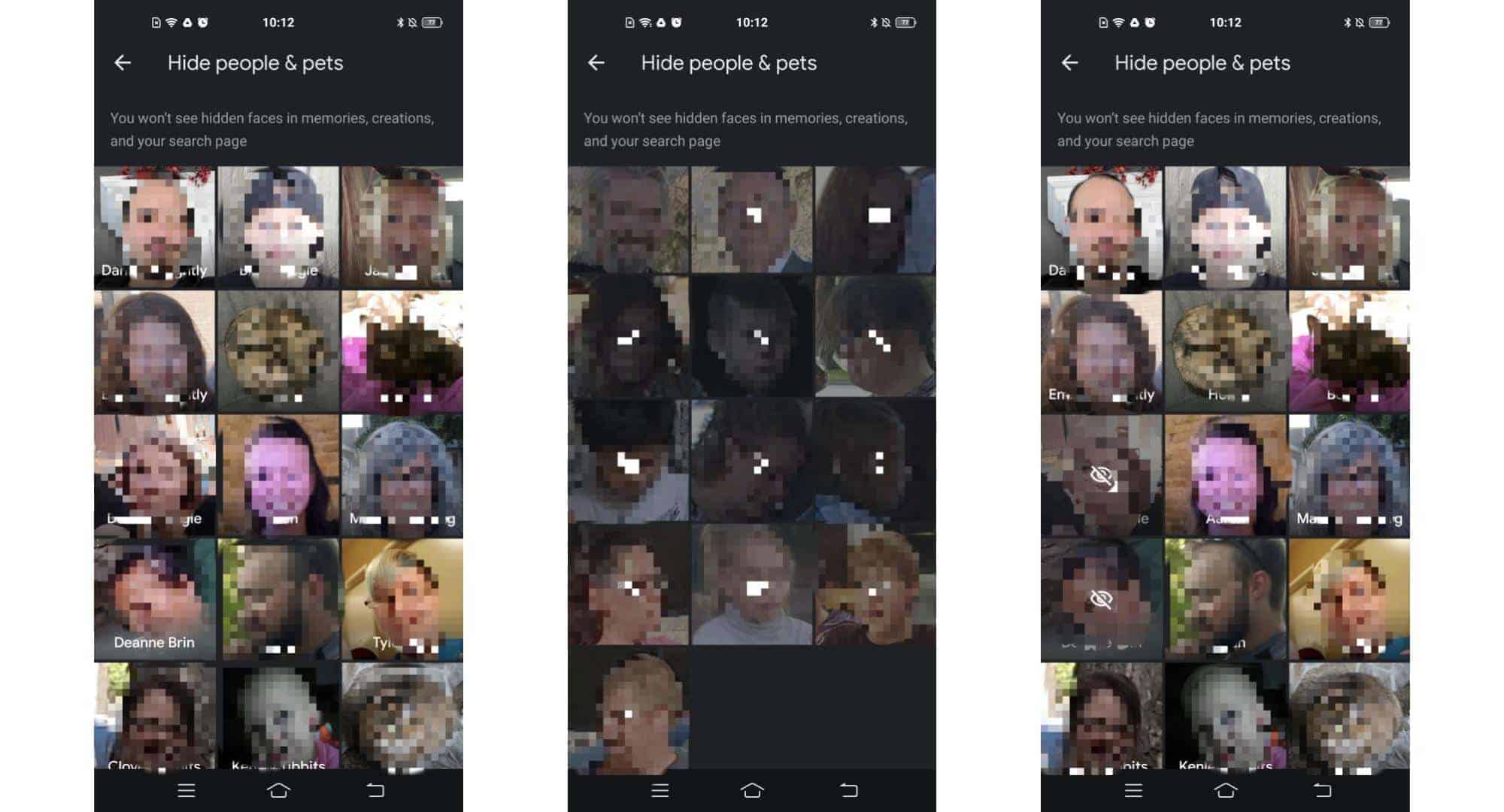 To hide specific dates is a similar process to hiding specific people or pets. But it’s not exactly the same due to the fact that it’s a more precise filtering mechanism. The reasons a user might choose to hide specific dates are going to be even more widely varied. But the process will be the same regardless. 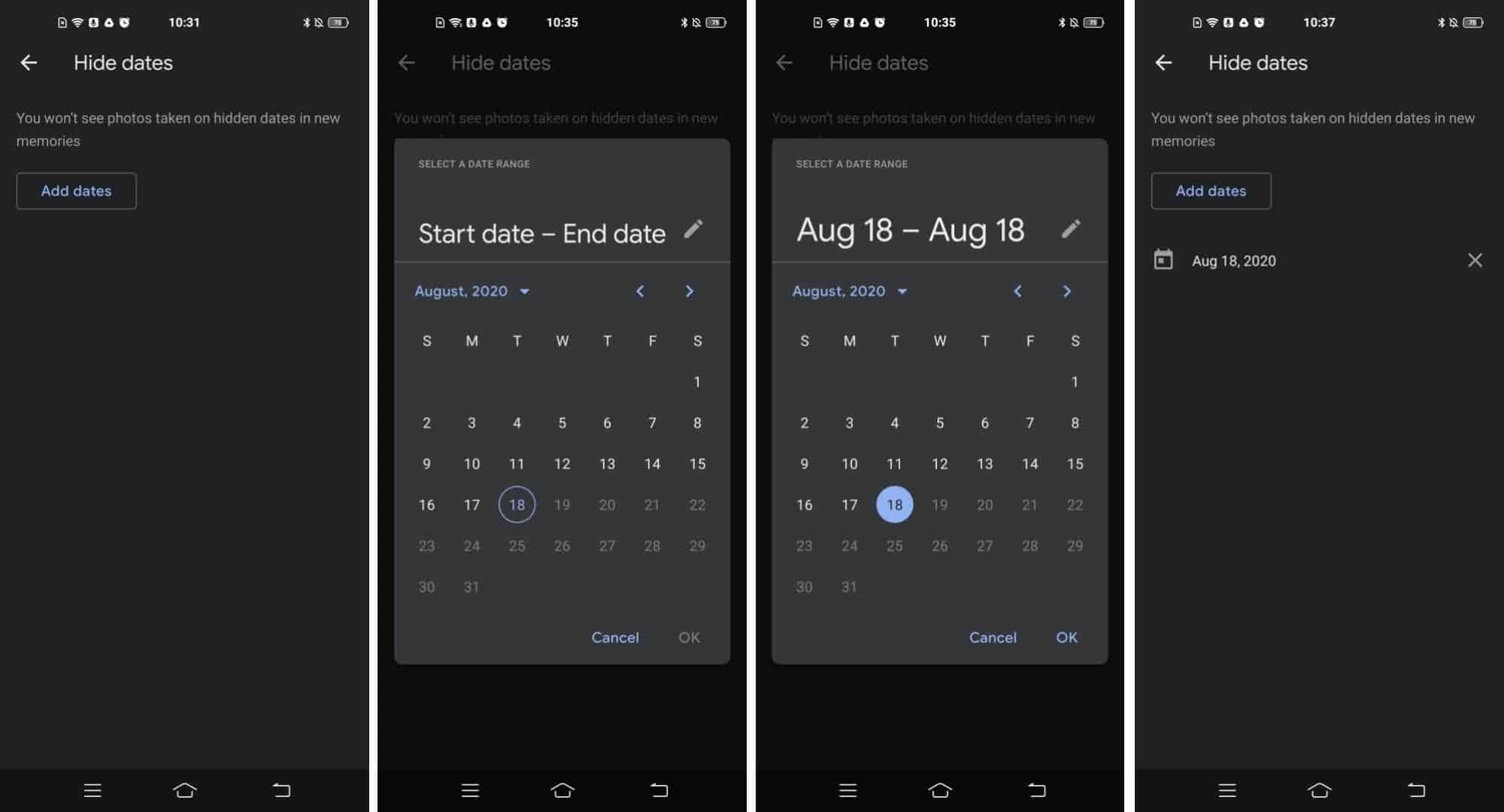 To let the AI create things to showcase …or not

Last but not least, Google Photos also allows users to stop AI-created content from appearing in the feed. That includes Collages, Animations, Color Pop photos, and Stylized photos. Google Assistant, as it’s been built into Photos, creates those on a fairly regular basis. While they can be stunning and fun, they aren’t always. But the feature can actually be controlled and it’s not just an on/off thing either. 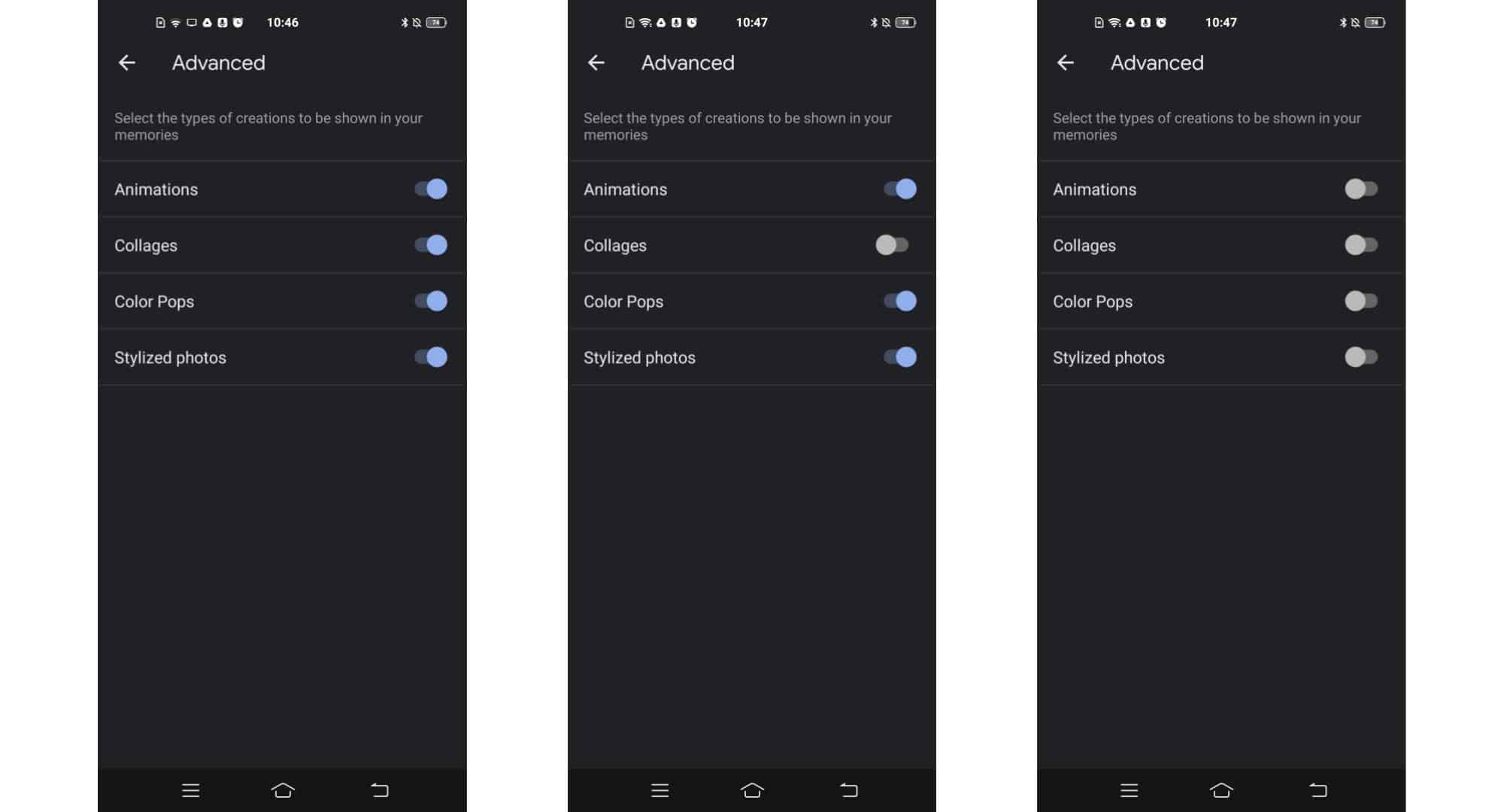 Now, sometimes Google throws out the Photos Memories feature as a notification. And, that can, arguably, be even worse since not everybody wants to see some of the memories it surfaces. Let alone when those memories are being thrown out in an apparently random fashion.

Conversely, turning off notifications to the entire app seems a bit drastic. A bit like throwing out the baby with the bathwater. Google Photos notifications can be useful. For example, where shared albums are concerned and when those are auto-populated using AI, the app sends a notification to inform users that a new photo has been added.

Otherwise, they’d be stuck navigating to the shared photo feed by chance. And potentially miss some great photos for an extended period of time.

Since turning off all of the notifications at the Android level isn’t really a viable solution, then, it’s a good thing that Google Photos allows granular control over notifications specifically from Memories.

To find those is as straightforward as anything else here. 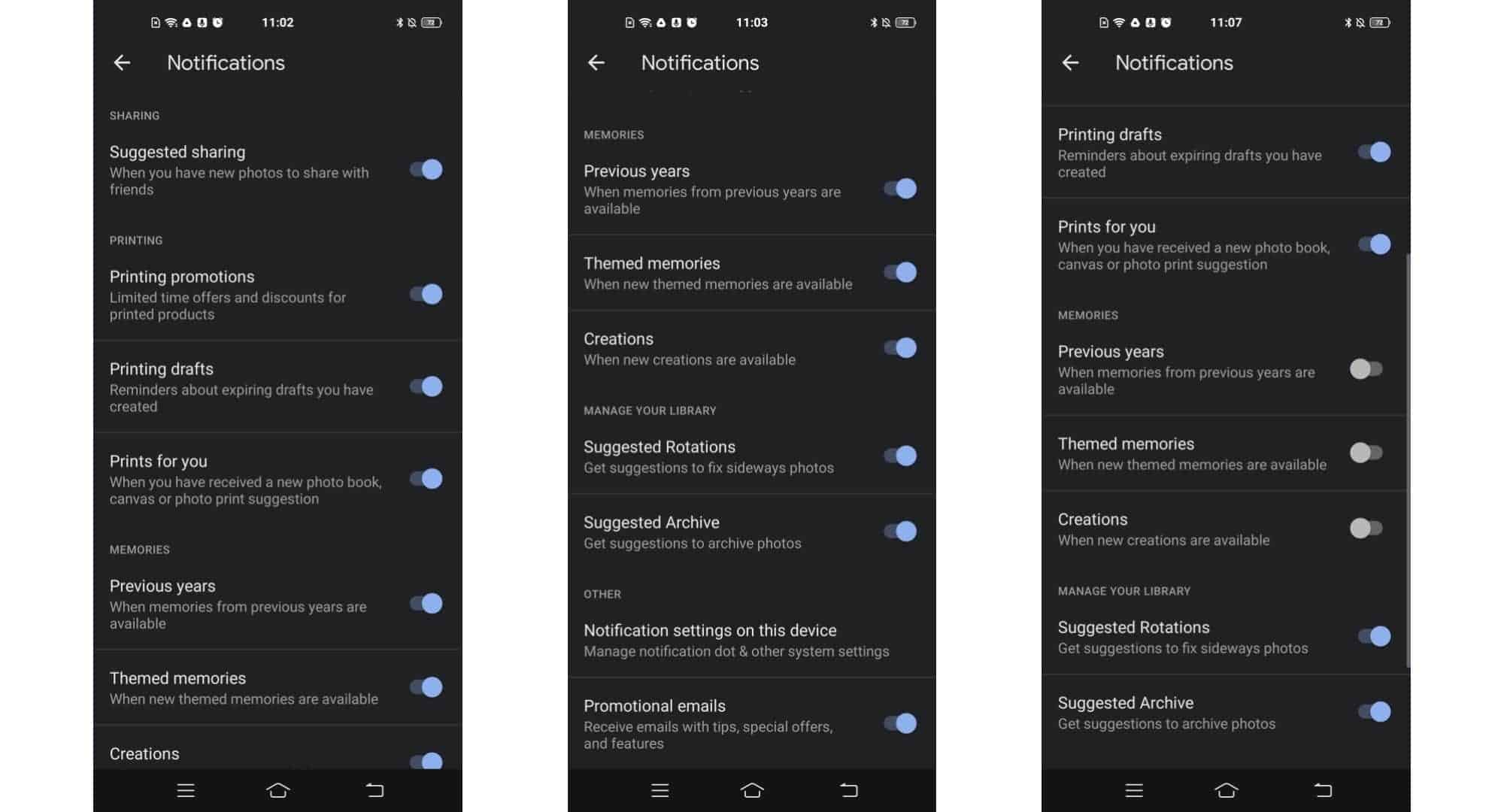