The global smartphone market is bound to return to growth in 2021, IDC researchers report. Naturally, that’s a highly encouraging forecast given this year’s developments. Not to mention the highly saturated state of the industry. The latter is arguably why mobile devices were so vulnerable to the economic impact of government-mandated shutdowns in the first place. In effect, instead of returning to growth, the market continued to decline throughout this year.

The silver lining is that smartphones are so ingrained in our everyday lives that even stagnation yields billions in revenue. Meaning even three straight years of decline barely had an impact on the overall mobile economy. The 2017 heights reached 1.55 billion smartphone shipments and a return to that level isn’t just attainable but expected over the next four years. By 2024, IDC projects

Despite the positive medium-term outlook, mobile companies should brace themselves in the coming months. Because IDC reports things are going to get worse until they get better. About 120 million shipments worse, to be more specific. That’s approximately by how much the mobile market is going to shrink this year, as per the same forecast. The chart below illustrates this prediction in more detail. Additionally, it reveals the driving force behind IDC’s relative optimism – 5G. Or, better said: 5G-enabled consumer electronics.

Today’s forecast marks a significant shift in IDC’s overall outlook concerning 5G smartphone adoption. It was just 18 months ago that the analytics firm projected 5G adoption will reach only a quarter of the global market come 2023. Today its optimism is about twice as strong. The change is especially notable since IDC barely revised its overall shipment estimate. That figure dropped from roughly 1.5 billion to 1.4 billion units. Yet the market research firm now believes about half of those will be 5G-ready.

Beyond the next generation of wireless, emerging markets are another factor inviting mobile market optimism. IDC concludes that the global smartphone market should record a 9% growth in 2021. Then again, if this year taught us anything, it’s that unforseen circumstances can get very global, very fast. And a higher-than-anticipated 5G smartphone volume doesn’t necessarily guarantee good news for device manufacturers. After all, IDC’s newest report concerns shipments, not sales, though the latter – or expectations thereof – obviously inform the former. 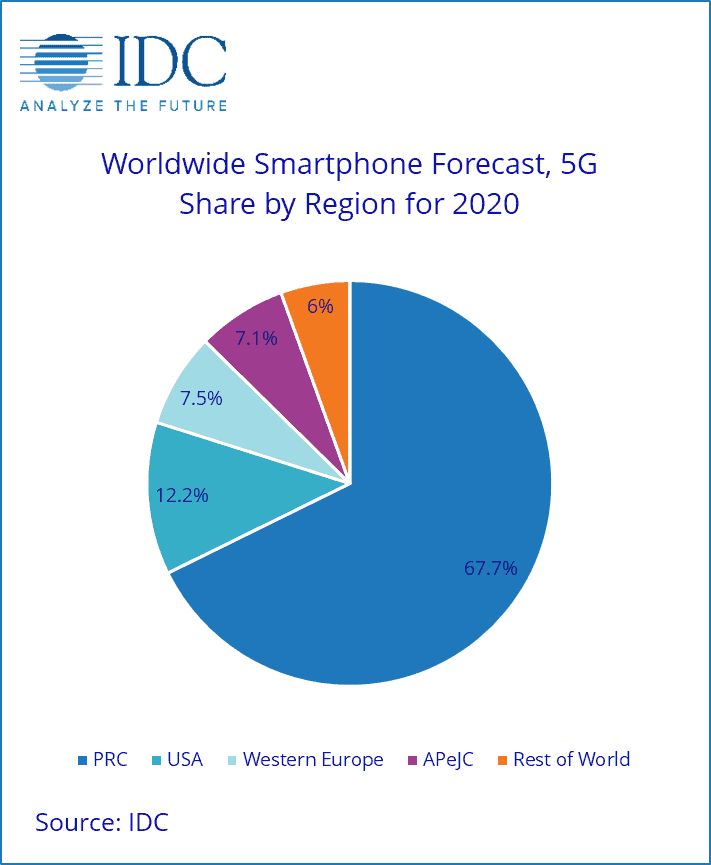 So, once all the manufacturing dust has settled in 2021, someone will actually have to go buy all those devices. For now, the main thing this report reveals is that Qualcomm’s ability patent-troll manufacturers into 5G smartphone contracts was higher than anticipated. Not that fast adoption of wireless tech is bad, of course. It’s just that global infrastructural deployments haven’t been keeping up pace with smartphones.