In the tweet, Wong also included some screenshots of this new Spotify Virtual Events feature. Notably, it shows up on the Spotify profile page which lists down all the upcoming events under the ‘Upcoming Virtual Events’ section.

The coronavirus pandemic has hit some industries very hard. And the live music concerts seem out of the picture, at least in the foreseeable future until we have a vaccine.

Major tech giants have moved their programs to a  virtual space. And the latest company to join this list is Spotify. The music industry, especially the artists, rely on live music concerts and shows for their extra income.

However, the pandemic has put live music concerts on the back burner. As concerts gather a large crowd, which is against the health and safety of the audience.

But Spotify is now developing their answer to live concerts via their Virtual Events feature. Speculation is that it won’t be hard for Spotify to implement this change as it has a huge user base.

In fact, Spotify is one step ahead when it comes to making virtual music events a reality. It’s already in talks with ticketing partners like Ticketmaster, Songkick, Resident Advisor, Eventbrite, AXS, and eplus in Japan.

Moreover, these partners have also embraced the virtual live music events now that more people are staying at home. Basically, it will help them keep their businesses afloat during the time of no business because of COVID-19.

The tweet shows a list of upcoming events under the “Upcoming Virtual Events” section. Here a BTS virtual event can be seen scheduled for September 19. Notably, this event is the 2020 iHeartRadio Music Festival, where BTS is scheduled to perform.

Besides, with its user base, Spotify needs a little tweak to its policy to implement a virtual events feature.

Note that this feature is still under development and is not available for the public. One thing still remains clear whether Spotify will implement this Virtual Events section permanently or on a temporary basis.

Although the Spotify Virtual Events feature could give the music artists an additional place to earn revenue, it is no replacement for live concerts. There is no official word from Spotify on this feature. 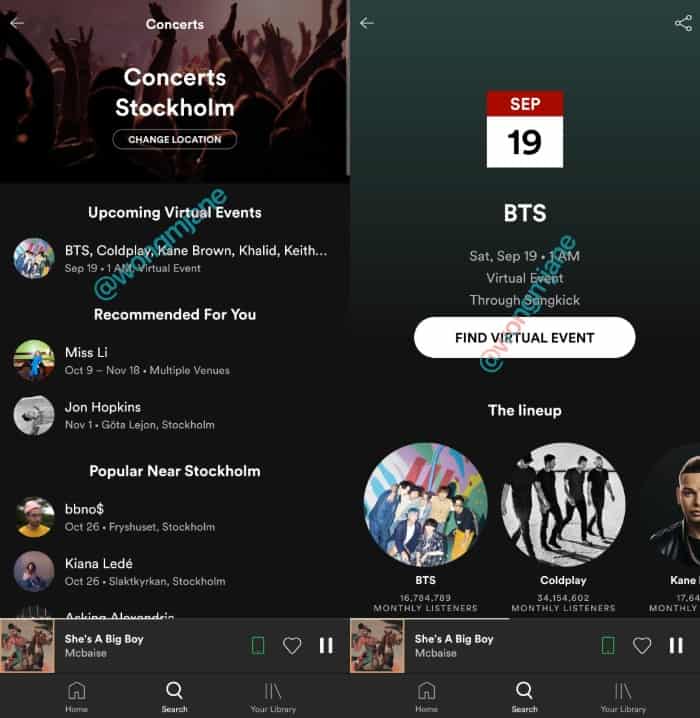