The COVID-19 pandemic has, unsurprisingly, seriously hurt smartphone sales in the US. According to new data from global market research firm Counterpoint Research, US smartphone sales declined 25% year-over-year (YoY) in Q2 2020.

Samsung was the least affected vendor with a 10-percent drop in sales volume. Alcatel, the TCL-run brand, saw a YoY decline of 11-percent. Apple, the largest smartphone vendor in the US, also saw its sales volume drop by 23-percent in the second quarter this year.

The Cupertino still remains the largest vendor in the world’s most valuable smartphone market. However, arch-rival Samsung has managed to close the gap significantly in recent months. Counterpoint Research estimates the South Korean company to be holding 37-percent of the market against Apple’s 38-percent share in the first quarter of 2020.

LG sales were down 35-percent in Q2 2020, while OnePlus saw a whopping 60-percent drop. Motorola and ZTE saw an even bigger decline in smartphone sales volumes, down 62-percent and 68-percent, respectively.

While LG, Motorola, and ZTE drops aren’t surprising as they hardly attract buyers even in normal market conditions, OnePlus wasn’t expected to fare that bad. The Chinese company launched the OnePlus 8 series early in Q2 2020. The new OnePlus 8 and OnePlus 8 Pro are available through Verizon and T-Mobile in the US.

Apple, meanwhile, launched the iPhone SE around the same time and attracted a good number of buyers. In fact, the new affordable iPhone may have captured some of the potential OnePlus 8 buyers as well. Counterpoint Research says more than 26-percent of iPhone SE buyers came from Android devices. The numbers are significantly “higher than normal Android to iOS switching.”

Online sales grew as the US smartphone market returns to shape

Samsung’s Galaxy S20 series arrived in the market just when stores began to close due to nationwide lockdown measures against the pandemic. This led to poor sales of the new Galaxy flagships. About 38-percent fewer Galaxy S20 phones were activated in the first four months since launch, compared to the Galaxy S10 activations last year.

The iPhone SE also saw good online demand in Q2 2020. Overall, the share of online smartphone sales in the US grew to 31-percent from 14-percent last year. This trend is likely to continue in Q3 as well.

According to the research firm, smartphone sales grew week-over-week in May and June. In fact, June 2020 sales were stronger than June 2019 sales. This is a sign that smartphone demand is growing in the market following a few months of sluggish demand. Stimulus checks and store reopening also helped.

However, the recent surge in COVID-19 cases has forced closure once again in several states. It remains to be seen how this second wave of the virus affects smartphone sales in the third quarter. 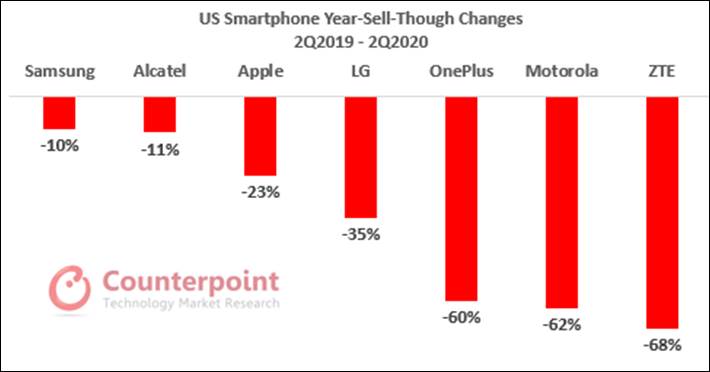