T-Mobile promised that when it merged with Sprint, it would not raise prices. It also promised some new plans coming this week, and well, they delivered on that as well. Today, T-Mobile announced that a family of four can get four lines for just $100 per month. That works out to around $25 per line.

This 4/$25 offer that T-Mobile is doing, does also include 5G access, so you’re not paying extra to access its nationwide 5G network. Though, the taxes and fees are not included here.

And to sweeten the deal, you can get a 5G smartphone for just $5 per month (and per phone). So for $30 per month, you’ve got a new smartphone and a 5G plan. The phone that T-Mobile is talking about that’s $5 per line, is the new Samsung Galaxy A71 5G. It’s a mid-range 5G smartphone, that is actually really good.

This is the T-Mobile Essentials plan, but cheaper

This is basically the T-Mobile Essentials plan, but now it’s a bit cheaper. Coming in at $25 per line, per month. Which makes it a whole lot cheaper than the competition. As T-Mobile’s CEO Mike Sievert said in his YouTube video today announcing this, you’d save over a thousand bucks a year by switching to T-Mobile instead of sticking with Verizon and AT&T.

You can sign up for this new plan at T-Mobile starting this Friday, July 24. By calling T-Mobile, going to their website or visiting your local T-Mobile store. 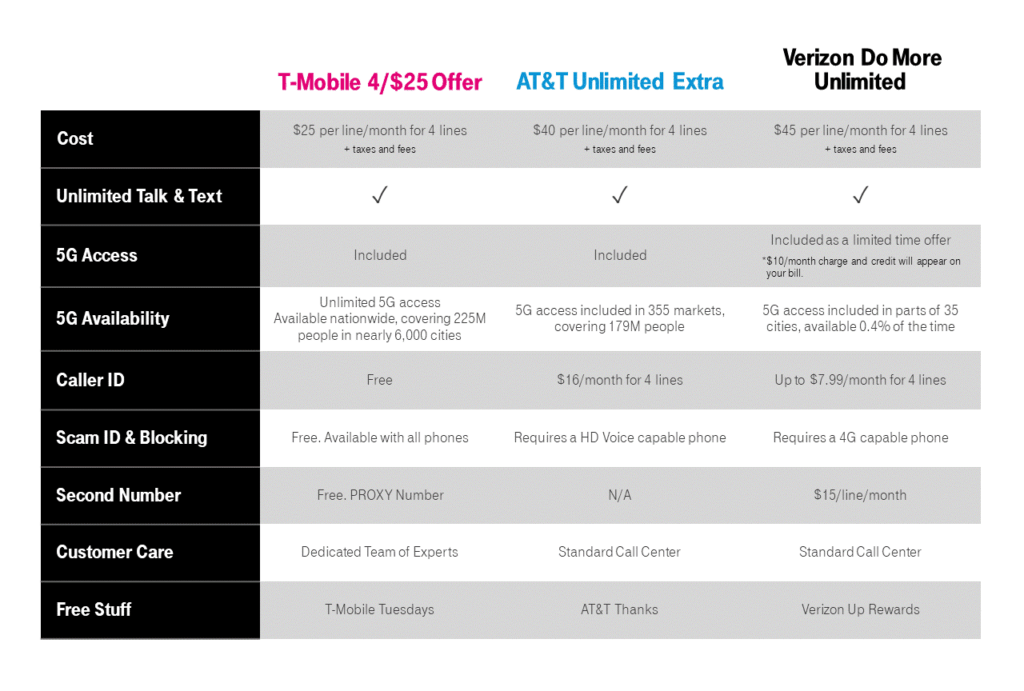 Even though T-Mobile is giving Verizon a lot of crap for their network not being widely available, T-Mobile’s 5G network hasn’t been that fast. For most people, it’s been a little bit faster than LTE. And it’s because it’s building it out opposite of Verizon. Sub-6 then mmWave, while Verizon is doing mmWave and then Sub-6.

But T-Mobile is still working on its 5G network, and its 5G cake. Which includes the low-band 600MHz spectrum (that’s where the “nationwide” 5G came from) and then the mid-band 2.5GHz network it got from Sprint, and mmWave. That full cake is only available in a couple of markets now, but it has reached 1Gbps speeds int hose markets.

T-Mobile has deployed Sprint’s 2.5GHz spectrum in some cities like Chicago, Houston, Los Angeles, Philadelphia and New York City. And there will be more cities coming online very soon. Those were Sprint’s first 5G cities, which is why they were deployed so quickly.