The uber-popular game has generated around $1.3 billion in revenues in the first six months of this year alone. It collected a record $270 million in the month of March 2020, when people around the world were mostly staying home because of the government-imposed lockdown in response to the COVID-19 pandemic.

Although the player spending on the game has dropped significantly since, PUBG Mobile was still the highest-grossing multiplayer battle royale game for the first half of the year, and by a big margin.

Its total revenue of $1.3 billion between January to June 2020 was more than four times greater than the next highest-grossing title Garena Free Fire. The latter has accumulated around $300 million in revenues so far this year.

Knives Out from NetEase has generated over $260 million to date in 2020, the latest Sensor Tower data estimates show. Activision’s Call of Duty: Mobile (COD Mobile), meanwhile, has collected over $220 million in the first half of the year. The mobile version of this popular first-person shooter game is developed by TiMi Studios, a subsidiary of Tencent Games.

Although PUBG Mobile was initially launched in China, Tencent Games failed to get a commercial license for it from the Chinese government.

This meant the company was unable to generate revenue from the game. It replaced PUBG Mobile with a similar-themed Game For Peace in China last year, allowing the former’s players to migrate their accounts and equipment to the new game.

Game For Peace has been a wild success in China since, generating the majority of revenue for the title.

The Chinese version of the game has generated $1.6 billion in lifetime player spending. That’s about 52 percent of the global $3 billion payer spending on PUBG Mobile. The US comes second with about 14 percent of revenue, while Japan rounds out the top three with 5.6 percent.

Platform-wise, Apple’s App Store makes up the lion’s share of the revenue, collecting about 79 percent of the total spending. Google Play accounts for the remaining 21 percent of PUBG Mobile’s lifetime revenue. Sensor Tower’s data estimates do not include revenue from third-party Android stores.

In terms of download, PUBG Mobile and its Chinese variant have accumulated a combined 734 million downloads globally so far. Google Play accounts for 65 percent of the total installs, while the App Store accounts for the remaining 35 percent.

Market-wise, India leads the chart with 175 million downloads across the two platforms. That makes up about 24 percent of the total installs globally. China ranks No. 2 with 16.7 percent of all downloads, followed by the US with 6.4 percent. 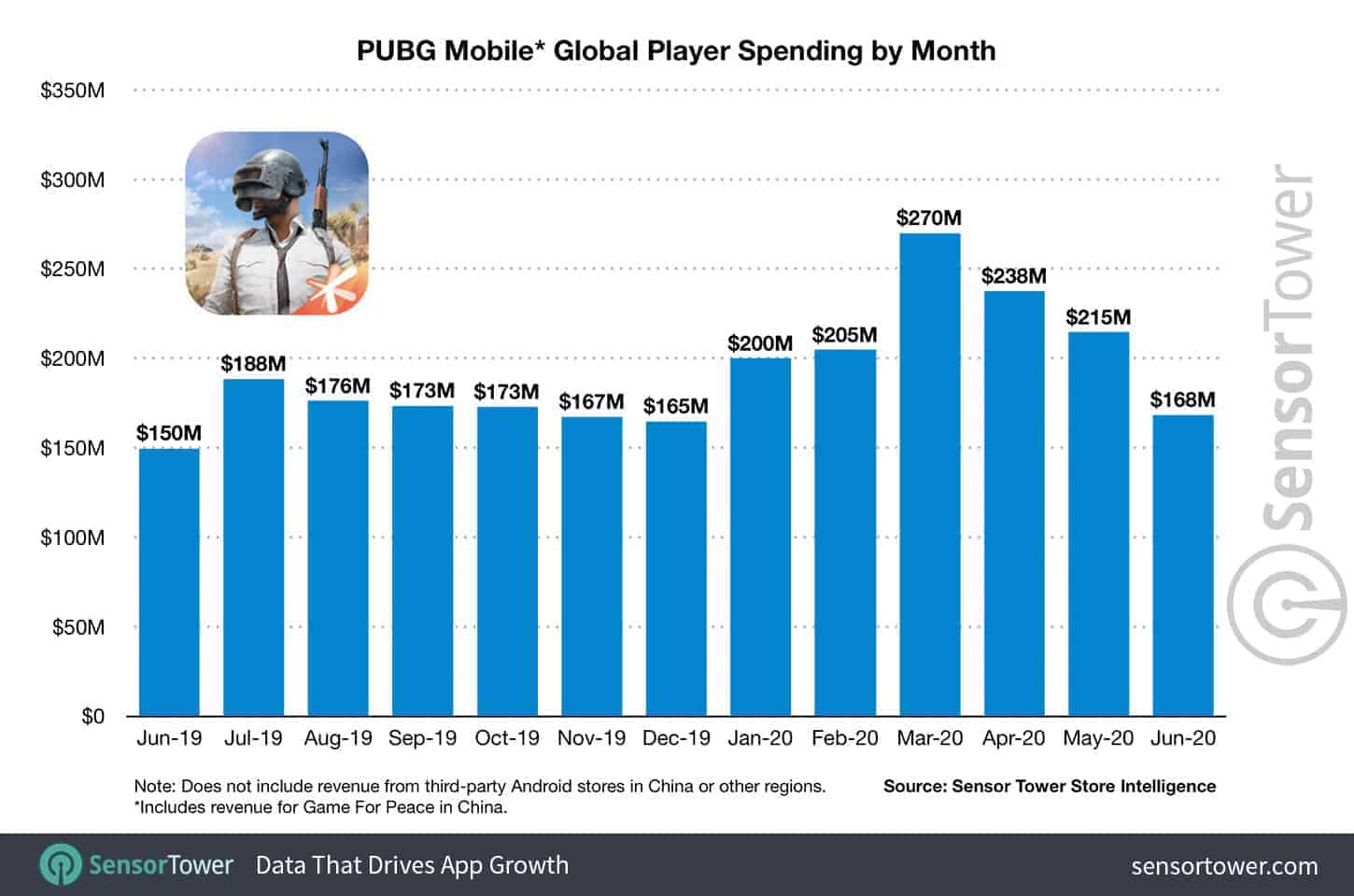