The upcoming ‘Razr’ smartphone from Motorola will support 5G connectivity, and offer better cameras, it seems. This information comes from Evan Blass, a well-known tipster.

He shared the information via Twitter, along with some additional tidbits about the phone. He mentioned that the device’s codename is ‘Motorola Odyssey’.

This specific variant he shared information for comes in a Mercury Silver color option. The device includes 256GB of internal storage, and does include a nano SIM, along with an eSIM.

The phone’s main display will measure 6.2 inches, the same as the one on the Motorola Razr 2019. Android 10 will come pre-installed on the phone, by the way, and the device will not be waterproof.

The new Motorola Razr will not only offer 5G, but beter cameras as well

It will have two cameras on the back. Those two cameras will usher in improvements compared to the previous model. The Motorola Razr 5G is expected to include 48 and 20-megapixel cameras.

The Motorola Razr 2019, for comparison’s sake, sports a 16-megapixel main camera, and a ToF 3D camera. It also includes a 5-megapixel selfie camera, though you can take selfies with its rear-facing cameras as well… thanks to that small display on the front.

The Motorola Razr 5G may include a similar setup, in fact. It may ship with a front-facing camera as well. That camera has not been mentioned by Evan Blass.

This smartphone is rumored to launch in September, though we’ve heard a lot of conflicting information. One rumor even suggested that the device may not launch this year. So, we’ll have to wait and see.

The phone is rumored to ship with the Snapdragon 765G 64-bit octa-core processor. That is the same processor that OnePlus will use in its upcoming ‘Nord’ smartphone.

This handset is also rumored to sport a 2,845mAh battery. The Motorola Razr 2019 sports a 2,510mAh unit, so this would be an improvement of sorts… and a much-needed one.

We still do not know how much will this phone cost, though. The Motorola Razr 2019 launched with a price tag of $1,500. Such pricing was criticized due to the phone’s dated specs, and problems that occur after the launch.

Motorola will hopefully fix all such issues with the sequel, while offering more modern specs. We do hope that its pricing will remain the same, at the very least, though it would be nice to see an even lower price tag. 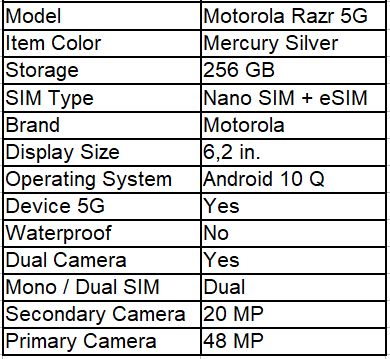