Motorola has been launching new smartphones left, right, and center and it isn’t stopping anytime soon. The Moto E7, which was last spotted on the Google Play Console database in May, could be the next to come. Live images of the unannounced Motorola smartphone have surfaced on the internet along with a hands-on video.

The recent leak shows the Moto E7 in full its glory and confirms some of its rumored specs. The handset will run on the Qualcomm Snapdragon 632 processor with 2GB of RAM and 32GB internal storage.

Motorola will reportedly also offer this budget phone in a 4GB RAM version with 64GB of storage, possibly calling it Moto E7 Plus. A 3,550mAh battery fuels this phone.

There’s a waterdrop notch at the center housing the front-facing camera, which is said to be a 5-megapixel sensor.

The handset packs a dual-camera setup at the back, featuring a 13-megapixel primary camera and an additional 2-megapixel sensor.

Interestingly, Motorola has placed the two rear cameras separately, much like on the Moto G8 Power Lite, with one less sensor, of course. One of the camera housing also includes an LED flash. The Motorola batwing logo at the back also incorporates a capacitive fingerprint sensor.

Although the source claims the back is glass, it’s highly unlikely for such a budget phone. Instead, it could be “glastic,” the glass-looking plastic material that Samsung uses in its mid-range Galaxy smartphones. 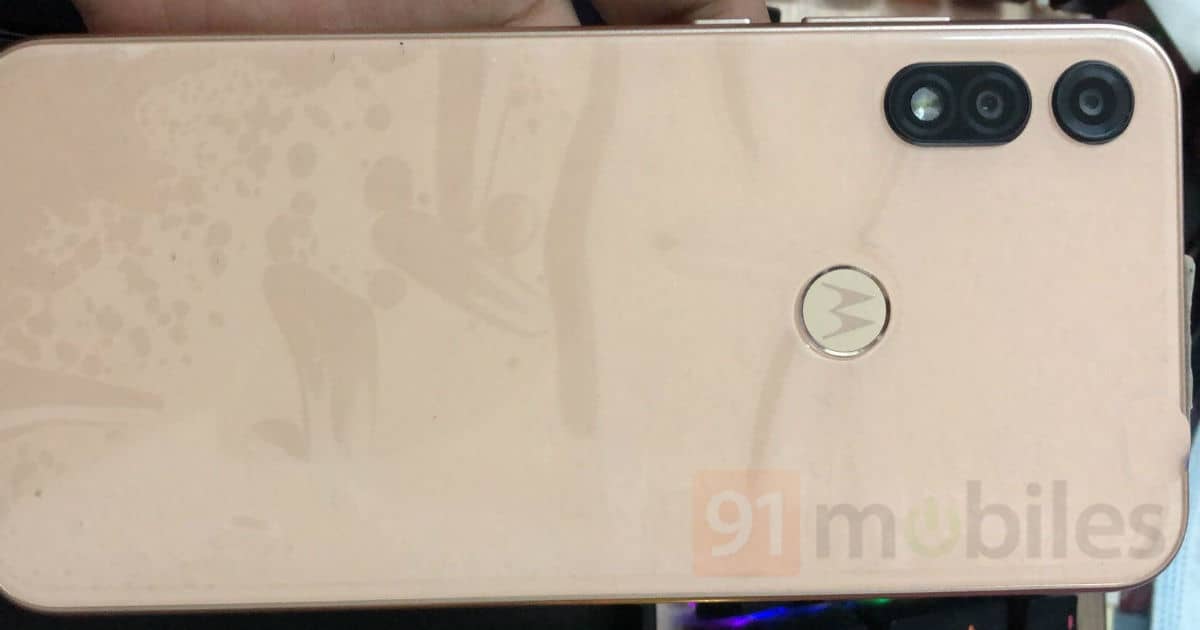 The Moto E7 appears to be a significant upgrade from the Moto E6. As you can see in the live images below, Motorola has greatly reduced the top and bezels on the Moto E7.

While the side bezels look equally thick, they are still decent for an entry-level device.

Motorola is also offering more storage in the base variant, bigger display, bigger battery, dual rear cameras, and a much powerful processor. The Moto E6 arrived last year with a Snapdragon 435 SoC, 16GB of internal storage, and a 3,000mAh battery.

The Moto E7 may arrive as early as the last week of this month. It should cost around $150 for the base variant with 2GB RAM. The leaked live images show the phone in peach and blue colors. It remains to be seen if Motorola has more color variants of the Moto E7 in the works.