Microsoft might launch an official Surface Duo protective case alongside its upcoming dual-screen smartphone. Another photo of the Android-powered handset hit the social media earlier this week, courtesy of Microsoft CPO Panos Panay. The image, embedded below, shows Panay holding a Surface Duo prototype that appears to be wrapped in some kind of a lightweight shell.

The cameo didn’t go unnoticed for too long. Then again, that’s hardly indicative of the accessory’s salience. If anything, whatever’s protecting the Surface Duo Panay is holding in the shot is pretty inconspicuous. Take a look at the original image first:

And then see how this shape compares to the device Microsoft announced last October: 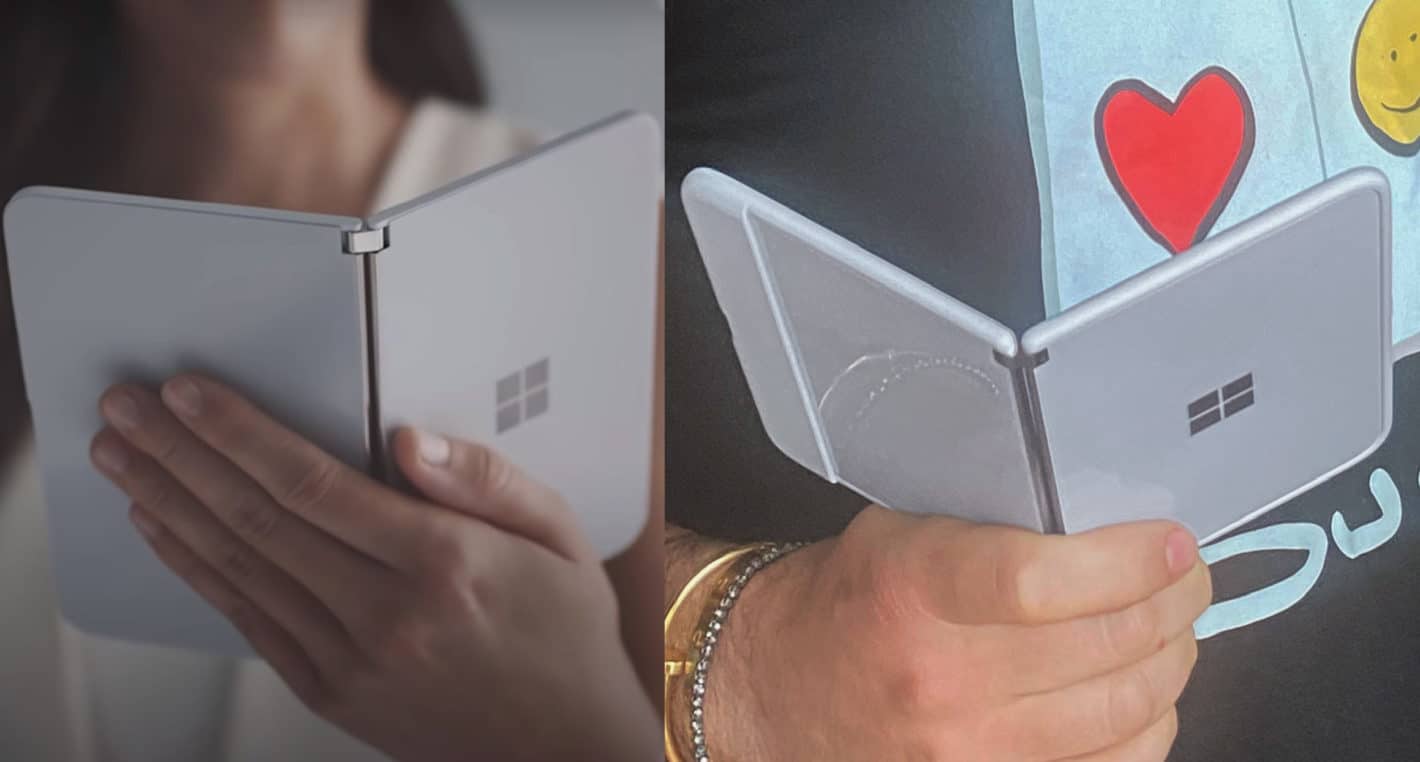 Naturally, it’s extremely unlikely the unit to the right is a consumer-grade piece of hardware. Meaning the Surface Duo should still be much more similar – or identical – to the example on the left.

But the extra-rounded corners and the indent line following the edges of the device suggest this may be a separate protection layer instead of just a bulky prototype.

Microsoft is no stranger to Surface-series accessories, though it has so far shied away from traditional protective covers.

If anything, many of its product design choices make devices such as the Surface Pro range feel undeserving of pampering, so to speak. A magnesium chassis is nothing to scoff at, which is precisely what the Surface Duo is set to feature.

Of course, it is extremely unlikely the two-screened phablet launches bundled with a free case. Such a move simply wouldn’t fit Microsoft’s M.O. – particularly in the price bracket the Surface Duo is clearly targeting.

For added context, the lineup’s rumored to debut at between $1,200 and $1,500. An official Surface Duo case likely wouldn’t be on the budget end, either, to put it mildly. So, if it eventually ends up happening, expect prices on par with the best first-party Samsung cases for Galaxy flagships.

As for the Surface Duo’s availability, much uncertainty is still surrounding Microsoft’s productivity-focused gadget. Last fall, the tech giant said its first-ever Android smartphone will hit the store shelves during the 2020 holiday season.

A lot has happened in the world since, lending to speculation Microsoft might push back on that release window.

While a minor delay wouldn’t be surprising, the same can’t be said of subsequent reports claiming Microsoft’s first Android smartphone could actually launch way sooner. In any case, an update on the official Surface Duo roadmap should arrive this summer.