According to the listing, the upcoming gaming phone from Lenovo will be powered by the Qualcomm Snapdragon 865+ SoC. The chipset is tipped to launch sometime this month, featuring significant upgrades over the vanilla Snapdragon 865.

We’re looking at an overclocked CPU with a maximum frequency of 3.09GHz. The octa-core CPU features a Kyro 585 Prime core operating highest at 3.09GHz, three Kyro 585 Gold cores operating at 2.42GHz, and four power-efficient Kyro 585 Silver cores operating at 1.80Ghz. The Snapdragon 865, on the other hand, has a maximum clock speed of 2.84GHz.

The new chipset incorporates the same Adreno 650 GPU as the Snapdragon 865. However, there’s still a significant improvement in GPU performance, which is ideal for a game-centric smartphone.

The UX score of 100,176 points means AnTuTu believes the display might have a 144Hz refresh rate, which would again make sense for a gaming phone.

It could be an OLED panel with a resolution of 2340 x 1080 pixels. The AnTuTu listing also reveals that the upcoming Lenovo Legion gaming phone will run Android 10 out of the box.

Lenovo last month confirmed that its Legion gaming smartphone would arrive in July. While the exact launch date is still a mystery, the device keeps popping up on the internet quite often.

Past leaks and rumors suggest the phone to come with two USB Type-C ports, which would help greatly with gaming. An in-display fingerprint reader, a 64-megapixel dual rear-camera setup, a side-facing pop-up selfie camera, and dual speakers are also among expected features.

A 4,000 mAh battery seems a bit low for a gaming smartphone, though. We’ll have to wait for more credible reports or the official announcement for confirmation on that.

Lenovo’s Legion gaming phone will arrive later this month with 5G connectivity, gamepad accessories, and some kind of liquid cooling technology. It will be pitted directly against the ASUS ROG Phone III, which also likely features the Snapdragon 865+ chipset. The ASUS gaming phone launches on July 22. It’ll be interesting to see how the two gaming smartphones fair. 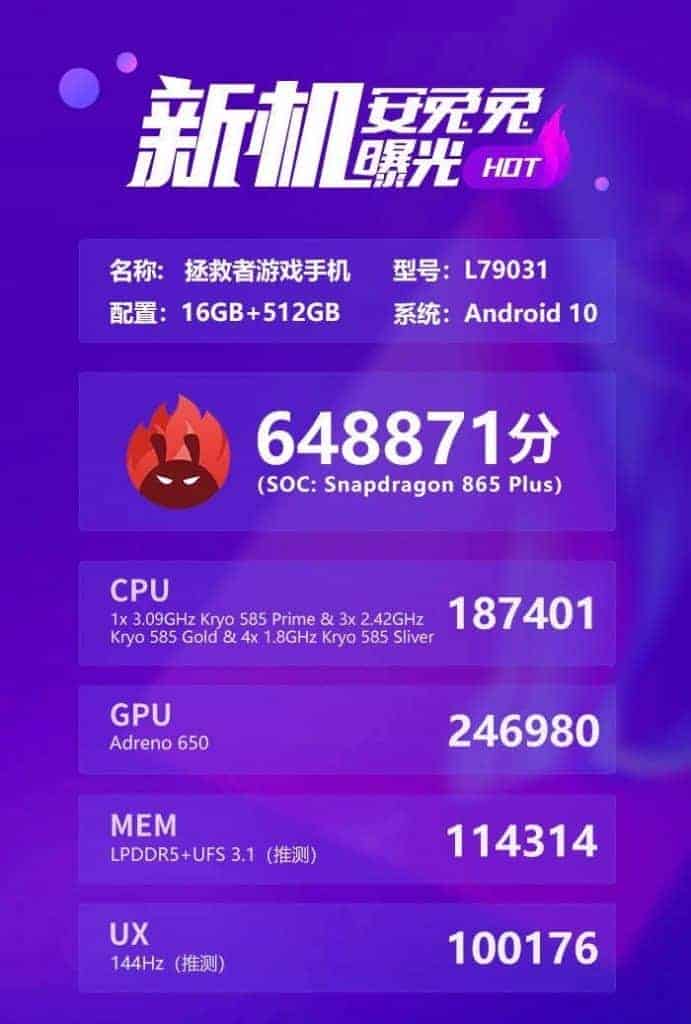