Samsung’s Galaxy Note 20 is due for a reveal next week and there are bound to be some accessories shown off for the device, like this new case that should help keep the phone a tad cleaner.

To be fair, it’s not really the phone itself that will be a tad cleaner, but the case. And thereby your hands. A leaked image has popped up of a new case for the Galaxy Note 20 that will come directly from Samsung. It’s part of the Clear View cover line, and it comes with an antimicrobial coating.

Though it isn’t clear what type of antimicrobial coating is on the outside of the Smart Clear View Cover for this device, having it at all is better than not having it.

If anything it could provide peace of mind for users that choose to buy it. This also won’t be the only case accessory that Samsung releases for the phone. It is however probably going to be one of the most popular ones.

As the Smart Clear View Cover has been around for quite a few generations of Samsung’s Galaxy S and Galaxy Note series devices. Worth noting is that it doesn’t appear Samsung has changed much with this case.

Based on the image, it looks pretty similar to the ones that were released for the 10 series phones and prior.

Samsung should release a version for both Galaxy Note 20 variations

Samsung is likely to release these new Smart Clear View Covers for both variations of the Galaxy Note 20. Meaning the standard model and the ultra model.

The leaked image, which comes from Roalnd Quandt, only shows covers for the Galaxy Note 20 Ultra. But it would be pretty strange for Samsung not to release a version for the non-ultra model of the phone.

Samsung is also releasing the covers in colors that mostly match the colors of the device. In this particular image, there is one that should match up with the black model, and one that matches up with bronze model.

There also appears to be a silver Smart View Clear Cover. So this will perhaps match the color of the gray model. That being said, you can obviously buy whichever color case you like. Regardless of the color of the phone you’ve chosen.

Expect these to be shown off during the Unpacked event on August 5. And it’s a good possibility customers will be able to pre-order them alongside the phone. Or soon thereafter. 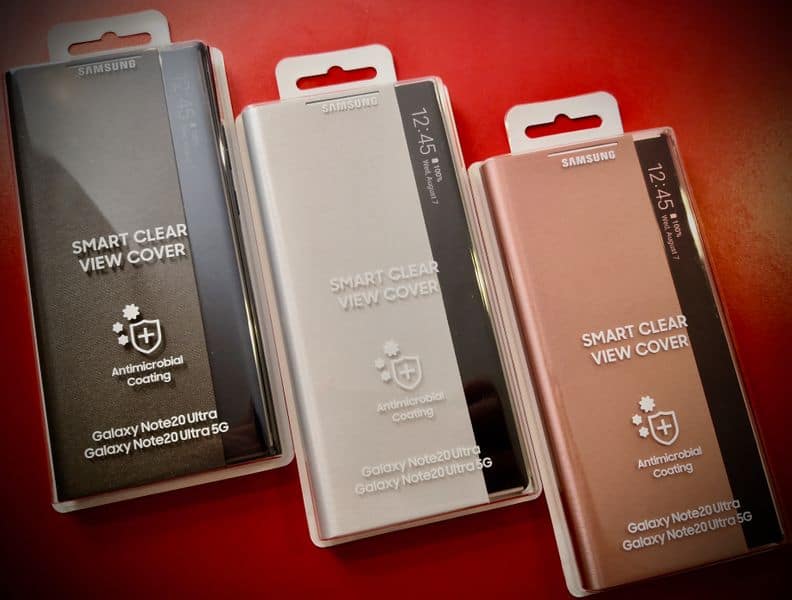