Huawei has now issued an official response to a UK decision to ban its equipment and remove current installations. The Chinese tech giant took to Twitter just hours after the decision was reached.

In a statement attributed to company spokesperson Ed Brewster, Huawei denounced the move wholesale as both disappointing and politically-driven. The Huawei spokesperson also alluded to sentiments echoing statements made by UK Digital Secretary Oliver Dowden during the announcement.

Namely, the company says that the decision is “bad news” for the UK’s mobile users. It will potentially, Huawei says, “move Britain into the digital slow lane.” It’ll also cost more money. And it will deepen the “digital divide,” Huawei continues, noting that the decision ‘levels down’ UK 5G bids and connectivity instead of ‘leveling up’ the networks.

In a statement made alongside the ban’s announcement, Secretary Dowden noted that only UK carrier O2 will go unaffected by the Huawei ban. Moreover, Mr. Dowden pointed out, it will set UK 5G efforts back as much as three years.

What does this Huawei ban mean for carriers in the UK?

The newly-instituted ban on Huawei equipment in the UK comes with several implications. As of the end of 2020, UK carriers will no longer be able to purchase equipment from the world’s largest 5G supplier. But carriers need to also remove all Huawei equipment that’s already in place by 2027.

That equipment would arguably all be removed by that final date anyway, as new equipment is released and replaces the old. But this ban means that Huawei can no longer offer equipment at all. As pointed out by Huawei, it effectively brings an end to a 20-year relationship between the UK and the company. Huawei is promising, via its announcement, to continue supporting its customers ‘as a responsible business’.

But it also claims that this decision comes back as much to US trade policy as anything else. And is not about security, according to the company. Huawei says that it is confident in its ability to ensure the resilience and security of its equipment.

That’s despite that US sanctions prevent the company from working with its usual partners. Forcing the company to turn to third-parties that UK leaders have begun referring to as “untrusted.”

Huawei plans to conduct a detailed review and will try to work with the UK government, it says, to try and determine how it can best contribute to a “better connected Britain.”

Now, even in the leadup to the ban decision, Huawei’s business in the UK is already beginning to show signs of strain. Former BP chief executive and UK chairman of Huawei Technologies Lord Brown has reportedly turned in a two-month notice to the company. He will be stepping down from the board in September — around six months earlier than his term expires.

Lord Brown was previously cited with comments on the matter in an interview with Reuters. The executive indicated that there’s no diplomacy in the UK, with regard to Chinese telecoms equipment. Especially as that concerns Huawei. The executive implied at the time that the country was in danger of simply throwing away a “very long relationship” with China.

BT chief executive Philip Jansen also reportedly echoed the sentiment. The executive reportedly said on Monday that removing Huawei would take a decade. And that it would significantly escalate short-term network security risks. 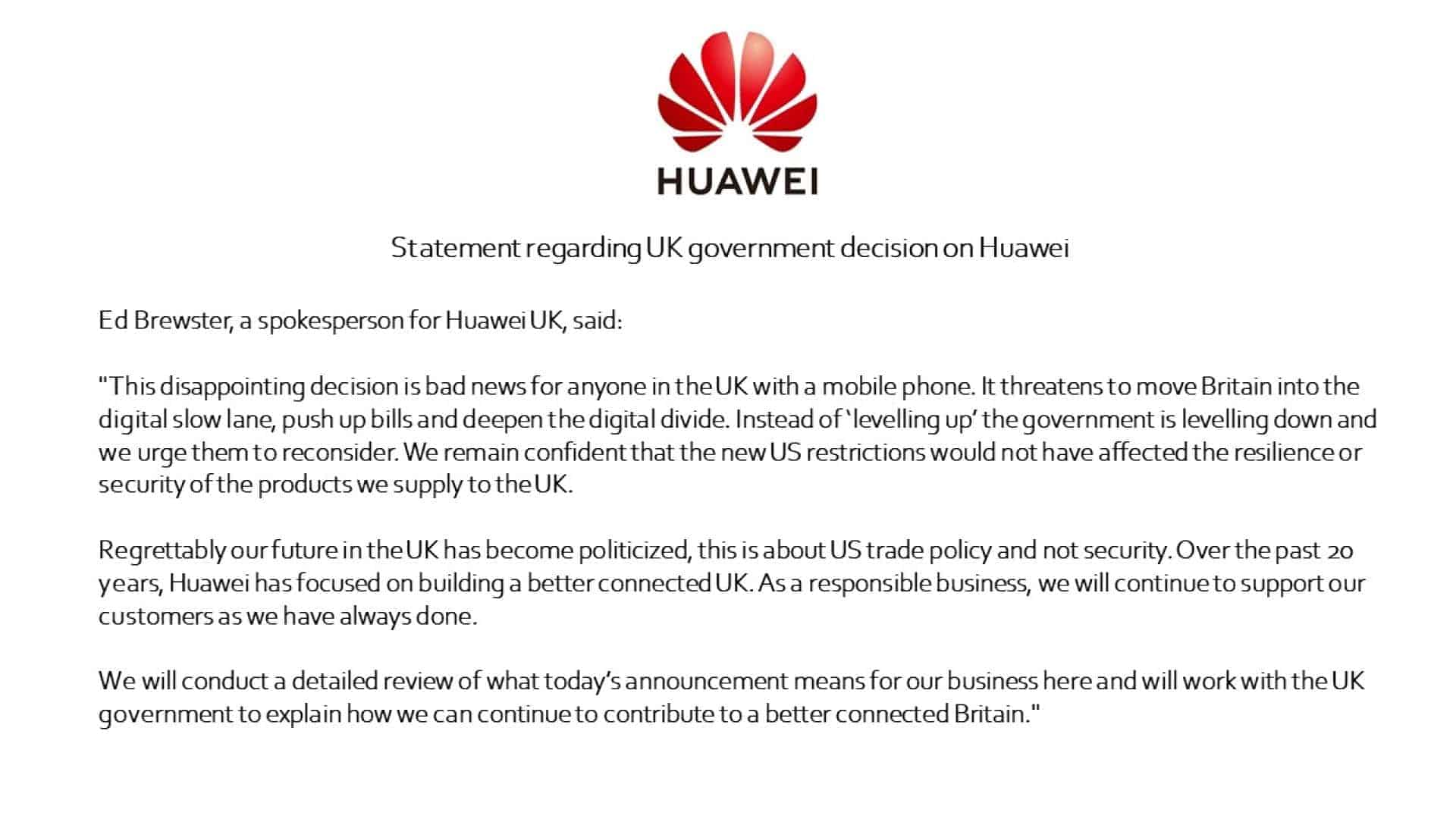