In an attempt to persuade developers to use Huawei Mobile Services (HMS), the Chinese smartphone giant has launched an app innovation contest called Apps UP. The company is inviting developers from around the world to compete for a total of $1 million in cash prizes.

Huawei is seeking developers to leverage the functionality provided by HMS Core to create innovative apps and games.

The company gave a few examples of the integration with HMS Core. Sketch AR is one such app that uses Huawei HiAI to create a smarter app for virtual art creation. Similarly, StorySign uses Huawei HiAI Optical Character Recognition (OCR) to scan text and integrates Machine Learning Kit to translate books into sign language to ensure deaf children can enjoy them.

Huawei says its Huawei Mobile Services currently has more than 1.4 million developers on board. There are also over 60,000 apps connected to HMS Core, serving Huawei device users in over 170 countries and regions.

Huawei app contest: How to enter

It is already live and registrations will be open until August 30, 2020. You can enter as an individual or as a team of up to three. A team can submit a maximum of five apps.

You must submit your app on the official contest website by August 30, 2020. A regional panel of judges will then shortlist the 20 best apps each for the aforementioned five regions. The selected apps will be put to the public review from September 21, 2020.

The final round of this contest will be in October, with the winning apps in each of the five regions taking away $200,000 in total cash prizes. The total prize amount adds up to $1 million globally.

There will be five prize categories in total. There are the Best App, Best Game, Best Social Impact App, and Most Popular App categories, as well as an Honorable Mention category. Winners are also eligible for additional incentives, such as AppGallery promotional resources and Huawei cloud resources. Huawei also promises free access to Huawei Developers events, courses, and certifications for the winners of the Apps UP contest.

Visit the official Apps UP contest page to learn more and register. 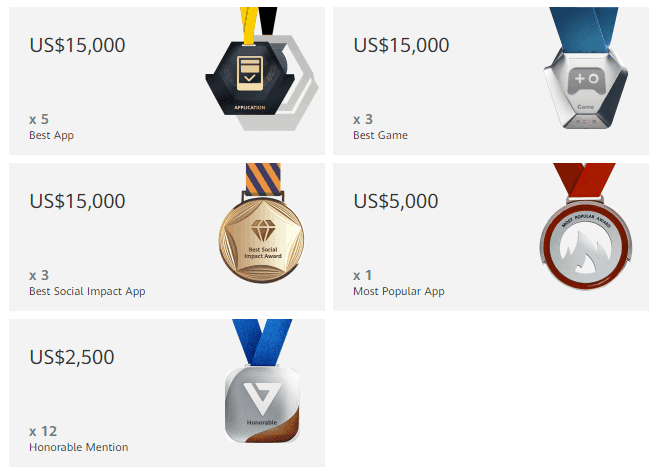