The HONOR Magic Earbuds may resemble Apple’s AirPods, but they’re quite compelling in their own right.

HONOR supplied us with a review unit of the Magic Earbuds, but didn’t have a say in our opinion, nor did they see this review before you. We’ve been using the device for a couple of weeks before forming an opinion.

That being said, these earbuds are quite good. They’re a different take on the Huawei FreeBuds 3, in a way. Those are open-ear earbuds, while these are not. The HONOR Magic Earbuds do come with a rubber seal on the top, which changes things a bit. They also offer Active Noise Cancelling, in a way… it’s different compared to the FreeBuds 3. These earbuds basically come as an evolution of HONOR FlyPods Lite, and are quite similar in terms of the design.

The earbuds could be a bit smaller, but the charging case is just right

The HONOR Magic Earbuds are made out of plastic. That goes for both the earbuds themselves, and the charging case. They resemble the Apple AirPods 1 and 2 in terms of the shape, though the charging case is considerably different, more on that soon. The earbuds come with a silicone seal for your ear, which helps with noise isolation.

EarBuds themselves are a bit larger than I would want, to be quite honest. They’re larger than the Huawei FreeBuds 3, though that silicone seal is part of the reason why. The difference is not huge, but it’s noticeable once you’ve used something a bit smaller. The build quality of earbuds themselves is quite good, though.

Now, as far as the charging case is concerned, it’s like a long, thick stick. It’s a bit thicker than I would have liked, but it’s easily pocketable. This form factor may suit some of you, as it’s really easy to slip into a pocket next to something else, due to its narrow build. The charging case has an LED indicator on the inside and outside, and a Type-C port on the back.

The earbuds fit in my ears really nicely, with the standard-sized tips, that come on the earbuds themselves. You do get more sizes in the box, though, in case the default ones don’t fit you. You’ll find the right fit without the problem. The earbuds themselves are quite comfortable to wear, I have to admit.

Make sure to enable "Use High-quality Audio' option, if not enabled by default

The audio on these is good, but it may not seem like it out of the box. If you paired these up with a non-Huawei or HONOR phone, they will sound worse than they should. Luckily, that is fixed really easily, as the ‘high-quality audio’ setting will not be enabled. You can luckily change that easily in the pairing settings. Just try to find the ‘Use High-quality Audio’ option aka ‘AAC’.

Audio quality is good, but not great

Now, in terms of audio quality in general, it’s good, but it’s not great. HONOR used a trick to achieve really good bass on these earphones, and that is noticeable. It makes the sound seem, well, muddled, for the lack of a better word. For comparison’s sake, the audio on the FreeBuds 3 sounds noticeably clearer. 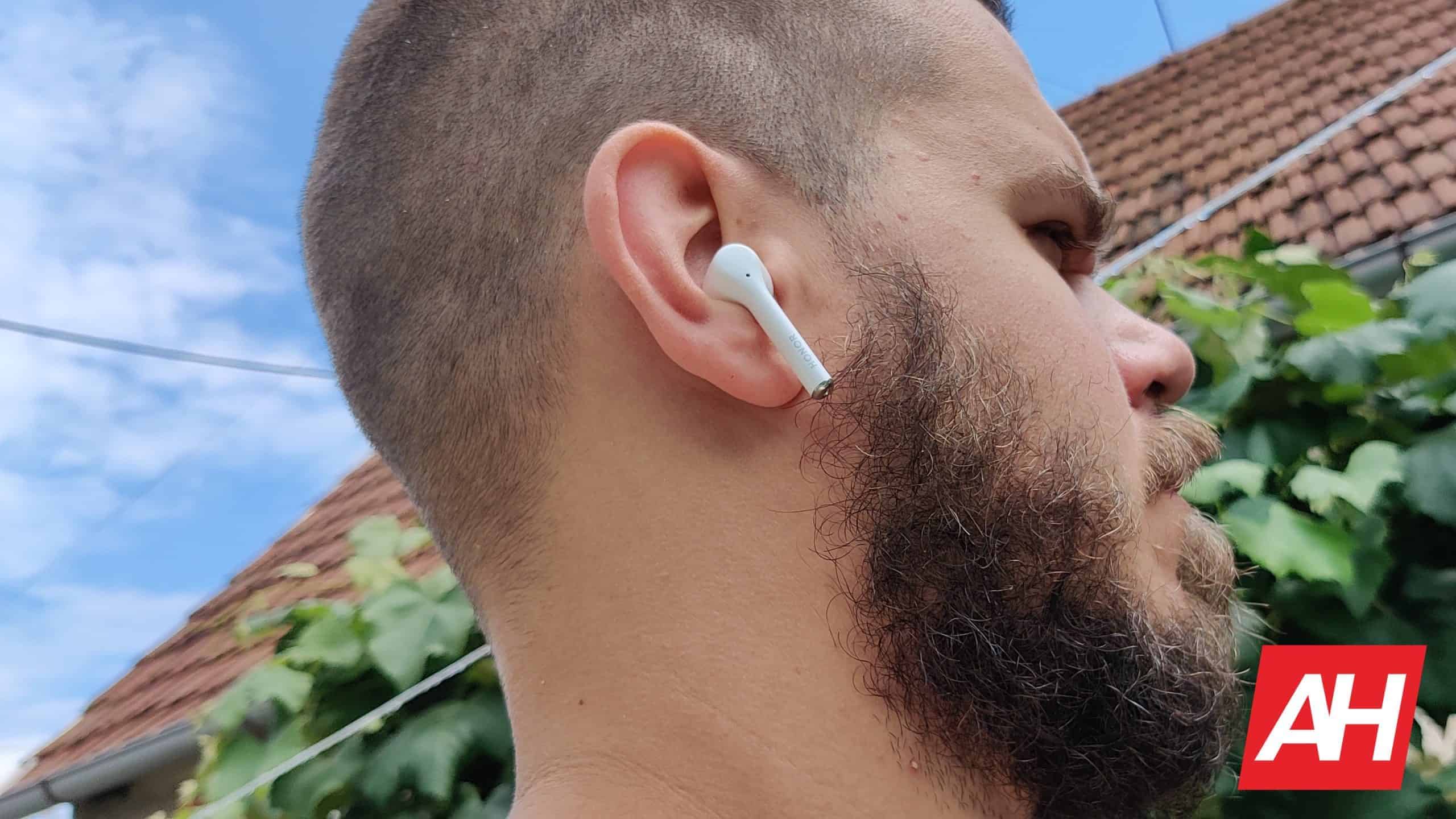 Don’t get me wrong, the audio is not bad, but you’ll notice that muddled sound thanks to bass boost. The audio is really good overall, though, across the spectrum. It can handle the lows, mids, and highs really well, just manage your expectations. Don’t compare these to earbuds that are twice the price of them, and you’ll be fine. The Hybrid Active Noise Canceling does its part, that’s for sure, and it’s a neat option to have.

I did not experience disconnects during my testing, the connection worked perfectly. Once initially synced, the earbuds connected straight away when I pulled them out of the charging case.

These earphones are excellent for making calls

Now, some of you will probably want to know more about call quality. Well, these earbuds are actually really, really good for taking calls. I had a great experience with the Huawei FreeBuds 3, and did not expect the same with these, but I was surprised. The Hybrid Active Noise Canceling was immensely useful while taking calls, and I was able to talk to people even when out and about, in loud areas.

People on the other side of the line didn’t have many complaints either, a couple of them said I sounded “weirder” than usual, but did not have any specific complaints. The audio was perfectly fine. That is what I noticed as well, when tables turned. These earphones come with three microphones, so HONOR really did focus on call quality, and it shows.

Touch controls are responsive, but it would be nice to have more remapping options

The HONOR Magic Earbuds, much like many other true wireless earbuds, come with touch controls. Such controls can be really useful when you’re out and about for music control. You can quickly interact with one of them to play / pause music, for example, without pulling out your smartphone. That being said, there are a couple of different touch control options in the HONOR Magic Earbuds. Do note you’ll need the company’s AI Life app to customize these, though. 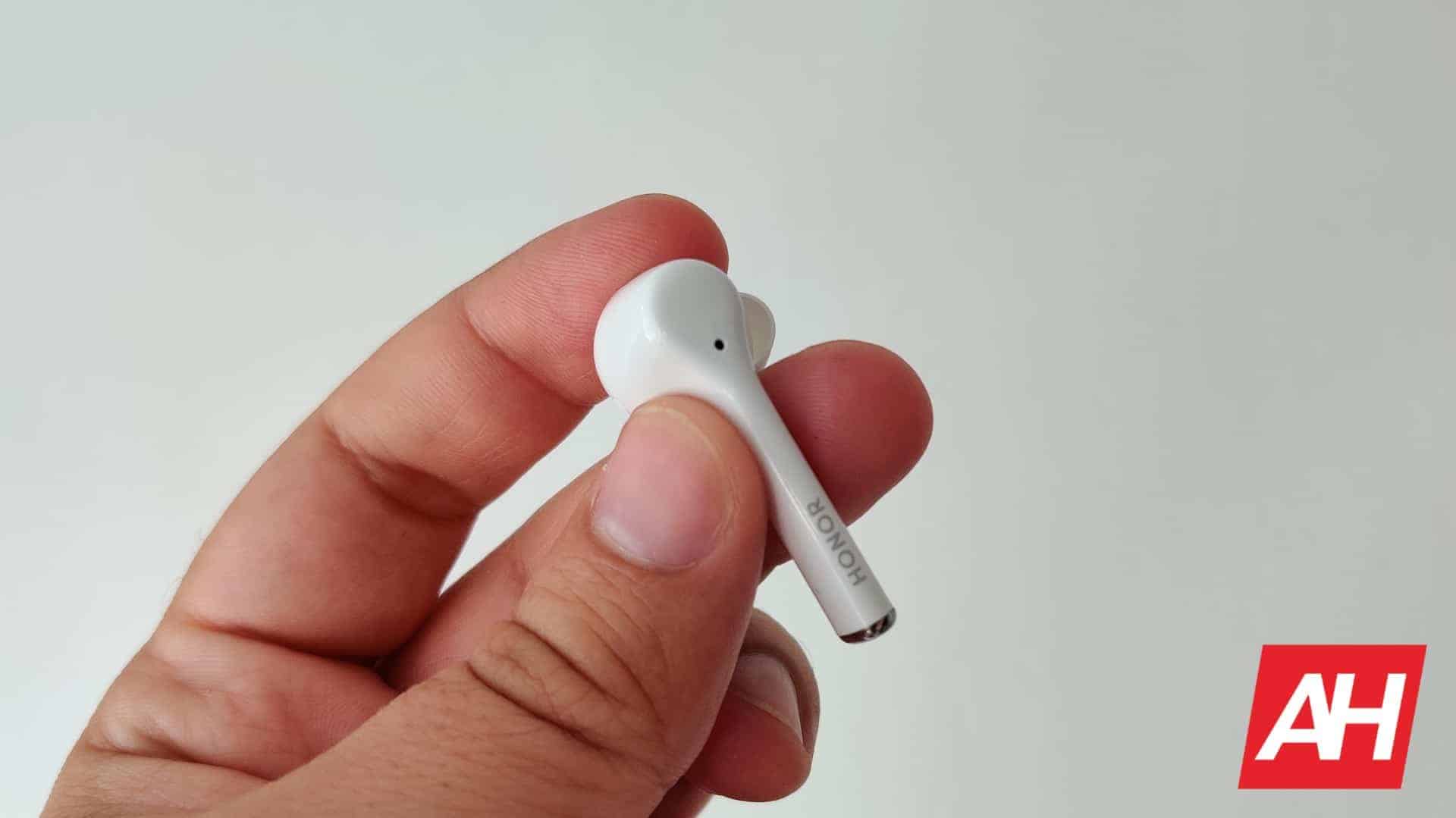 The thing is, you can even assign different actions to different earbuds. You have two options for each. You get a double-tap option, and a touch and hold option. So, you can set up the right earbuds to play / pause audio when you double tap it, while you can use that same shortcut to the other, but get to skip a song. Do note that you cannot exactly do much with the touch and hold option, more on that soon. These earbuds can also pause music when you remove them, and continue when you put them back in… the thing is, this only works with EMUI 10+.

If you touch and hold the side, you’ll activate / deactivate ANC. That is the default setting and you cannot swap it for something else. You can, however, disable it entirely. If you don’t want to use ANC, for example, you can disable this option altogether. You may want to do that as I’ve activated that by accident several times. Touch controls do work really well in general, though.

Battery life is not great, but that probably won't bother many people

The battery life on the HONOR Magic Earbuds is passable, nothing to write home about, though. The company claims that the charging case can sit on standby for 12 days (with earbuds in it). That is the only aspect we haven’t tested. The company also says that you can get 2.5 hours of call time before the earbuds die, that’s with ANC off. With ANC on, the claim is around 2 hours. Well, the first metric is accurate, around 2.5 hours sounds about right. The moment you turn ANC, however, battery life decreases… we were able to get around an hour and 40 minutes of call time. 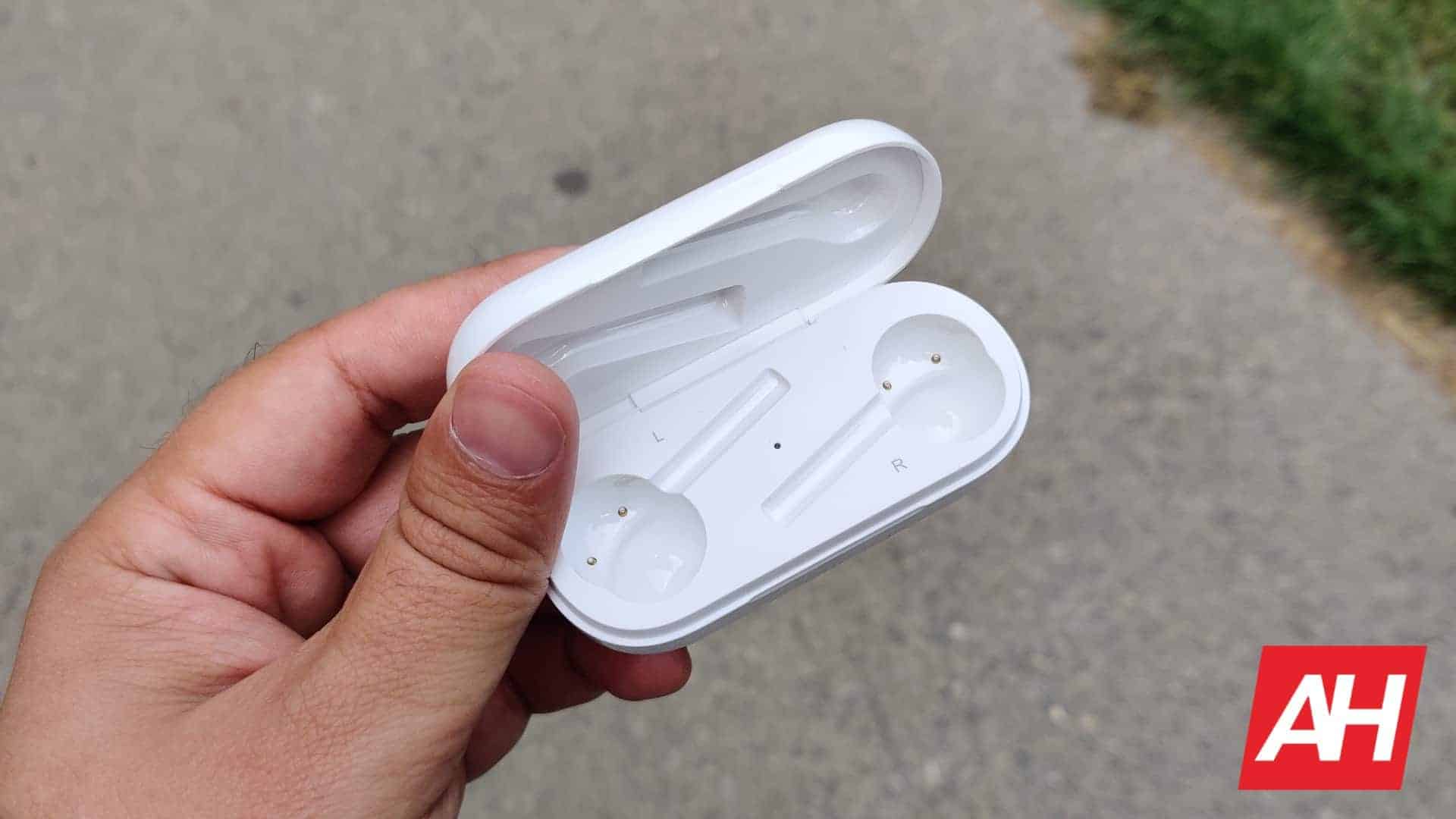 In terms of general music listening, things are a bit better. I’ve been able to get over 3.5 hours without ANC, and slightly under 3 hours with ANC on. That is close to what HONOR said these earbuds have to offer. So, this battery life is not great by any means, but it’ll be okay for most people. The charging case can recharge these earbuds in about an hour, fully. The charging case itself, on the other hand, charges for around an hour and a half.

HONOR Magic Earbuds are good, but they're not great

So, what’s the gist? Well, the HONOR Magic Earbuds are good, but they’re not great. The battery life could be a lot better, while there are a couple of complaints in the sound department as well. These earbuds are priced well when you take into account price tags of its competitors, though. If you don’t have over €100 to spend on a pair of earbuds, these are surely worth considering, at least. 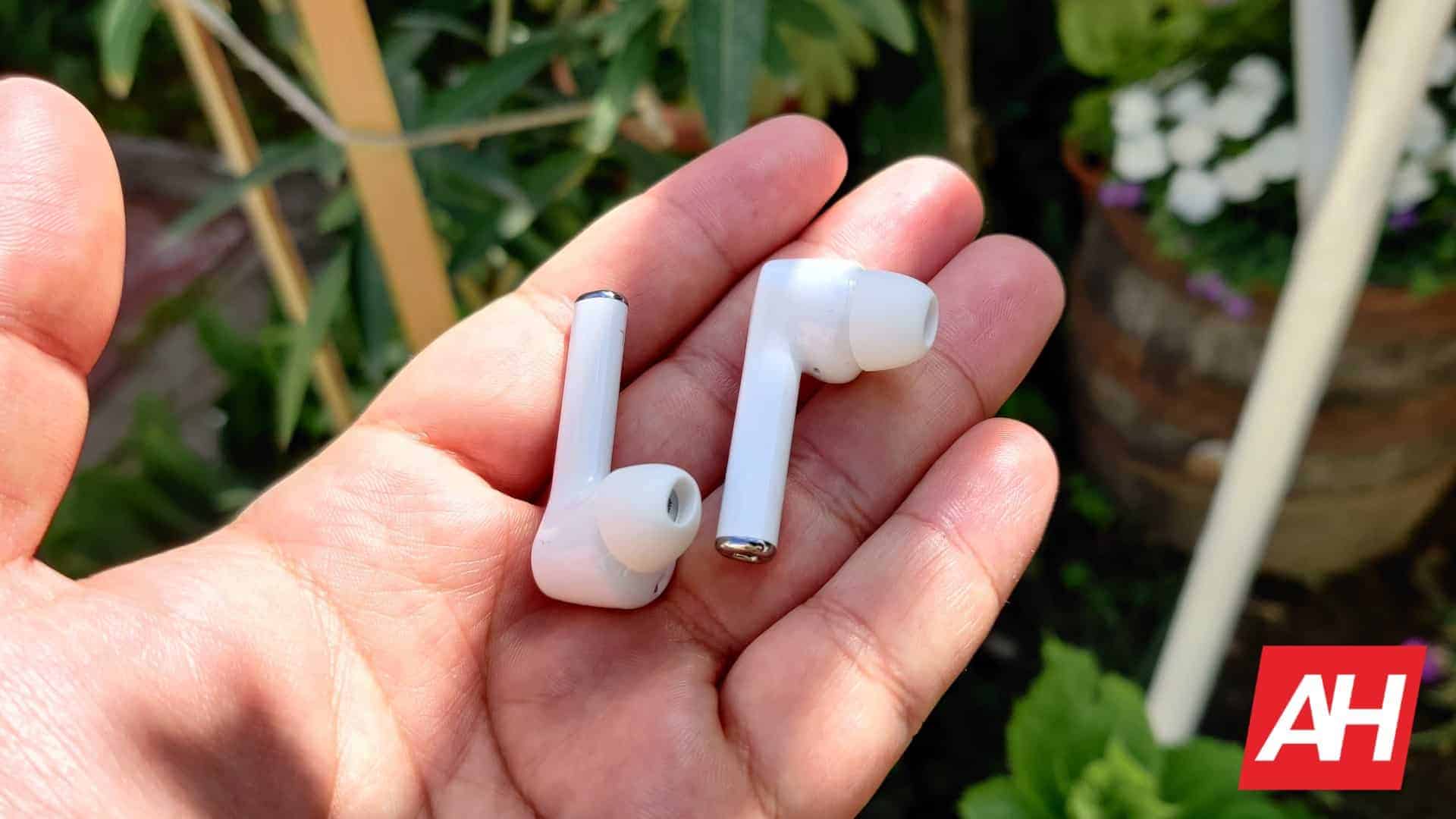