A former Google engineer has suggested that the company may have an “internal blacklist” of conservative news outlets. The claim came after several conservative-leaning online publications including Breitbart, The National Pulse, The Drudge Report, Newsbusters, The Bongino Report, and Human Events briefly vanished from Google search results earlier this week.

“It appears to have revealed the existence of another blacklist that disproportionately targets conservatives,” Mike Wacker, former Google engineer, said in a message to Mediaite.

“The glitch is that sites on this blacklist disappeared from Google search results, but the existence of the list is very much by design. And that raises a major question: Why was this blacklist created in the first place, and what else is it used for?”  Wacker questioned.

Google said it was a technical error and was “unrelated to the content or ideology” of the sites affected. “We are aware of an issue with the site: command that may fail to show some or any indexed pages from a website,” the company said without offering any explanation. “We are investigating this and any potentially related issues.”

Google has fixed the issue since and all the affected sites are now showing up in search results. However, the whole incident has raised a few eyebrows.

Does Google have a blacklist of conservative news outlets?

Sundar Pichai, CEO of Google, in his testimony to Congress in December 2018 had said that the company does not manually intervene on any search result. This was the reason why search results for the word “idiot” showed pictures of President Donald Trump at the top.

However, Wacker suggested that recent events are manually curated and are a product of an algorithm created by a human or an AI. Wacker was fired from Google last year amid a row over his conservative ideology.

His remarks suggest that Google may have a blacklist aimed at suppressing certain conservative news outlets. Normally, they “penalize” those sites by throttling the search results to suppress their visibility. But this time around, they ended up blocking them completely. Possibly the AI may have found something very “offensive” on those sites.

Dr. Robert Epstein, a researcher who has argued Google has the power to sway up to 10 percent of American voters in the 2020 election, also agreed with Wacker’s assessment. A person or algorithm at Google likely added “breitbart.com and other URLs to one or more of the company’s blacklists. Then, perhaps after some pushback, someone pulled those URLs off the blacklists,” Epstein said.

This isn’t the first time Google is facing scrutiny over possible censorship of search results. In 2019, some leaked internal documents suggested the search giant was seeking to rank websites according to “quality.”

The documents released by the right-leaning Project Veritas showed Fox News ranking below CNN and MSNBC. State-backed Russia Today was well above Breitbart in that list. The recent incident may lead to enhanced scrutiny ahead of the 2020 election. 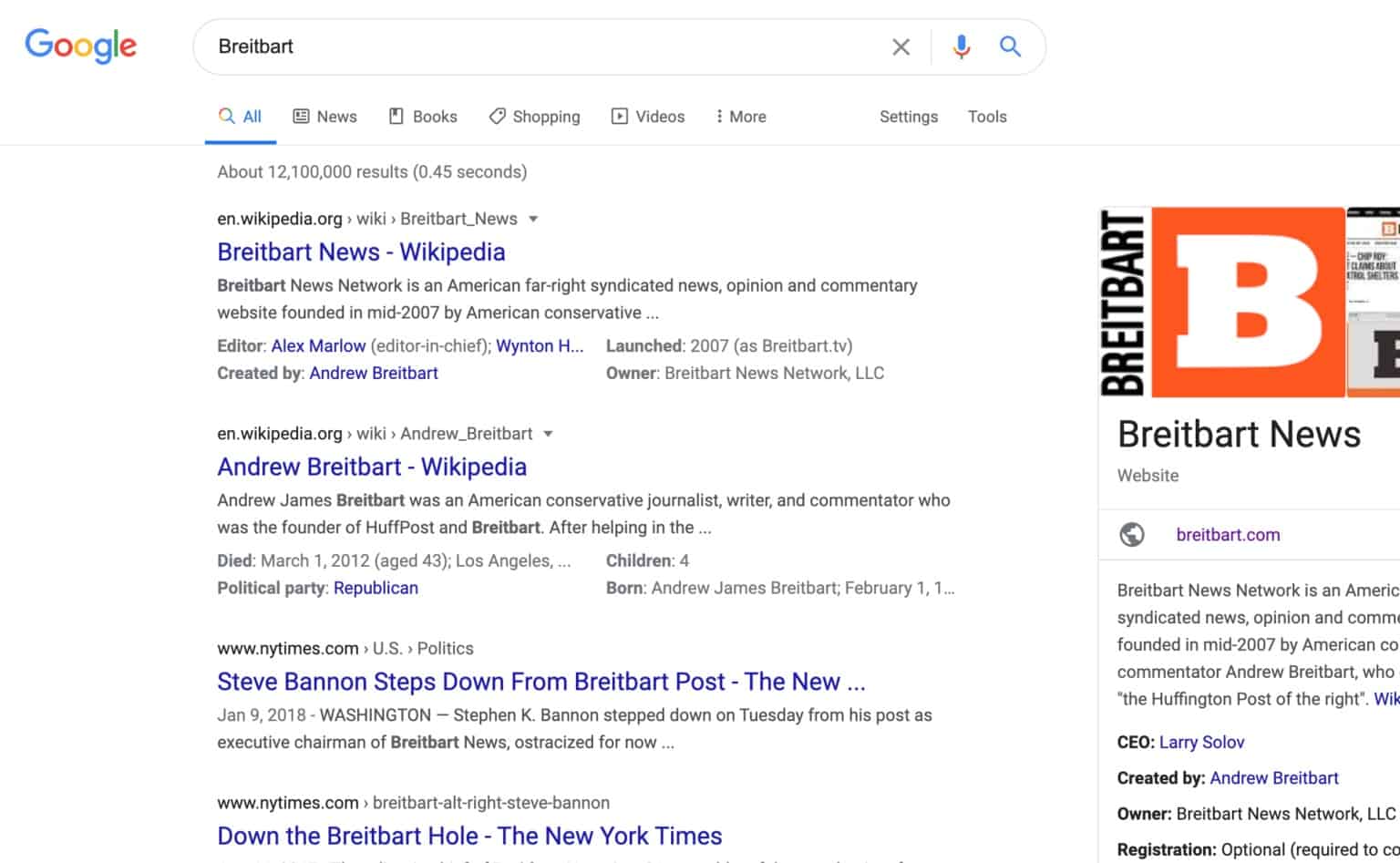