Digital Wellbeing from Google is a handy tool for helping users with digital detox. The company is currently testing a new feature to further enhance the user experience. With the latest version, the apps will now turn to grayscale when nearing the time limit.

Spotted first by Android Police, this new feature can be found in the Digital Wellbeing v1.32 beta. It is expected to be added to the public version of the app soon.

With Digital Wellbeing, users can set a daily app timer for certain apps like YouTube, Whatsapp, and Twitter. When the preset time limit is reached, the app will be closed and notifications are disabled.

After this new update, the apps will gradually turn to grayscale when the daily app timer limit is under one minute. With this, the user can get a heads up just before the app shuts down. Unlike the Bedtime mode, which turns the entire UI to grayscale, this change will only affect that particular app.

Weirdly, the time limit can be increased to allow more time to use it. As per the source, the screenshots taken when the app turns grayscale will be in two-tone color. Whereas in bedtime mode, screenshots of the grayscale UI are saved in color.

It is currently limited to the latest beta version

This suggests the new tweak is not a system-level change. Speaking of Digital Wellbeing, it does a lot more than just turning the UI to grayscale. The dashboard within the Digital Wellbeing section inside the Settings app gives a lot of information about the usage patterns.

The stats also include the number of times the device is unlocked and notifications received. It also shows a circular graph of the most used apps on a daily basis. The Digital Wellbeing feature was first introduced in 2018 exclusively for the Pixel smartphones running on Android 9 Pie.

The newly introduced Focus mode will help the user in avoiding distracting apps with a single tap. There is also a feature to set a schedule to turn on the Focus mode automatically. 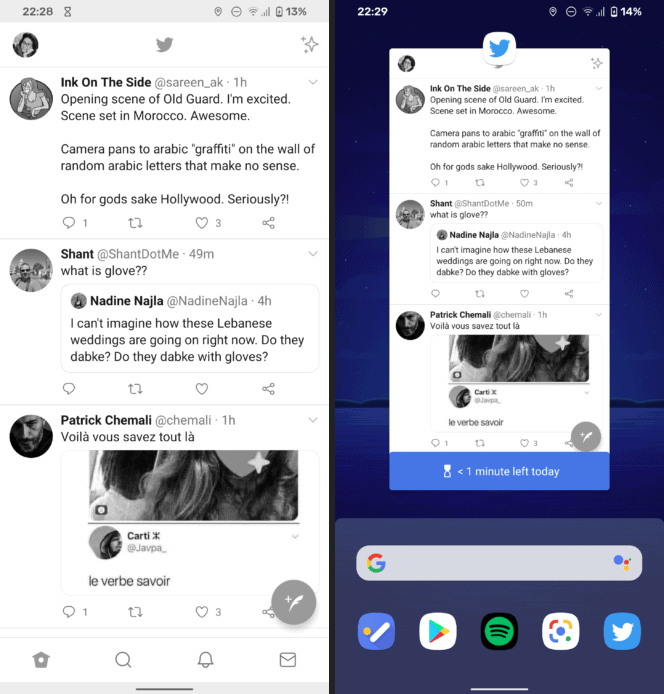