Yesterday, Google has finally brought the dark theme for Google Chat on both Android and iOS platforms. The app was launched back in 2017 and it has until now, featuring a bright background. But that changes now, as one of the most requested features, the dark theme is now finally making its way to the Google Chat.

In the official post states, "We’re enhancing Google Chat on Android and iOS with dark theme support. Dark theme is a popular feature that’s frequently requested by users. It creates a better viewing experience in low-light conditions by reducing brightness."

Dark Mode is something that arrived with Android 10 for all the phones. Interestingly, third-party app developers were ahead of Google in implementing a dark theme in their apps. People spend most of their time on their smartphones. And this can be harmful to the eyes, especially if you are operating your phone at night.

Dark theme for Google Chat is rolling out widely

Well, dark mode reduces the harm caused to the eyes because of the light background. Moreover, it provides a better viewing experience in low lighting conditions. Notably, the dark theme introduced for Google Chat follows a similar shade of dark grey as you have seen in other Google apps.

The official post also notes that this feature for Google Chat is rolling out widely for the users from July 29, 2020. And the feature will land on the majority of phones in about 15 days. Moreover, several users have already grabbed the update version 2020.06.28.321680887, which brings dark mode. However, note that there is nothing new except the dark mode theme for the Google Chat that this new update brings to the table.

Besides, you need not Apply the theme manually from Settings for Google Chat, as there is no in-app toggle to activate this feature. It follows your system settings, and if you have the dark mode turned on, you will see the same in Google Chat as well. Note that Google Chat is only available for G Suite accounts.

If you wish to know more about this feature and want to check the official post, you can head here. So, if you have not yet updated your Google Chat app, we recommend you head over to the Google Play Store and see if there is a new update for the app or not. Or you can tap here to head to Play Store or the App Store to check for the update. 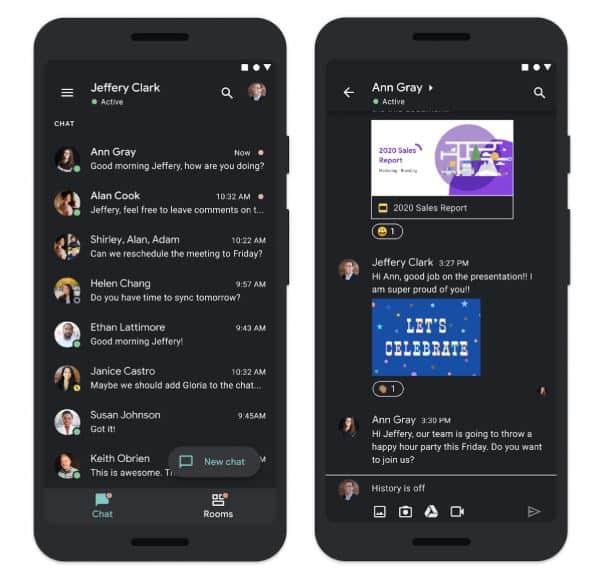