HMD Global, the company behind the Nokia smartphones, will likely announce three new smartphones at the IFA 2020. According to Nokiamob, one of them will be the low-cost Nokia 2.4 smartphone. If everything goes as planned, we might see the launch of Nokia 2.4, Nokia 6.3, and Nokia 7.3 smartphones during the virtual IFA event in September.

The fourth-generation smartphone in the Nokia 2 series recently got listed on the benchmarking website Geekbench. It is codenamed as Wolverine and runs on Android 10 out of the box.

Going by the previous launches, the upcoming Nokia 2.4 will also be part of the Android One family. According to Google, the Android One devices will receive at least two major OS updates and three years of regular security patch updates.

Nokia 2.4 to launch at IFA in September

The device will come powered by the MediaTek Helio P22 octa-core chipset built on the 12nm FinFET process. Compared to the Helio A22 quad-core chipset found on the last two-generations of Nokia 2 smartphones, it's undoubtedly a decent upgrade.

The variant listed on the Geekbench website packs 2GB of RAM. HMD Global might launch the 3GB RAM variant as well. While the 2GB variant offers 32GB of internal storage, the 3GB RAM variant doubles the storage to 64GB. There will also a MicroSD card support for further expansion of storage.

As per the source, the device will feature a 6.5-inch notch display with HD+ resolution and 19:9 aspect ratio. In comparison, the Nokia 2.3 sports a slightly smaller 6.2-inch HD+ display.

Additionally, it comes with 13MP + 2MP dual-camera setup on the rear and 5MP selfie camera on the front.These are the same set of cameras which can also be found on its predecessor. The device also houses a 4,500mAh battery, which should be good enough for a single day of moderate usage.

There should also be a dedicated hardware button for accessing Google Assistant. One of the color options for the upcoming Nokia 2.4 will be Light Purple. The company will likely skip the fingerprint scanner in order to keep the costs down. For secure authentication, the device will only use face unlock.

The complete details, including pricing and availability, will be revealed on the launch day. Based on the recent leaks, the Nokia 7.3 will be supporting 5G. It comes powered by the Qualcomm Snapdragon 7-series chipset.

HMD Global might opt for the Snapdragon 765G 5G Mobile Platform. This is the same chipset that also powers the OnePlus Nord 5G and LG Velvet 5G smartphones. 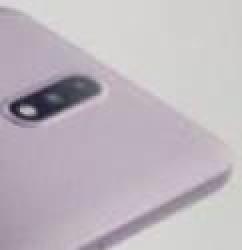