The Xiaomi Mi Band 5 has been all over the news lately, and it’s now finally official. The company has announced its new fitness band in China, while its global launch should follow soon.

That being said, the leaks were spot on. The Xiaomi Mi Band 5 is, once again, made out of plastic. Its strap is made out of silicone, and that was the case since the first Mi Band.

The Mi Band 5 features a larger display than its predecessor, a 1.2-inch panel. That is a color display, and it does support touch input. Xiaomi decided to utilize an OLED display once again, which is a good call.

Xiaomi included over 100 new animated watch faces, and characters from popular animated series. Characters from SpongeBob SquarePants, Hatsune Miku, and so on. Though that is the case on the Chinese model, it remains to be seen what will happen with the global unit.

One of the biggest changes from the Mi Band 4 is the new charging method. Instead of having a piece of plastic in which you need to slide in the Mi Band 5, you can take advantage of magnetic charging. 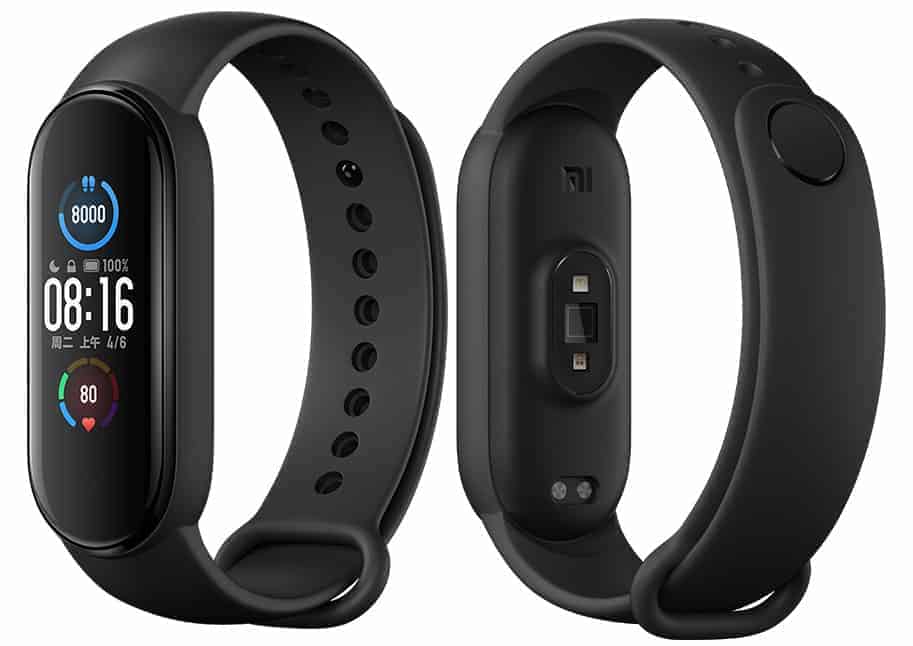 The device ships with a magnetic charging dock. The Mi Band 5 has two electrodes on the bottom, which will magnetize themselves to the charging dock when they’re close. This is a much simpler solution, without a doubt.

The charging cradle previous versions shipped with was adequate, but not as practical. It did not bother many people because Mi Band fitness trackers always had excellent battery life. This will make things easier, though, for sure.

The company also announced new, dual-tone straps with the device. The part wrapping the Mi Band 5 will be black, as the device itself, and the rest is colorful, well, depending on what color you get.

This looks much better than a solid color for the straps, as it makes it look more like a watch. The device also contains 11 new fitness tracking modes, and it also has a menstrual cycle tracking feature now.

PAI is included, as is improved sleep tracking

Xiaomi has included PAI (Personal Activity Intelligence) inside of this device as well. The device will also offer RED sleep information, in addition to deep and light sleep… for better sleep tracking.

The tracker does contain an NFC chip (one of its versions does), and comes with a built-in barometer. The global variant is rumored to include Alexa support, but that is not available in the Chinese model. The Mi Band 5 is also 5ATM water resistant, as expected.

A 125mAh battery is included, and it should offer 14 days of battery life with ‘typical use’. The device includes Bluetooth 5.0 LE, and a heart-rate sensor. The Mi Band 5 comes in a black color with straps in six different colors. Those colors are Blue, Brown, Olive Green, Pink, Red, and Yellow.

The device will go on sale in China on June 18. The non-NFC model is priced at CNY189 ($27), while the NFC model will set you back CNY229 ($32). Xiaomi is yet to release information on the device’s global launch.