Counterpoint has released its report on smartphone sales in Europe in Q1 this year, and it seems like COVID-19 took its toll. It caused a 7-percent market decline in Europe, compared to Q1 2019. Xiaomi managed to flourish, though, the company managed to grow 145% in Europe. More on that later.

Compared to the last quarter (Q4 2019), the difference is even bigger, 23-percent. Western Europe was hit the hardest, with 9-percent on average. Eastern Europe, on the other hand, experienced a 5-percent fall.

Italy was hit the hardest, with a 21-percent decline YoY. That was to be expected, as the European COVID-19 crisis basically started in Italy. The country has been hit hard by it. 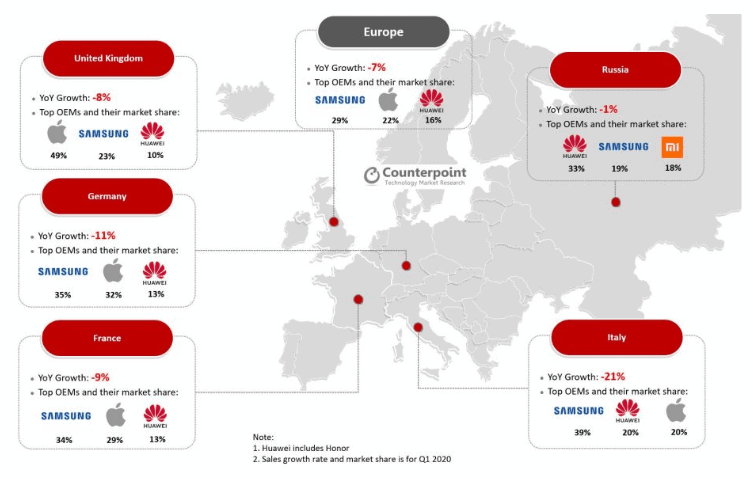 Online retailers managed to offset the negative impact to a degree, with aggressive online sales. Russia has seen the smallest decline, of only 1-percent, as it was not hit by COVID-19 as much as other countries.

That being said, one company flourished during this period, Xiaomi. That is the fourth-largest smartphone manufacturer in Europe, by the way. The company’s market share increased by 7-percent YoY.

Xiaomi is fourth-placed smartphone OEM in Europe, and it managed to grow 145% YoY

Apple is in second place with 22-percent of the market. The company grew 1-percent YoY, by the way. Huawei is third-place, and has experienced a huge decrease. The company dropped from 23-percent to only 16-percent YoY.

Based on Xiaomi’s increase, it’s possible that most of those users switched over to Xiaomi, though we’re only guessing. OPPO also managed to grow, as the fifth-largest smartphone manufacturer in Europe.

All other smartphone manufacturers are left with 19-percent of the market. They had that amount in Q1 2019, and nothing changed in Q1 2020. Counterpoint released information for the top 5 smartphone OEMs only.

So, Huawei’s market share managed to decrease the most YoY. It will be interesting to see how will the company do in the rest of 2020. The US ban is surely not playing in Huawei’s favor, but the company is doing everything it can to counter it.

Samsung is still untouchable as the number 1 smartphone OEMs, though Apple may close the gap by the end of 2020. The company’s iPhone 12 series will be competitively-priced, according to reports, and that could affect things.