The major reason for that is the COVID-19 pandemic, it seems. That is understandable, of course, and it was kind of expected. This is an extraordinary situation that the world had to face.

The pandemic caused the worst global smartphone market decline ever

To be completely accurate, Gartner reports that global smartphone sales declined by 20.2%. A senior research analyst at Gartner, Anshul Gupta, said that the "pandemic caused the global smartphone market to experience its worst decline ever".

He also noted that most of the leading Chinese manufacturers, and Apple, were severely impacted by the whole situation. They were hit by temporary closures of their factories in China, and reduced consumer spending.

Gartner released a table with more information on the matter. This table clearly shows the aforementioned decline. It hit some smartphone manufacturers more than others. 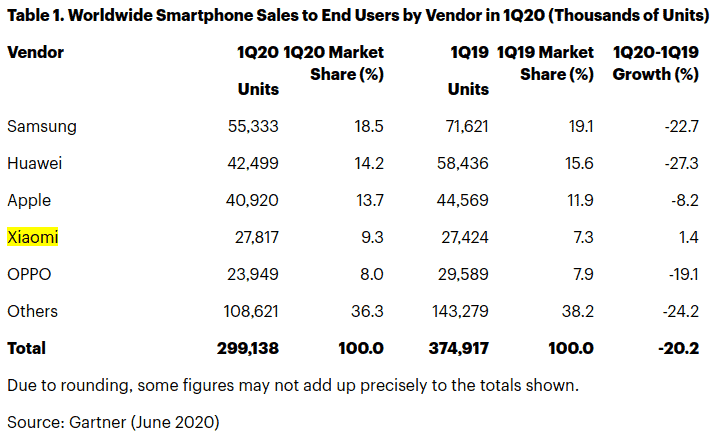 Starting with the largest smartphone OEM in the world, Samsung. Samsung's sales declined 22.7-percent in Q1 2020, YoY (Year-over-Year). The company still maintains the number 1 spot, though, with an 18.5-percent market share.

Huawei's sales declined 27.3-percent, and it is holding a 14.2-percent share of the global market. The third-placed company is Apple with 13.7-percent. Its sales decreased 8.2-percent in Q1 2020, YoY.

Xiaomi comes in as a fourth-placed company, and the only company whose sales did not decline in that period, at least out of the top 5 OEMs. Xiaomi's sales actually increased 1.4-percent. The company is holding 9.3-percent of the global market.

OPPO rounds up the top 5 list with 8.0-percent of the global smartphone market. Its sales declined as well, quite a bit. The company's sales dropped 19.1-percent.

Mr. Gupta said that Samsung was impacted by its inefficient online channel combined with the lockdown. Huawei, on the other hand, recorded the worst performance among the top five smartphone vendors. Mr. Gupta also noted that the company will have a "challenging year", mainly due to the US ban.

Apple, on the other hand, had a strong year thanks to its new product lineup, says Mr. Gupta. He also notes that the company would have probably reached a record if not for the pandemic.

Xiaomi was helped by strong sales of its Redmi devices in international markets, and aggressive online channel focus. The company outshined all the other smartphone OEMs in Q1 2020.