The Samsung Galaxy Z Flip 5G just got listed on Bluetooth SIG, and also got NFC certified. Those listings not only confirm that the Galaxy Z Flip 5G is right around the corner, but its name as well.

We already knew that the SM-F707 is the model number of the Galaxy Z Flip 5G. Well, several variants of that model number got listed on Bluetooth SIG.

Those model numbers include the Samsung SM-F707U, SM-F707W, SM-F707U1, SM-F7070, SM-F707N, and SM-F707_SPR. Those could stands for different regions, memory configurations, or something else entirely. 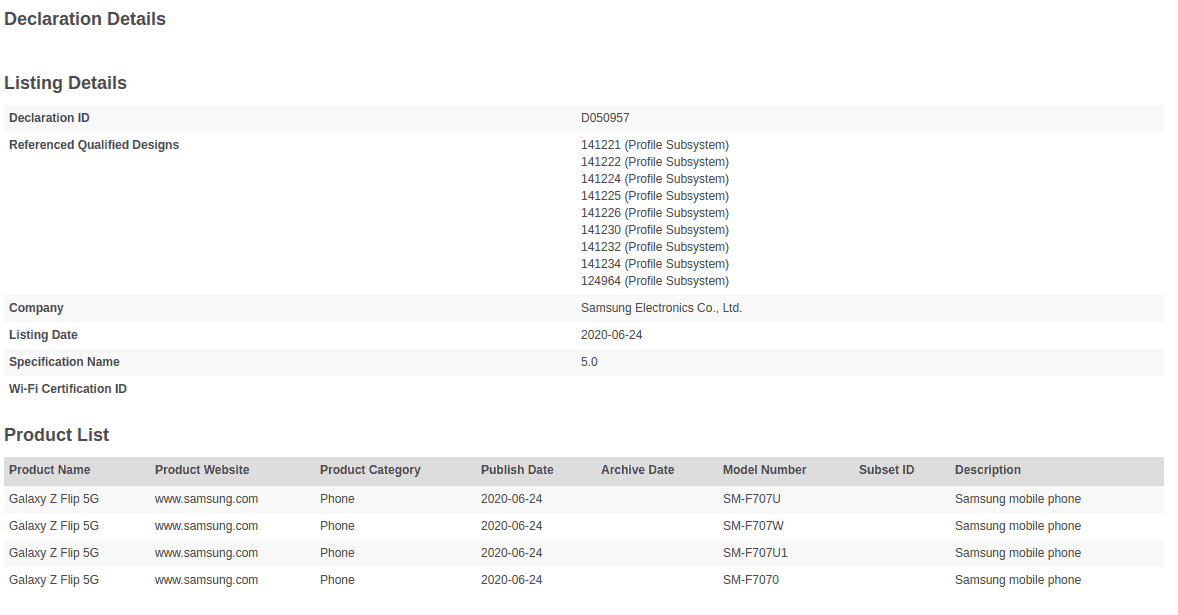 Interestingly enough, one of those listings don’t mention the phone’s name, but its codename instead, the ‘Bloom-X’. Bluetooth SIG also confirms that the phone will support Bluetooth 5.0, as expected.

The phone also got certified by the NFC Forum. The model that appeared there is the SM-F707U, one of the models that surfaced on Bluetooth SIG as well.

This certification confirms that the phone will support NFC, of course. That is not surprising either, as pretty much every mainstream smartphone does these days, not to mention the 4G variant of this device did as well.

The phone recently got certified by the 3C authority in China, confirming 25W wired, and 15W wireless charging. In other words, the same charging the regular Galaxy Z Flip has to offer.

Until recently, we thought that this phone will be identical to the 4G variant, except for the 4G modem. Well, a recent report claims that it will also ship with a new processor.

The Snapdragon 865 will probably fuel the device

Instead of the Snapdragon 855+, the Galaxy Z Flip 5G is said to include the Snapdragon 865. That is a generation newer processor, and it will definitely make the phone more appealing to some people.

We wonder how much will this boost its price, though. The Snapdragon 865 comes with a mandatory 5G modem only, and that boosts the price of that chip. We’re hoping Samsung has a plan for that.

There is still a chance that the Snapdragon 855+ will be included instead, but that’s unlikely. Except for a different SoC and 5G connectivity, the Galaxy Z Flip 5G will be the same as its sibling.