Samsung is working on multiple Galaxy M series mid-range smartphones. One of them is the Galaxy M51, which has now appeared on the benchmarking platform Geekbench bearing the SM-M515F model number. The listing also revealed some of the device’s key specs.

The Galaxy M51 seemingly features an octa-core Qualcomm Snapdragon processor with part number SM6150. This suggests it to be the Snapdragon 675.

However, there’s a possibility it may not. Firstly, Snapdragon 675 is an outdated processor now. Also, this phone is supposed to succeed last year’s Galaxy M40, which also featured this very chipset.

Since the Galaxy M51 will be comparatively costlier, it should get a better chipset as well. So this phone could launch with the Snapdragon 973 instead, which has been previously seen carrying the same part number. There’s also the possibility of a Snapdragon 720G processor. Nothing is set in stone yet, though.

The Geekbench listing also reveals the Galaxy M51 to have 8GB of RAM. The handset will run Android 10 out of the box, with possibly One UI 2.1 on top.

Since it’s a Galaxy M series phone, it’ll likely get the ‘Core’ version of Samsung’s custom Android skin, effectively stripping it of some features, such as Bixby Vision and Good Lock support.

Previous rumors suggest this phone to come in a 128GB storage variant, though a 64GB variant should also be available. The phone is also rumored to feature a quad-camera setup on the back, consisting of a 64-megapixel ISOCELL Bright GW1 primary sensor.

Other possible specs include a 5,000mAh or bigger battery with at least 15W fast charging, dual SIM support, and a Super AMOLED display of Full HD+ resolution. It could get a punch-hole display.

3D renders of this phone leaked back in March but the legitimacy of those renders had seemed doubtful. They showed the phone to feature only three rear cameras.

The device was also shown featuring two sets of volume controllers, although the source later clarified that it’s a mistake and the second setup is actually the SIM tray. We’ll get to know how much of it was accurate as we get closer to the phone’s launch.

A report back in January this year said that Samsung has begun production of the Galaxy M51 at its Noida factory in India. It’s been about six months since and the phone has remained as elusive as ever.

The COVID-19 pandemic could be to blame here, as Samsung has scaled-down its smartphone production due to the global health crisis. Newer reports suggest the Galaxy M51 could launch in India sometime next month. 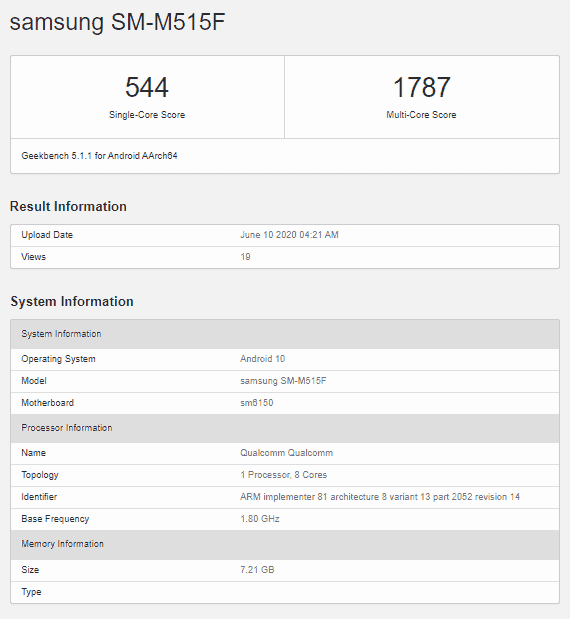