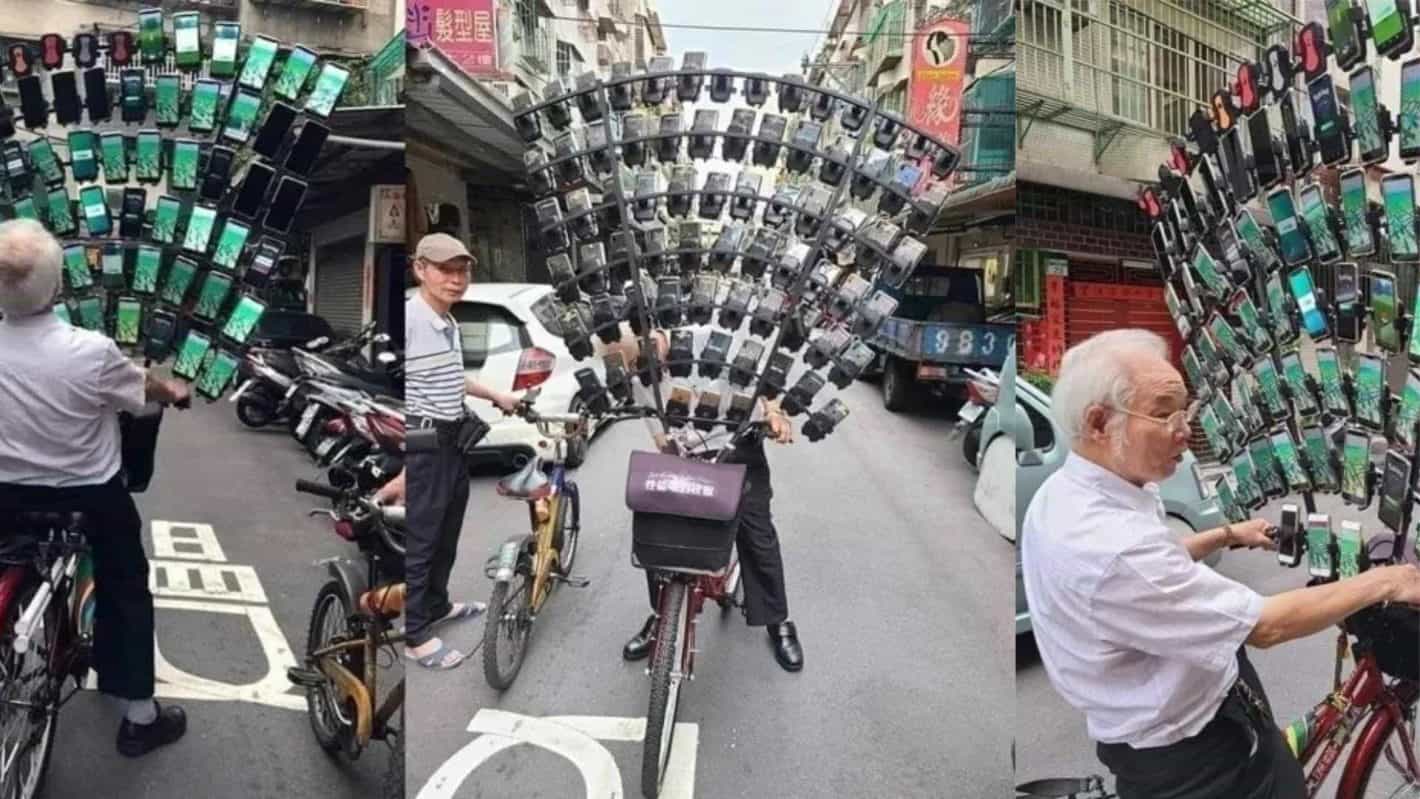 72-year-old retired Feng Shui master Chen San-yuan, also affectionately known as "Pokemon GO Grandpa" is now using 64 smartphones to play the game. The mobile pocket monster-catcher started gaining popularity back in 2018. That's after he was spotted toting around six smartphones set up to play the title, all attached to his bicycle, in May of 2018.

Those original images were shared by Redditor "readball." That's also the source of his nickname. Chen San-yuan was turned onto the game by his grandson.

In the interim between then and now, the avid Pokemon gamer has since upped his game, as noted above. Now, he's using no fewer than 64 phones, as highlighted in the images above. Those were shared via Facebook group Baofei Commune. Each phone pictured is set to play the popular mobile title, with the phones arranged into a fan-like array and attached to his bicycle handlebars.

Some of the mounts seen in the photo are actually empty. There's room for 72, overall. The phones are powered by a portable charger and what appears to be a masterclass-level wiring setup.

Can this be maintained even as Pokemon on the go is changing?

Since Pokemon GO Grandpa got his start playing the namesake title, the game has changed quite a bit. That's likely helped spur the continued growth of his gaming setup. For instance, the game is getting new features nearly every update to better merge the pokemon with the real world via AR.

The 72-year-old has garnered a lot of fans over the past two years across numerous reported sightings. And continued growth of his arrangement, of course.

But the game has also recently started to alter things so that users can stay at home amid the ongoing global health crisis. And that raises a few questions about safety. That's setting aside a few prominent concerns that were already being expressed.

And looking past whether or not it's safe for the aging gentleman to be out and about playing the title in a pandemic.

Users have commented on the images questioning just how dangerous the apparent desire to play the game might become. Among other things, concern center on whether the bike might become front- and top-heavy. For instance, when forced to brake hard or fast. Or whether or not it might be a traffic violation for him to ride in the street.

Other practical questions are raised too, regarding whether or not and how Chen San-yuan reaches the top-row of phones. That too could become dangerous for the 72-year-old.

Still, others joke about the possibility of corporate sponsorships to fill the remaining empty phone mounts.

Is this the final evolution of Pokemon GO Grandpa?

Regardless of where anybody comes down with regard to whether this has gone too far or for too long, the bigger question may be how long he can keep it up. Put another way, is this Pokemon GO Grandpa's final evolution?

There doesn't seem to be much room for growth, to begin with. Or at least not without adding weight to both the bike and what are arguably already reasonable arguments against the ongoing activity. And it's already a good question how he's running so many of the apps simultaneously.

But, as with Pokemon themselves, it may just be that changes can still be made to allow even more surprising growth. And it doesn't appear as though Pokemon GO Grandpa is quite ready to give it up anytime soon. Or at least not until his bid to catch them all has been fulfilled.