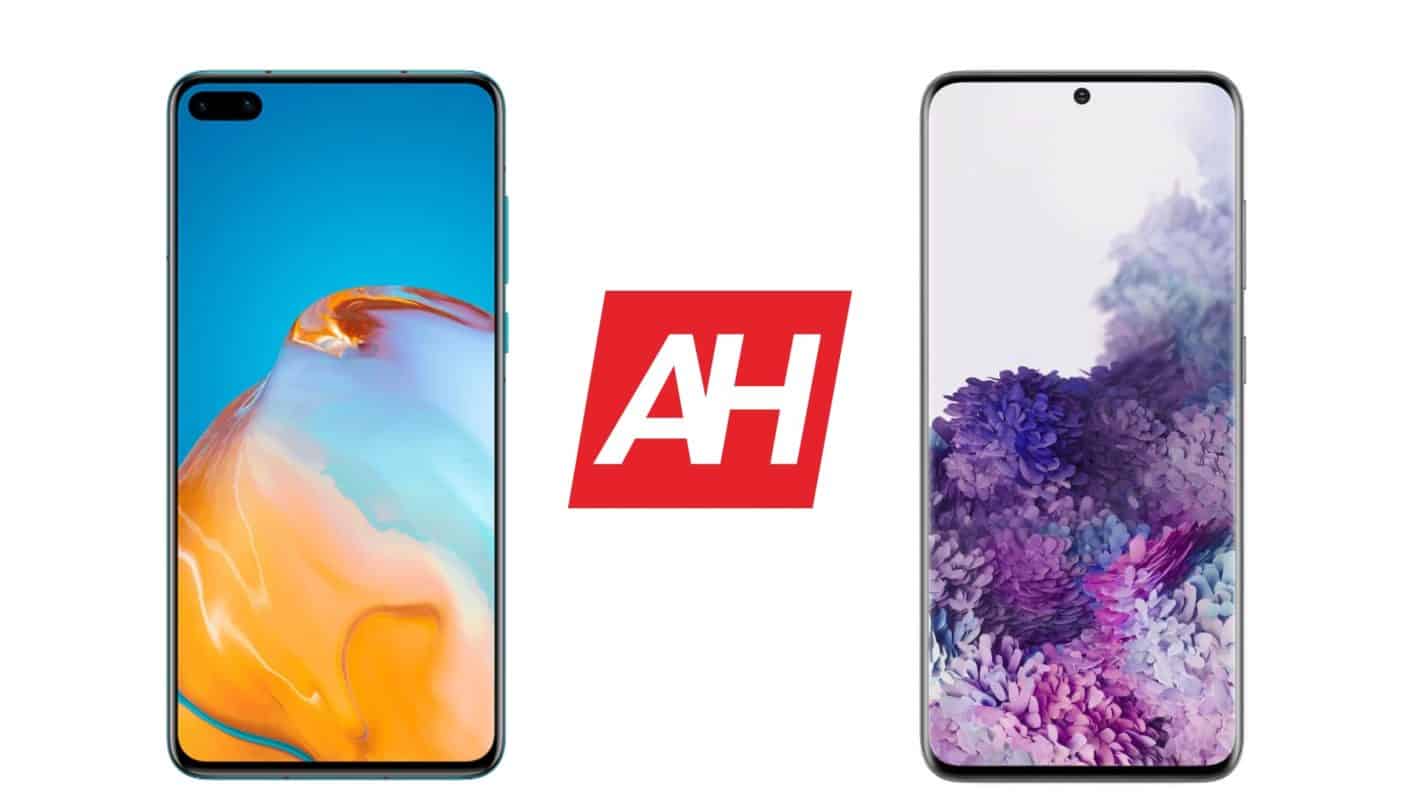 The Huawei P40 vs Samsung Galaxy S20 comparison is upon us. These two phones are both considered to be flagship offerings from their respective manufacturers. That being said, they're not the most powerful devices, their larger siblings take that crown. For someone who wants a phone that is a bit smaller, and more affordable, though, the Huawei P40 and Galaxy S20 are the way to go.

The Huawei P40 and Galaxy S20 are considerably more compact than the Huawei P40 Pro+ and Galaxy S20 Ultra, that's for sure. These two phones do have the same main features as their siblings, even though they're a bit inferior in some ways… like in the camera department, for example. The difference is not that big, though.

In any case, these two phones do have a lot to offer. As per usual, we'll first list the specs of these two phones, and then move to other categories. We'll compare their designs, displays, performance, and more. That's about it, it's time to kick off the Huawei P40 vs Samsung Galaxy S20 comparison.

In terms of the design, the Huawei P40 and Galaxy S20 are both similar and different at the same time. They look quite similar from the back, and they're made out of similar materials. From the front, though, they do look a bit different, and the in-hand feel is a bit different as well. Both of these phones are made out of metal and glass, and both are considered to be quite compact for today's day and age.

They both feel really good in the hand, and are good for one-hand use, even. The Huawei P40 is a bit shorter, wider, and thicker than the Galaxy S20. It is also a bit heavier than Samsung's handset, but the difference is not that big at all. As you can see, Huawei opted for a pill-shaped display hole in the top-left corner. Samsung, on the other hand, decided to utilize one display camera hole which is centered.

Samsung's solution looks more aesthetically pleasing, but Huawei's front-facing camera and sensors offer more usage options. Bezels on both phones are extremely thin, and the Galaxy S20 is the only one to offer a curved display. More on that a bit later. Both phones include multiple cameras on the back, and their camera modules are placed in the top-left corner. Both phones are curved on the back, towards the edges. Brandings from their respective companies are also placed back there. Both of them offer really solid design, and which to choose is more a matter of preference than anything else.

Now, both of these panels are great, but the Galaxy S20's does have an advantage. Not only does it offer more in terms of resolution, but that refresh rate makes everything extremely smooth on the display. Do note that you cannot use a 120Hz refresh rate and QHD+ resolution at the same time, at least that wasn't possible at the time of writing this article.

In terms of output, both panels are truly great. You'll get vibrant colors on both, and those deep OLED blacks. Viewing angles are great in both cases, and both displays are a joy to use, to say the least. The difference in resolution is almost impossible to notice, though the refresh rate difference is quite noticeable. If that's not something you want / need, the Huawei P40 benefits in the battery department thanks to the lower refresh rate, more on that later.

The Huawei P40 and Galaxy S20 are both extremely powerful smartphones. Both of these devices come with powerful internals, and in combination with their software, that translates to great performance. Both of these phones will be able to chew through anything you throw at them, with ease.

The Huawei P40 comes with the company's very own Kirin 990 SoC, along with 6GB / 8GB of RAM and Android 10 out of the box. Google's services are not included here, though. The Galaxy S20, on the other hand, packs in the Exynos 990 or Snapdragon 865 SoC, depending on the market. It includes 8GB or 12GB of RAM, that also depends on the market.

Regular, everyday tasks are a piece of cake for both devices. Gaming is no different, running graphically-intensive titles is not a problem. You won't notice major lag on either phone no matter what you do, really. These two phones are amongst the best-performing devices in the market at the moment, so don't worry about this aspect at all.

What about battery life? Well, there is some difference between the two phones. The Huawei P40 pulls ahead in this regard, a bit, probably due to its lower-res display, lower refresh rate, and software. The Huawei P40 does have a slightly smaller battery, though, at 3,800mAh, compared to a 4,000mAh battery pack inside the Galaxy S20.

The Huawei P40 does have a smaller display as well, on top of lower resolution and refresh rate. Chances are you'll be able to cross the 6-hour screen-on-time mark on the Huawei P40 without a problem… presuming you're not heavy on gaming. That will prove difficult on the Galaxy S20.

Do note that we assume you'll be using a 120Hz refresh rate in combination with fullHD+ resolution. If you lower that down to 60Hz, you'll get better results out of the Galaxy S20. The phone should be able to get you to 5+ hours of screen-on-time, though everyone's usage scenario differs, so… your mileage may vary.

The Huawei P40 also includes an IR TOF 3D sensor on the front, for advanced biometrics, while the Galaxy S20 does not. The Galaxy S20, on the other hand, ships with a single 10-megapixel front-facing camera. So, what about the results? Which one is more capable in terms of camera shots overall?

Well, that depends. It depends on the scenario, basically. Both are really good in good lighting conditions. The Huawei P40 does tend to offer more details, and realistic colors. The Galaxy S20 photos look more flashy due to heavier processing, and some people may prefer that. In low light, both are quite good, but the Huawei P40 can bright up such images more. Thanks to its quite useful low light mode, which allows you to fine-tune such images, you can basically light up a scene as much as you want.

In terms of audio, both phones are quite good, but… well, the Huawei P40 does not offer stereo speakers. The phone has a single, down-facing speaker. That speaker is great, but it's a mono speaker, so it cannot really compete with a stereo speaker setup on the Galaxy S20. Samsung's speakers are tuned by AKG, and they sound really, really good.

The Galaxy S20 offers rich sound, and the distortion is quite minimal. The Huawei P40 speaker is good, and most people won't mind, but it's easy to cover up with your hand. Neither of the two phones have a 3.5mm headphone jack, by the way. You'll need to use Bluetooth, or utilize that Type-C port on the bottom. In terms of audio via headphones, both phones are good, though the Galaxy S20 does have a slight advantage in lows and highs.