Qualcomm introduced its new Snapdragon 690 chip yesterday, and a new teaser suggests one of HMD Global’s Nokia phones may be the first to feature it.

The teaser itself comes from Juho Sarvikas, who is a Chief Product Officer over at HMD Global. He teased the upcoming Nokia phone, while congratulating Qualcomm on its new, Snapdragon 690 SoC.

You can see that image below this paragraph. As you can see, he’s holding a smartphone in his right hand. This image has been processed in a way we can’t see the details, other than the fact it will have vertically-aligned cameras on the back. 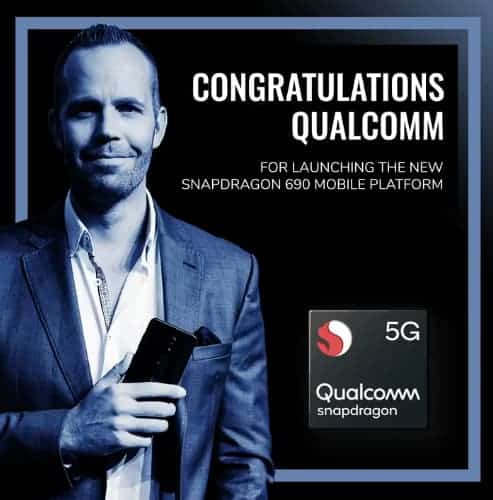 Snapdragon 690 will fuel the upcoming Nokia smartphone, 5G will be included

Mr. Sarvikas also confirmed that the device will offer 5G connectivity. That is a given considering the Snapdragon 690 got announced with 5G connectivity. We’re just not sure if Qualcomm will sell that chip without a 5G modem or not.

Now, this upcoming Nokia handset will probably be more affordable than the Nokia 8.3 5G. We’re not yet sure what the device will be called, but it could be the Nokia 6.3 or 7.3.

The Snapdragon 690 is actually a rather capable processor. This processor has been made using an 8nm manufacturing process. It brings a 20-percent better CPU performance compared to its predecessor.

It also offers a 60-percent increase in GPU performance over the Snapdragon 675, which is quite a considerable difference. This chip comes with the Snapdragon X51 modem for 5G connectivity.

Qualcomm’s Quick Charge 4+ fast charging is also supported by the Snapdragon 690, by the way. All in all, there’s a lot to like when it comes to this SoC, it’s a considerable improvement over the Snapdragon 675.

This processor will be used in a ton of phones by the end of 2020. Several companies already confirmed that their phones are coming, and Qualcomm promised more to come.