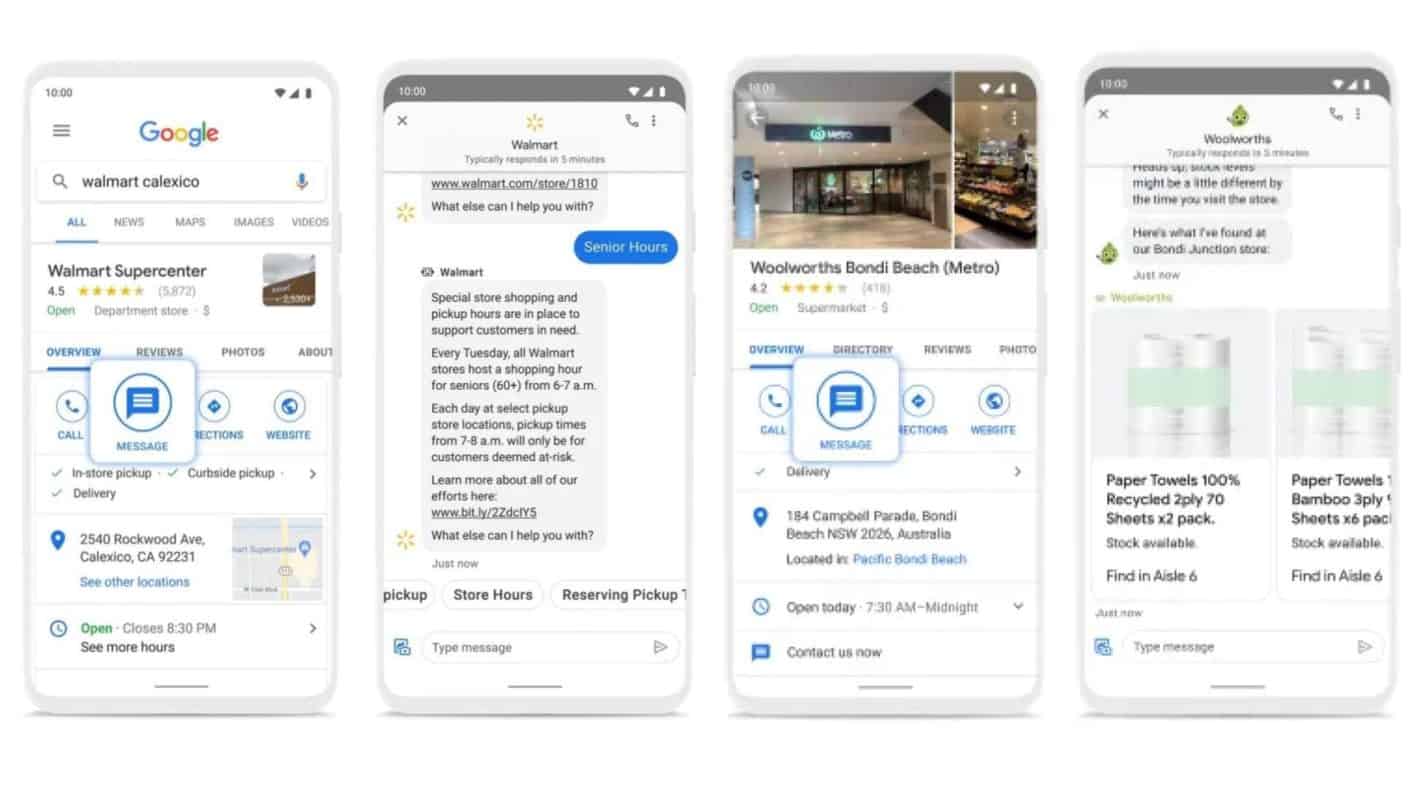 Google is launching a new expansion for Search and Maps messaging services to include more business types and an easier UI. That's based on recent reports stemming from the company's announcement of the expansion for Business Messages.

At least part of the expansion is a bid to help users deal with ongoing COVID-19 restrictions and concerns. The company points explicitly to Australia's Woolworths, noting that customers can search for products and see availability and aisle information. But that they can also get details about hours and updates related to the disease for easier shopping.

A similar experience can now be had at Walmart too.

DISH, meanwhile, has worked with its partner [24]7.ai and the new features to reduce the service handling time in Business Messages by 22-percent.

And, in India, MyGov has partnered with Amplify.ai to provide help and answer live questions from Indian citizens. Especially as that pertains to "hours, COVID-19 helplines, and ways to volunteer and donate, for more than 11,000 food and night shelters across India."

All of these experiences are being driven by new features in the service, added by Google. The company has added smart replies, product carousels, and unique welcome messages to start. And that's undoubtedly helping drive lower response times, better up-to-date information, and more. But it also stacked in changes to make moving from automated responses to a real customer service specialist easier.

What's in store for Maps, Search messaging in the future?

Google is also reportedly working on bringing Business Messages to mobile websites outside of Maps. And, of course, that will involve changing how and where it's surfaced. That could, theoretically, lead to other changes too. Namely, the tool could make its way into other apps too via direct integration, if Google chooses to go that route.

Integration with customer service platforms, conversely, is part of its plan moving forward. And that could, potentially, lead to the type of in-app integrations mentioned above. That would allow Google to compete more directly with platforms such as WhatsApp and Snapchat, which offer business-direct messaging. But, combined with its current mapping data and other business tools, that could be more localized.

More details about exactly what Google's plan for the integration are will undoubtedly be revealed as it finalizes changes.

In the meantime, the search giant is additionally working to provide support in languages other than English. That's presently the only supported language but it says others are planned, at the very least.

When is all of this going to be available?

Google messaging services in Search and Maps has been available since 2018, long before this most recent expansion. But the newest updates to the service are rolling out now. That means that users should be able to log into either Google's primary search website or to Google Maps directly, search up a business, and start messaging with the new features.

If it's not already available, because this is a server-side change, it will be sooner than later.

But where, precisely, the above-mentioned features are available might vary from business to business. As with quite a few changes Google has announced, both in and outside of maps, the search giant is responsible for the additional expansion on the tool. But it's ultimately the businesses that are responsible for implementing it.

So the changes should appear quickly but not necessarily everywhere at once.