The Google Pixel 4a is right around the corner, and some more info just surfaced, including the phone’s display size. This information comes in the form of a leaked image, shared by TechDroider.

This seems to be a picture taken with a phone, from some sort of a listing. Take this leak with a grain of salt, of course. 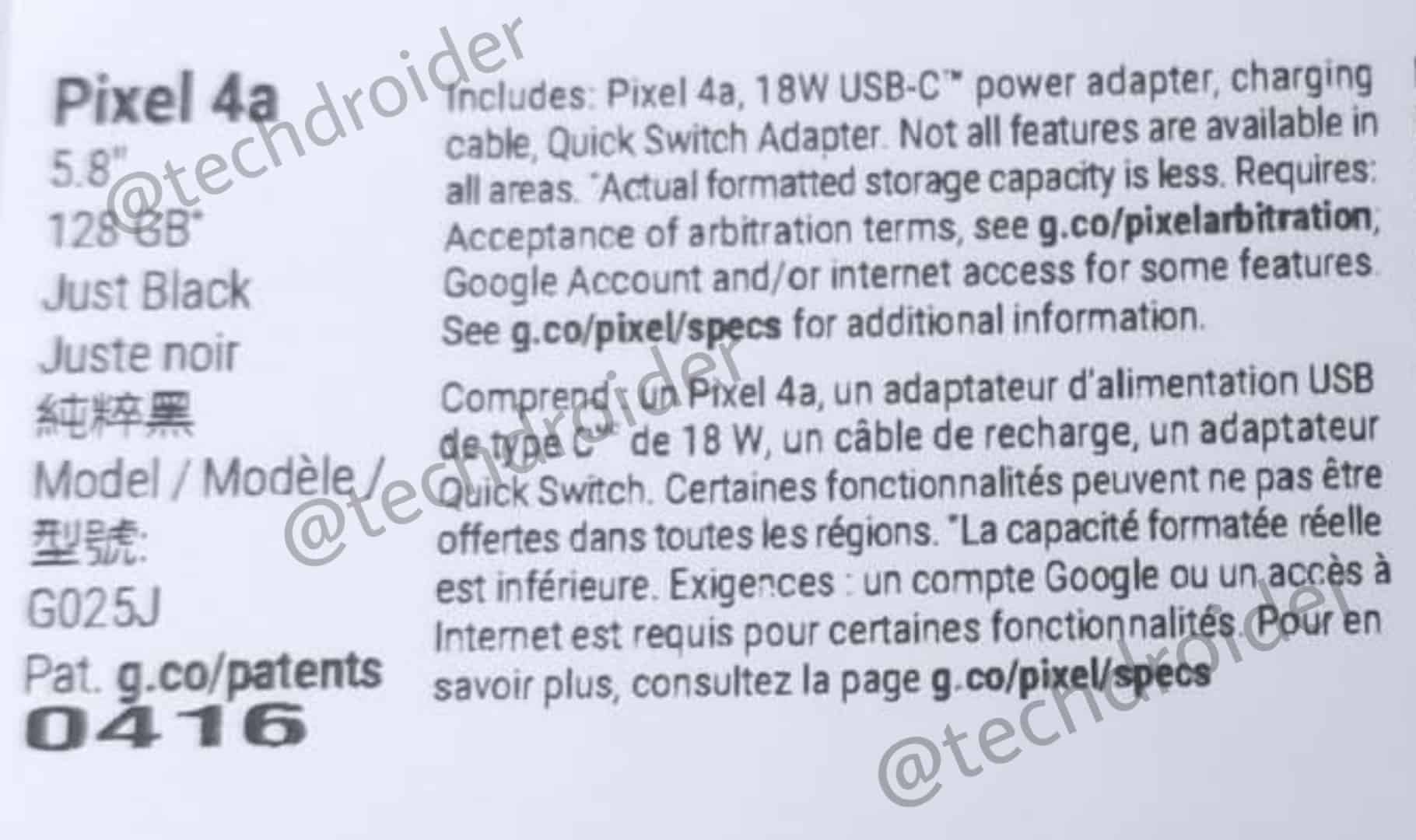 The Google Pixel 4a display size leaks, as it seems like 5.8-inch display is in store for the device

The ‘Pixel 4a’ name is clearly stated here, along with quite a bit of information. As far as the Google Pixel 4a display size is concerned, this image claims it will feature a 5.8-inch panel.

The display resolution is not mentioned here, but we’re almost certainly looking at a fullHD+ AMOLED display. We’re hoping it will be a 90Hz panel, but that’s not likely.

This listing also mentions that the device will include 128GB of storage. There’s a good chance Google will release more than one storage variant, though. This seems to be a ‘Just Black’ variant of the device.

This listing also notes that the phone will feature a Type-C port, which will be placed on the bottom, most certainly. 18W charging is also included here, as a ‘USB-C power adapter’ is mentioned.

That is pretty much all the information shared by this leak. The Google Pixel 4a is expected to arrive on July 13. That is the date that has been mentioned several times thus far.

The phone is, however, rumored not to go on sale straight away. Some rumors mentioned a September release, while others claim it will be October. In any case, the phone will launch next month.

The phone will not support 5G

The Google Pixel 4a is coming without 5G, by the way. The phone will be fueled by the Snapdragon 730 64-bit octa-core processor, mainly due to cost-cutting reasons.

The Snapdragon 765 would be a more logical choice, even without 5G, but it seems like Google went the opposite way. The phone is expected to include 6GB of RAM, by the way.

The main camera from the Google Pixel 4 will be included on this device. So, you can expect to get a 12.2-megapixel camera. We’re not sure about other cameras, though.

Android 10 will come pre-installed, of course. The device will be made out of polycarbonate (plastic), most probably. Wireless charging support is still in question, but it’s possible it will offer wireless charging.

Advertisement
Trusted By Millions
Independent, Expert Android News You Can Trust, Since 2010
Publishing More Android Than Anyone Else
0
Today
164
This Week
164
This Month.
857
This Year
110991
All Time
Advertisement