Along with the ROG Phone III, ASUS could also be working on a new flagship smartphone under its ZenFone series.  A mysterious ASUS phone has appeared on the benchmarking platform Geekbench, revealing a few details.

According to the Geekbench listing, the new ‘asus ZF’ will be powered by an octa-core Qualcomm processor operating at a base frequency of 1.80GHz. The chipset is codenamed ‘kona,’ so it is none other than the Snapdragon 865.

The listing also mentions a whopping 16GB of RAM, so this phone should be capable of delivering a massive performance. The device scored 973 in the single-core test of Geekbench v5. In the multi-core test, it scored 3346. This ASUS smartphone will run Android 10 out of the box.

It will likely arrive as the ASUS ZenFone 7

ASUS announced the ZenFone 6 flagship in May last year. A year on, we are yet to hear about its successor. However, it now appears to be taking shape. The new ‘asus ZF’ that recently popped up on Geekbench should be none other than the ASUS ZenFone 7.

Back in February, Qualcomm had released a press note that revealed that the ASUS ZenFone 7 will be powered by the Snapdragon 865 SoC.

ASUS itself has yet to share any details about the ZenFone 7. The ZenFone 6 arrived last year with a flipping dual-camera module on the back. The motorized camera module could flip up and double as the selfie cameras as well. It remains to be seen if its successor will have any such standout feature.

Although the ASUS ZenFOne 7 is listed with 16GB of RAM on Geekbench, it should come in multiple variants with lesser amounts of RAM as well.

Reports are that both the Rog Phone III and the ZenFone 7 will arrive at the end of the second quarter or early in the third quarter this year. These two handsets will be the first 5G-equipped phones from the Taiwanese company.

It’s unclear if the two phones will launch together, though. The upcoming gaming phone from ASUS has already picked a couple of necessary certifications, suggesting an imminent launch.

To recall, the ZenFone 6 launched as ASUS 6z in India owing to a legal issue. The Taiwanese phone maker is banned from using the Zen, ZenFone, or any other identical branding in the country.

So the new ZenFone 7 will also likely arrive as the ASUS 7z in the world’s largest second-smartphone market. 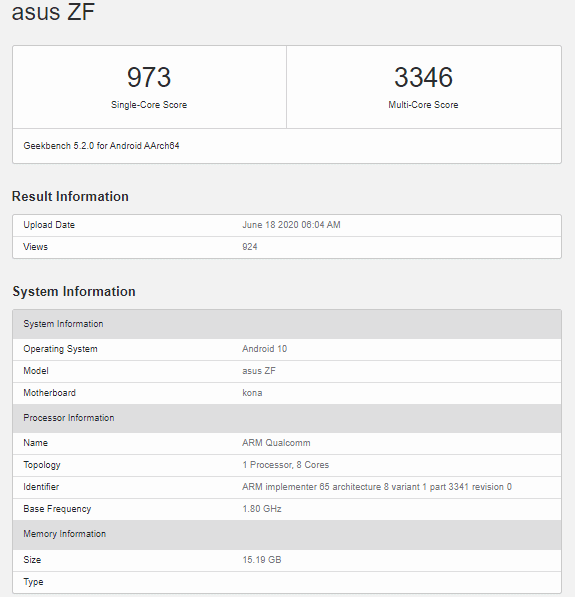