Skip to content
Advertisement
Trusted By Millions
Independent, Expert Android News You Can Trust, Since 2010
Publishing More Android Than Anyone Else
27
Today
27
This Week
478
This Month
2417
This Year
112496
All Time
Advertisement Now, the global health crisis probably played a part in all that as well, so take that into consideration. Apple managed to retain the number one spot, though its smartwatch shipments also declined.

Apple sold 4.6 million Apple Watches in Q1 2019, while that declined to 4.5 million in the same period this year. It’s not a huge difference, but still, Apple is not an exception here. 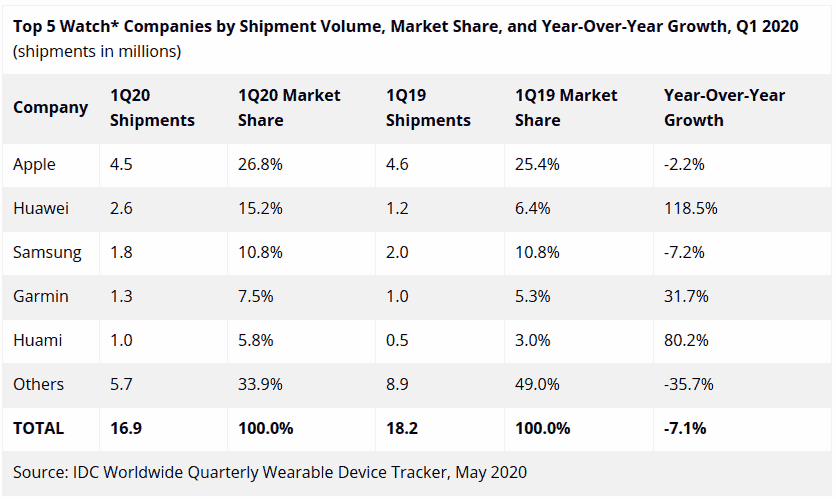 Huawei, interestingly enough, managed to increase its sales in Q1 2020. It sold 2.6 million smartwatches, while it moved only 1.2 million in Q1 2019. It’s a rather considerable growth of 118.5-percent.

Samsung’s smartwatch sales dropped by 7.2-percent, while Garmin’s grew 31.7-percent. The fifth company on the list is Huami, who managed to sell 1 million smartwatches in Q1 2020. The company managed to ship out 0.5 million in the same period last year, so that’s a boost of 80.2-percent.

Now, Apple is still first on the list as it holds the biggest chunk of the market share. Apple holds 26.8-percent of the smartwatch market. Huawei follows with 15.2-percent, while Samsung is third with 10.8-percent.

Garmin managed to grab 7.5-percent of the market in Q1 2020, while Huawei holds 5.8-percent. All other smartwatch companies are holding 33.9-percent together.

To sum up, smartwatch sales dropped by 7.1-percent in Q1 2020 (YoY). The global health crisis definitely played a part in that, though, and things could have been different.

Now, IDC also released a list of top 5 wearable device companies. That list includes hearables as well, by the way, in addition to regular wrist wearable devices, and so on. 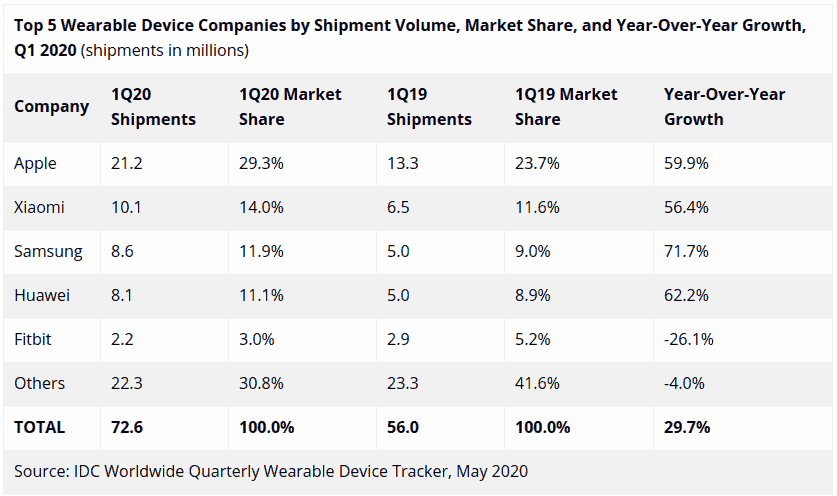 Fitbit rounds up this top 5 list with 3-percent of the market. All other companies are holding 30.8-percent of the wearables market. Wearable shipments grew 29.7-percent in Q1 2020 (YoY).

Top four companies shipped more wearables in Q1 2020 than in the same period last year. Fitbit, on the flip side, managed to ship less.