Samsung is never one to sit on the sidelines, and the company is back with the world’s first QRNG smartphone, the Galaxy A Quantum.

In addition to the size of its security chipset are the cryptography protocols. The Quantum provides two-factor authentication (2FA). 2FA will work for T-ID, SK Telecom’s single ID platform. T-ID allows SK customers to use one ID to login to 28 SK services. Most phone users are familiar with 2FA as necessary to prevent their email accounts from being illegally accessed.

Biometric authentication, the use of fingerprints, is available as well. Biometric ID allows users to maintain security while using the SK Pay app to make purchases and payments. The SK Pay app comes with SKT 5GX Quantum protection for user fingerprints.

Samsung’s newest Galaxy A smartphone is due to the Korean giant’s partnership with ID Quantique and SK Telecom. ID Quantique is a Geneva, Switzerland company specializing in quantum cryptography. SK Telecom is a South Korean wireless provider.

Why make a Quantum Security phone? 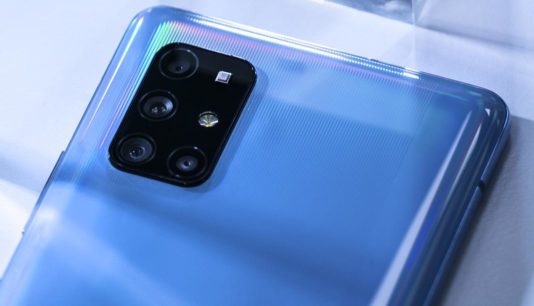 Why does the Quantum exist? The answer is simple: it provides the most advanced cryptographic security of any smartphone on the market right now.

The phone utilizes random number generator technology, a system that changes numbers and their placement multiple times a day to deter hackers. Hackers often bank on smartphones retaining the same number code, by which they hack into smartphones, even encrypted ones.

In addition to the QRNG, the Quantum also brings two-factor authentication (2FA) and biometric ID, which are essential for so many smartphone users today. But to add to the general consumer encryption protections is blockchain. Blockchain works similarly to QRNG. It takes digital information in blocks and distributes the information across all computers on the network.

Each blockchain has a copy produced on every computer in the network. Should a hacker change one block, he or she must change every other block on the chain as well to penetrate the network. The “distributed ledger” of blockchain technology makes it extremely difficult (though not impossible) for hacker infiltration.

Good cryptography is key to security and peace of mind, and it requires the best in encryption. The Quantum is a phone equipped with the latest business encryption technologies for user protection.