The OnePlus 7T vs OnePlus 8 comparison is upon us. Many people are probably wondering whether it’s worth upgrading to the OnePlus 8. Or, what is the better buy at the moment, as OnePlus is currently sending both devices. That is what we’re here to answer, pretty much, as both of these phones are quite compelling, and similar in some ways.

Those of you who are not looking to spend a ton of money on the OnePlus 8 Pro, however, are probably considering getting the OnePlus 7T or 8. Well, we’ll compare the two phones in a number of categories. We’ll start things off by comparing their spec sheets, and then move to the design, display, performance, and several other categories. That being said, let’s kick off the OnePlus 7T vs OnePlus 8 comparison, shall we.

As far as the design is concerned, these two phones are similar, to a degree. Both phones are made out of metal and glass, and they do have a similar in-hand feel. The OnePlus 8 is a bit narrower, though, and that is something we’ve noticed. They’re about equally as tall, and the OnePlus 8 is 10 grams lighter. You won’t notice that weight difference, though. The point is, neither of them is too heavy, and the weight distribution is well-balanced.

Both devices are extremely slippery, though. They are made out of metal and glass, so that’s not surprising. The vast majority of you will probably want to throw a case on both of these devices. Both of them have fairly thin bezels. The OnePlus 7T opted for a waterdrop display notch, while the OnePlus 8 has a display camera hole in the top-left corner. Many would argue that the notch is less intrusive, but… it’s all a matter of taste. The hole punch approach is definitely more modern, if nothing else… as that is the trend with smartphones these days.

The OnePlus 7T comes with a flat display, which most people prefer

The display size on these two phones is the same, and that goes for their aspect ratio as well. Both phones feature a 6.55-inch display with 20:9 aspect ratio. Display tech is also the same, and so is the resolution. Both phones include a fullHD+ (2400 x 1080) Fluid AMOLED display with 90Hz refresh rate. Where they do differ is the curvature. The OnePlus 7T includes a flat panel, while the OnePlus 8 comes with a curved display.

As mentioned in the design section of this comparison, the OnePlus 8’s display is not extremely curved, though. It does not have a waterfall display, nor something along the lines of the OnePlus 7 Pro / 8 Pro. Its curvature is closer to that on the Galaxy S20, so it’s not too bad. Both displays are protected by a sheet of Gorilla Glass 5, and both panels support HDR10+ content, by the way.

What about real-life use? Well, both displays are great, actually. These two panels are very similar in terms of what they deliver. They are amongst the best fullHD panels in the market, that’s for sure. Blacks are quite deep, while both displays are extremely vibrant. That 90Hz refresh rate helps the content feel extra smooth, and you have plenty of display settings to play around with. If you like your displays vivid, you’ll be right at home here, if not, there are settings for that as well. They are extremely similar, though, so we cannot really select a winner here.

Even in the performance aspect, these two phones are extremely similar. There’s no doubt that the Snapdragon 865 SoC, that is included in the OnePlus 8, is a more powerful chip. The Snapdragon 855+, which lies inside the OnePlus 7T, is also a great processor. It cannot measure up to the Snapdragon 865 on paper, but in regular use, you really won’t see much of a difference between the two.

That actually goes for gaming as well. Both phones will run basically anything you throw at them with ease. Both are equipped with plenty of LPDDR4X RAM, and UFS 3.0 storage. If you add a 90Hz display on top of that, you’ll get a really nice package here. Everything will seem really smooth on their displays, no matter what you’re doing.

These two phones can handle anything you set your mind to. They’re extremely fast when it comes to opening apps and multitasking. Multimedia is no issue, and the same goes for gaming. Even when you set them side-by-side you will not notice much of a difference in the performance aspect. The OnePlus 8 will load a game a split second faster, but that’s about it, both will run the same, basically. 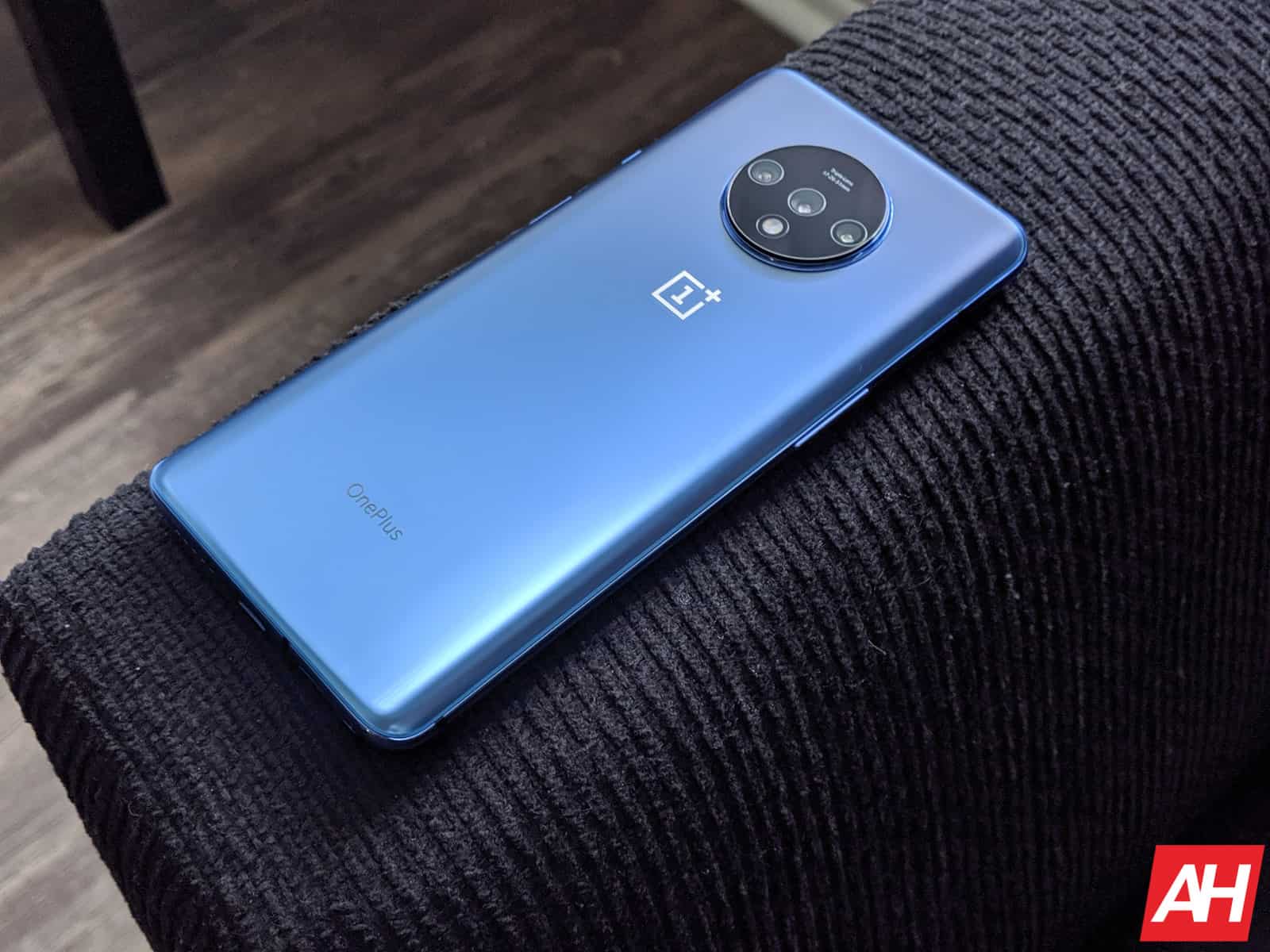 Not only does the device have a larger battery, but it also has a more battery-friendly SoC. You’ll easily get over 7 hours of screen-on-time on this device on any given day. We’ve even been able to get over 8 hours after the initial updates. The OnePlus 7T is no slouch either, 6-6.5 hours of screen-on-time should be doable for most people. That will vary, of course, depending on your usage.

If you’re gaming a lot on these two devices, you can expect lower numbers than that, of course. Even if you deplete the battery ahead of time, that’s not an issue thanks to OnePlus’ fast charging. Both of these phones support 30W fast wired charging, though neither of them support fast wireless charging… or wireless charging at all. All in all, the OnePlus 8 is a better choice when it comes to battery life, it offers more in that regard.

Both the OnePlus 7T and OnePlus 8 have three cameras, and most of them come with identical sensors. They do include the same front-facing camera, the main rear camera, and an ultrawide unit. You’ll find a 48-megapixel main camera on the back of these two phones, Sony’s IMX586 sensor. The OnePlus 7T does come with a wider aperture lens on that camera, though.

In addition to that sensor, the OnePlus 7T also includes a 12-megapixel telephoto camera, and a 16-megapixel ultrawide camera. The OnePlus 8 comes with that same ultrawide camera, though with a slightly different lens. Instead of a telephoto camera, it includes a 2-megapixel macro unit. We don’t know why OnePlus opted for that camera, considering that images from it are not detailed enough, and quite frankly the OnePlus 7T can take better macro shots with its main camera.

Ultrawide shots are quite similar

In terms of ultrawide shots, they’re quite similar on these two devices. They’re good, but are not as good as the ones the OnePlus 8 Pro can provide. That is understandable due to completely different sensors. As far as the main camera goes, well, the pictures turn up good, but somewhat different.

You wouldn’t expect that considering this is the same sensor we’re looking at, but there you go. The images from the OnePlus 8 have a cooler tint on them, and tend to be a bit sharper in some scenarios. In most cases, though, they’ll be of the same quality, but with a different tint / image temperature. They offer really good dynamic range also. In the nighttime, you can get some good shots with the main camera on these two phones, especially with the help of nightscape, but don’t expect wonders from the ultrawide camera.

Selfie shots end up looking really good as well, as long as there’s enough light included. These two cameras are too similar to select only one. The OnePlus 8 does have an advantage in some cases, but those differences are almost negligible. On the other hand, the OnePlus 7T offers a telephoto lens, and along with it, optical zoom.

Does the OnePlus 8 offer better audio quality? Well, no, not really. That’s not to say that the phone offers bad quality audio, not at all, it’s just not better than the 7T’s. They are on the same playing field in terms of audio quality, I’d say. They both include stereo speakers, and those speakers are really good. They get plenty loud, and they’re sharp enough, while they offer some bass as well. The distortion is minimal at high volumes, barely noticeable.

A 3.5mm headphone jack is not included on either phone, but you can utilize a Type-C port, and Bluetooth headphones with this phone. Audio via headphones is also really good. The highs are especially good, while the mids and lows are not bad either. The mids are better, though, as long as you have a quality pair of headphones to use, of course. All in all, chances are you won’t be disappointed with audio quality here.

So, as you can see, these two phones are… for the most part, quite similar. If you really want a newer SoC, and 5G, plus some battery benefits, the OnePlus 8 is worth it. Otherwise, it may be wise two stick to your OnePlus 7T, or even get one at this point in time. That device is now around $200 more affordable in the US than the OnePlus 8. That is not the case in Europe, not at all, but in the US, the phone sure is worth it. If you live in Europe and are wondering which to get, we’d say you should go for the OnePlus 8. The difference in their price tags is smaller and getting the newer model is justifiable.