OnePlus has just added a rather interesting feature to its Launcher for Android, support for Freeform Windows. This feature is not enabled by default, but you can easily enable it via Developer Settings.

Before we share how you can enable it, let's talk about the feature for a second. We're sure that some of you know what Freeform Windows are. This feature basically allows you to minimize the app to a floating window that you can drag around the display.

You may have seen something similar on other smartphone platforms already. Do note that this is still a test feature, which is why it's in the Developer Options. It still doesn't feel finished.

The Freeform Windows feature in OnePlus Launcher is here, but it's not fully finished

That makes this feature considerably less usable. What point is it having a floating window if you cannot use it on top of another app, right? Well, yeah. We're guessing that something like that will be possible in the near future, though.

At the very least, you can try out this feature for yourself. You'll need to enable Developer Settings first, if you haven't done that before. Head over to 'Settings', and to the 'About Phone' section.

There, you'll need to tap the 'Build number' repeatedly, until you see a toast message saying you've become a developer, essentially. Now, go to 'Settings' once again, then to 'System', and find the 'Developer Options' menu.

In it, you'll need to look for the 'Enable freeform windows' toggle. Enable it, and reboot your phone, because without it, it won't work. Once you do that, you can launch the overview menu, hold down your finger on an app card, and launch it as a floating window.

As already mentioned, OnePlus Launcher did bring this support, but the Freeform Windows support in it is not that useful at the moment. OnePlus needs to enable you to use those floating windows on top of other apps, and more than one at the same time.

This feature actually follows yet another interesting change in OnePlus Launcher. Not long ago, OnePlus changed up the multitasking menu. It added a scrollable strip below app cards.

It also made app cards smaller than they were, and removed the three-dot menu. Instead of tapping those three dots above app cards, you can now hold down your finger on a particular card to get those options.

Another visual change can be found below app cards. Instead of an 'X' icon that removes all app cards, you now get the 'Close Apps' button. App icons are also not visible above cards, instead, only their names are included. 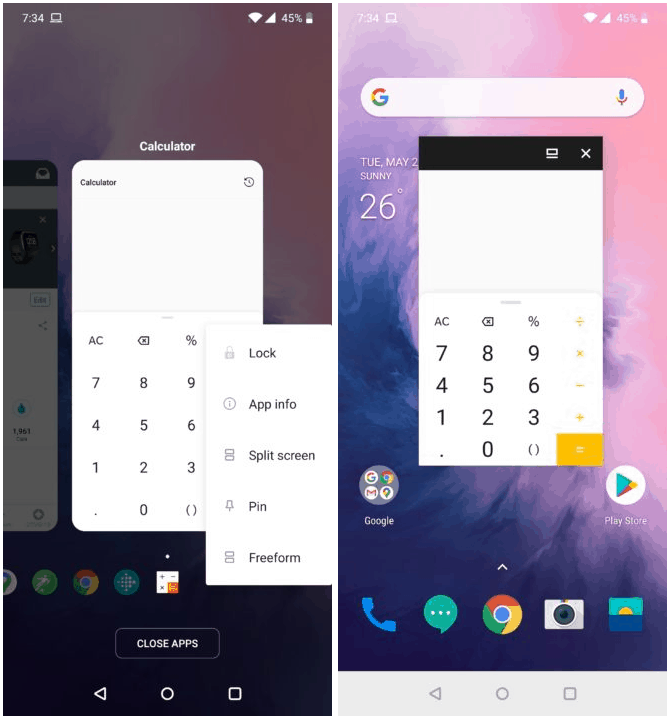