The Motorola One Vision Plus certification has appeared, and confirmed some of its specs. The device got certified by Geekbench, as you can see in an image provided below.

Geekbench certification reveals some Motorola One Vision Plus specs

This certification confirmed some of the Motorola One Vision Plus specs, such as the Snapdragon 665 SoC. That is Qualcomm's mid-range processor, and an octa-core chip.

It's a good processor, but not exactly the best the company has to offer in the mid-range category. This is supposed to be a budget phone, though, so the chip choice is understandable.

This processor managed to score 310 points in the single-core, and 1,351 points in the multi-core test on Geekbench. Those are not great results, but do note that this is probably the pre-production model.

This listing also reveals that the phone will include 4GB of RAM. On top of that, Android 9 Pie is mentioned here. That is a bit odd, we'd expect Android 10 to be pre-installed at this point in time, but there you go.

This listing popped up on May 28, so it's quite new. We're still hoping that Android 10 will come pre-installed, but that doesn't seem likely at this point.

This handset did surface in the Google Android Enterprise Directory not long ago. That listing also mentioned Android 9 Pie, and 4GB of RAM. It did reveal some additional spec info, along with the phone's render.

The phone will feature a 6.3-inch display, and include a fingerprint scanner

The device will feature a 6.3-inch display, it seems. On top of that, you can expect to see 64GB
of storage inside this phone. A fingerprint scanner will also be included, along with an NFC chip.

Now, in terms of the phone's design. Based on the Google Android Enterprise Directory, the phone will include a dewdrop display notch. The phone's bezels will be quite thin.

We still do not know what will this phone's back side looks like, though. It does seem like it will be a bit different than the Motorola One Vision, as that handset includes a display camera hole.

The Motorola One Vision Plus will probably feature a display with a 21:9 display aspect ratio, as that is what the One Vision offered. We're expecting to a see a fullHD+ display here.

We're not sure when this phone will arrive, though. It's expected to launch soon, but Motorola still hasn't confirmed anything. Once some new information does pop-up, however, we'll make sure to let you know. 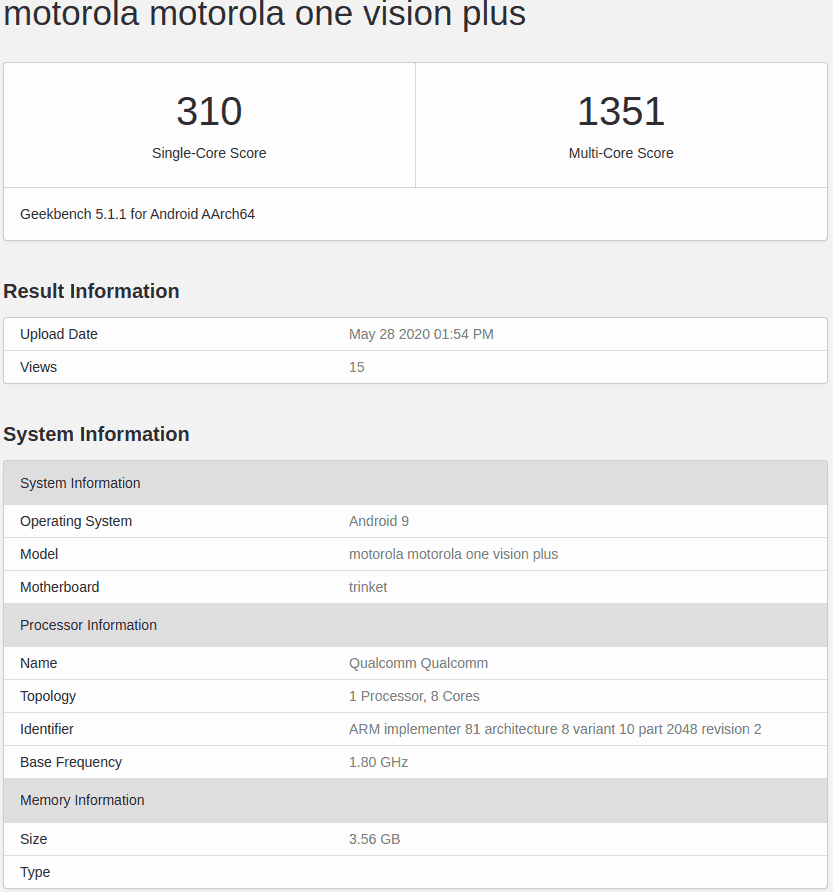