Yesterday, NVIDIA laid out its plans for games on GeForce NOW going forward with a new policy, and these are the newest titles being added to the platform as of today.

Altogether there are 26 new games being added into the GeForce NOW library. The newest GeForce NOW games are also all titles coming from publishers which have opted into the new policy that NVIDIA laid out.

Which means they won’t be leaving due to publishers requesting a removal. This makes every new game added today the first round of game titles that are helping the stabilization. Players can expect more of this down the road too.

Focusing more on the new opt-in policy, one game in today’s lineup includes a title that was previously removed. And is now coming back to the platform.

The Long Dark, which was previously removed, is one of the titles that was made available today. Showcasing that the new opt-in policy is doing what it was intended to do. Bring back publishers.

Though some may have been hoping for titles from Bethesda and Activision-Blizzard, The Long Dark is still a decent game. It’s also paving the way for other publishers to bring their games back as well. And who knows, maybe that will include some of the bigger ones in the future.

For now, though, GeForce NOW members can rejoice in the fact that more news games are here. And that publishers do seem to be interested in moving forward with cloud gaming.

Out of the 26 new games, three of them are new releases entirely, having just launched on PC earlier this week and in the later part of last week.

For example, both Saints Row: The Third Remastered and Strategic Mind: Blitzkrieg launched on PC on Friday May 22. And the third game is Maneater which released on PC on Monday May 25.

GWENT: The Witcher Card Game is also now included. Though you can already play this game on the go thanks to the mobile version that’s available for Android, this gives you a way to play the PC version on the go if that’s where your progress is. 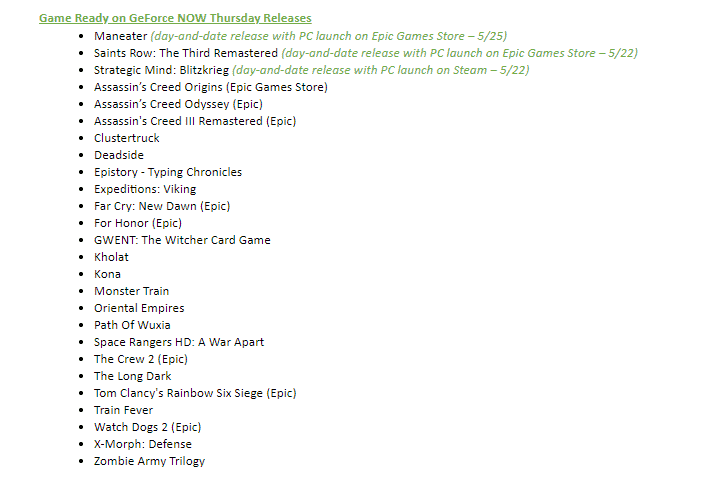